Ayala Kerem and Max Milne win at the RAB CWIF over the weekend. 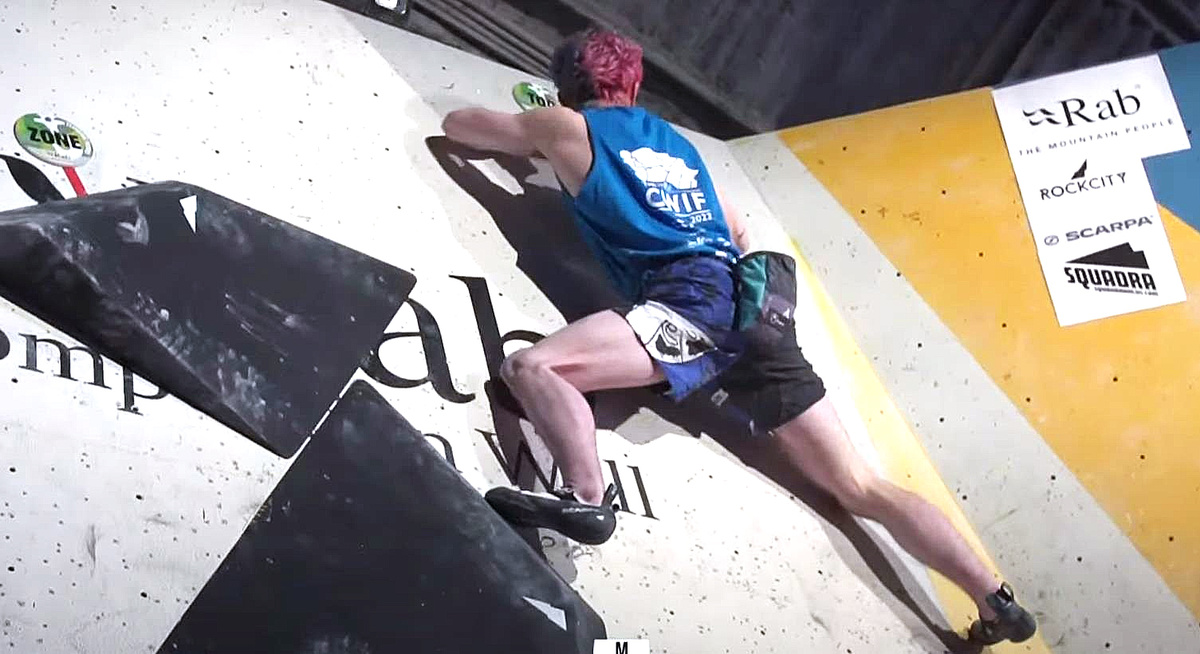 Back for the first time since 2020, an excited crowd watched the hungry competitors getting to grips with all the latest shapes and holds at the RAB Climbing Works International Festival over the weekend. As usual, the CWIF was an open event so Saturday’s qualification featured aspiring ‘locals’ as well as a pretty full field of UK bouldering aces and some big name stars which this year included Alex Megos and Ukrainian Jenya Kazbekova.

Big news once the dust had settled on qualification day was Will Bosi’s scorecard. Finishing with a perfect score of 300 points, Will had flashed all 30 blocs! Sadly however, Will didn’t return for the Sunday’s rounds stepping aside to make final preparations for a climbing trip!

Sunday morning’s semis were no less contested either. Holly Toothill and Max Milne (a.k.a. Max the Future) came out on top leading the field into the finals both climbers having flashed all four semi blocs in a very impressive display of climbing. Joining Holly were Michaela Tracy, Jenya Kazbekova, Ayala Kerem (Israel), Lucy Garlick and Zoe Peetermans. Accompanying Max into the finals were Nathan Phillips, Alex Megos, Toby Roberts, Jim Pope and Hamish McArthur.

Lead by head setter, Rob Napier (@enigmaclimbingproducts), the spicy four-bloc final included techie high risk slabs as well as super burly power problems. Toby Roberts was ever so slightly in front in the men’s by the halfway point with a perfect two tops in two attempts but Max Milne was very much breathing down his neck with two tops in three attempts.

Max, undoubtedly drawing on his senior WC bouldering experiences, maintained his form for the final two blocs flashing them both to finish with four tops in five attempts. Impressively, Max Milne managed to flash M3, a dirty, techie slab with a final heinous rock-over; it proved crucial for Milne as all the other competitors struggled with only Megos and McArthur topping it after multiple attempts. Toby, in his first CWIF final and the youngest finalist, fell foul of M3 falling repeatedly off the final heinous rock-over but otherwise matched Max pretty much bloc-for-bloc. His second place finish however demonstrates the strength in depth of this very capably young climber. Hamish McArthur snatched 3rd place marginally ahead of Alex Megos. Nathan Phillips and Jim Pope finished with two tops each in 5th and 6th respectively. 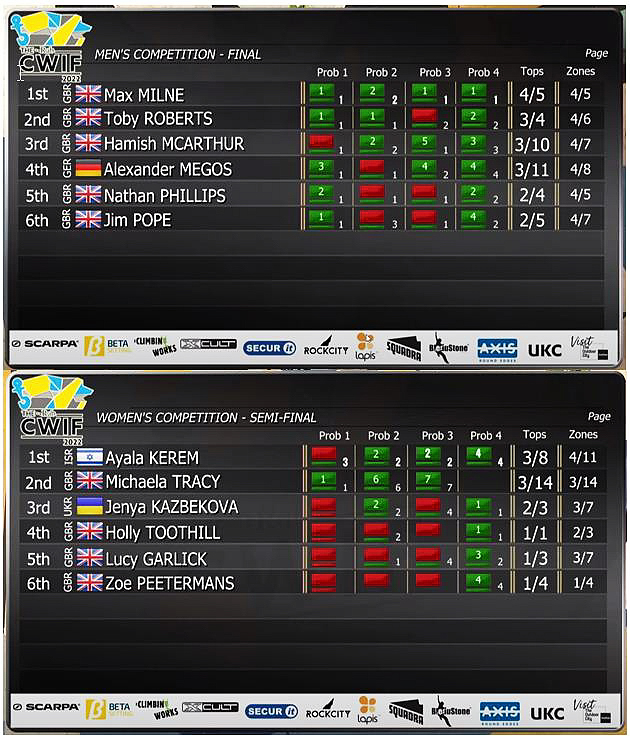 In the women’s field Michaela Tracy held a commanding lead over Ayala Kerem and Jenya Kazbekova by the halfway point thanks to her two tops on W1 and W2. Impressively, Michaela’s opening gambit on W1 was little short of amazing given she not only got the only top but flashed it too! Sadly, Michaela dipped somewhat in the later stages of the competition and having taken numerous attempts to top W2 and W3 she was running on fumes by W4 and failed to collect the zone hold. Finishing much stronger the win went to Ayala Kerem who finished with three tops in eight attempts. Michaela Tracy finished second with three tops in 14 attempts and Jenya Kazbekova finished third with two tops in eight attempts. Holly Toothill, Lucy Garlick and Zoe Peetermans finished in 4th, 5th and 6th respectively with one top each.

Watch the live stream of the finals below…