As we reported previously, the 2020 Kendal Mountain Festival was an online event for the first time ever.

For 40 years, ‘Kendal’ has been a reliable date in the diary. A point towards the end of the year, just before we dive into winter, when we can all get together and brag about the summer, plus make plans for the future.

This year, however, everything changed as it became obvious that big gatherings just weren’t going to happen. As Clive Allen, co-director of the Festival says, “From the first lockdown, we knew there would need to be a digital element to the event. Up until mid-September we still planned a hybrid, mixing digital with a socially-distanced physical event. But then the ‘rule of 6’ was announced and made it clear that it was time to think again. We want Kendal to excite and inspire in the same way that it has for 40 years, but bringing people together on the ground this particular year became impossible.”

Before we give you the category winners Clive Allen takes us ‘behind the scenes’ for the festival.

Nope - we were effectively creating an entirely new event. We were determined that it would still involve as many people as possible live on stage, otherwise it would look like some kind of endless Zoom call. However, it needed a complete change in headspace because we’re used to delivering a physical event, and suddenly we became broadcasters. And working in a fully Covid-compliant environment, which obviously adds complexity. First, we needed to find a digital platform which had to be able to reliably deliver film, live events, recorded content, a virtual Basecamp, brand support for our partners, social integration, ticketing… without costing a fortune. Then we had to create a pathway to reach that point which involved three seamless website changeovers. Then there was the actual production; creating a studio with 4 x cameras, tech team to match, producers, directors, etc. A tech task actually more complex than setting up the physical venues we usually work in.

Weren’t you tempted to make it much smaller?

Not really, we were determined to reproduce Kendal in full. We produced the 12 big ’sessions’ we usually have - bike, run, underground, swim, etc - and live-streamed these. Plus we had several one-off lectures - Simon Reeve, Aldo Kane and Jason Fox, Ray Mears, the Brownlee brothers for example - and our Literature Festival was bigger than ever, with over 30 events. A major difference was film - we could curate a much wider film programme as we weren’t constrained by venues - plus of course events don’t sell out, and everything became available on catch-up until the end of the year.

Did you attempt to replace the social aspects of the physical festival?

In as many ways as we could. The Adidas Terrex virtual 10k run, which people could take part in wherever their location, was a huge success with nearly 1,500 runners. And the Montane Secret Sessions were run on Zoom where people could all see each other on-screen and put questions to the star guests.

So, what would you recommend climbers catch before it all disappears?

Lots of stuff - there’s the Patagonia Rock Session with Niall Grimes, Emma Twyford, Pete Whittaker, Abbie Robinson and Robbie Phillips. The Mammut Mountaineering Session featured Stephan Siegrist and Maddy Cope, plus a fascinating section on the effect of climate change and its impact on routes and climbers. Leo Houlding and team did a brilliant show about their Roraima ascent. And there was Tom Randall and Will Birkett in conversation with Rob Greenwood on their Classic Rock Round rivalry. Jesse and Molly Dufton actually appeared twice to talk about Jesse’s blind ascents. Plus there are loads of amazing climbing films of course! 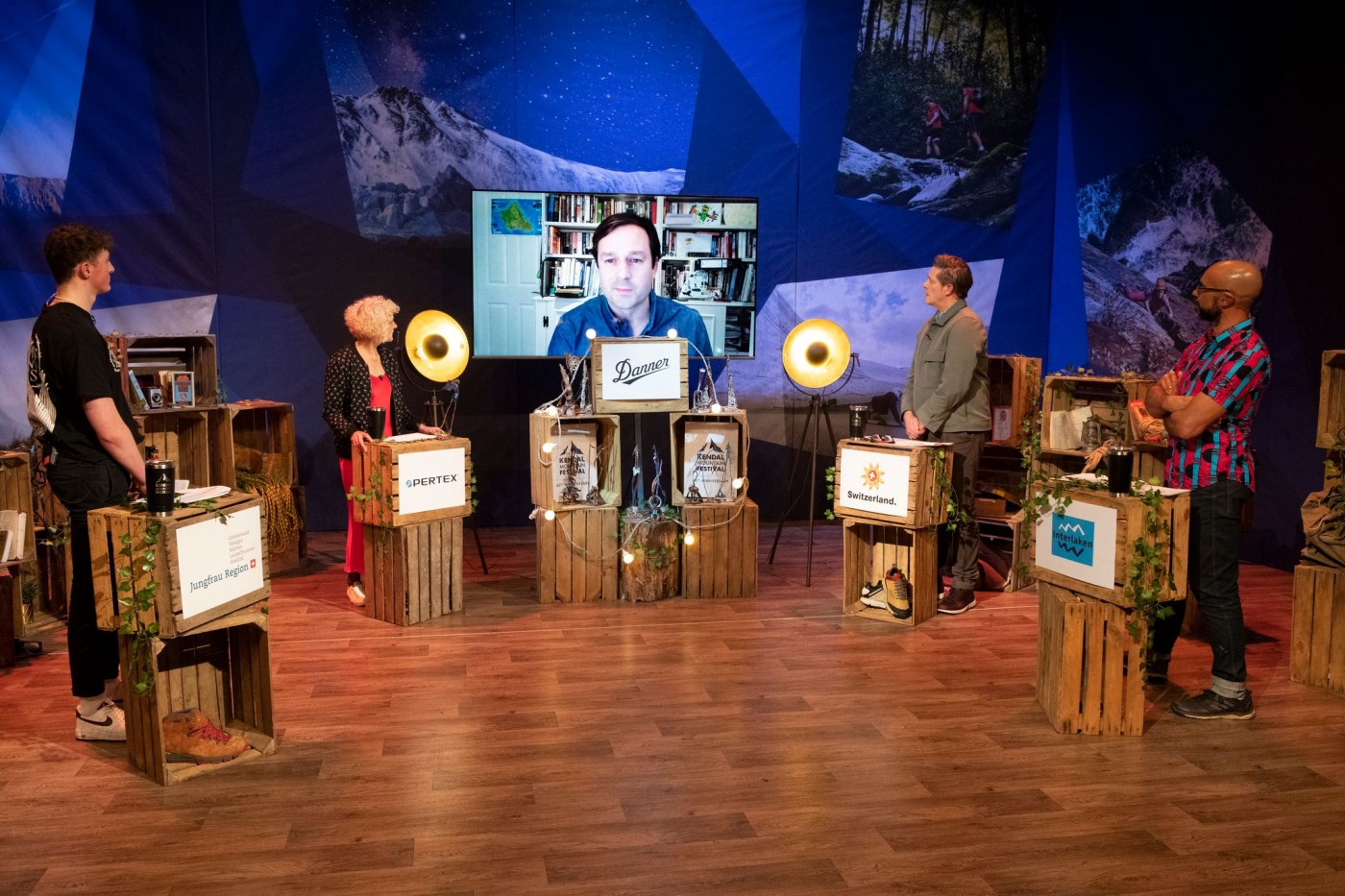 This year’s film prizes were as follows:

Best Creative: Then Comes The Evening by Maja Novaković

Depicting the lives of two grandmothers living in eastern Bosnia, the film emphasises the power of cultural heritage, through the presentation of chants and rituals for taming adverse weather, hail, and storm

Best Short: Lock Down, Rock Up by Nico Hambleton

Jerome Mowat on the challenges he faced as a front-line paramedic during the pandemic, and how he used climbing as an escape.

Explores the different approaches to Scottish deer management taken by landowners and managers, and the reasons behind those differing approaches.

Best Adventure and Exploration: Piano to Zanskar by Michal Sulima

Aided by a team of local Sherpas, as well as yaks and ponies, Desmond and his assistants are tested to the limits by the highest piano delivery in the world.

Best Mountain Film: The Ghosts Above by Taylor Rees and Renan Ozturk

A brutally honest look at the current state of affairs on Everest via the fraught relationship between indigenous guides and expeditioners, the rigours of high-Alpine mountaineering, and commercialisation of the mountain.

Guor Marial escaped war-torn Sudan to seek safety in the US. In his new life, Marial began running and qualified for the 2012 Olympics; ‘Runner’ depicts Marial’s difficult and triumphant journey from refugee to a world-renowned athlete.

Best Climbing Film: Loic and the Flolopapys by Dominique Snyers

Loic, Florian, Pablo and Pierre, are the inseparable ‘Flolopapys’, bringing their energy and good vibes to the farthest reaches of the climbing world; a band of brothers.

Karim, an amazing Rwandan roller skater, is hired to give skating lessons to children. In his lessons, he mixes children from all backgrounds and from his own Gakinjiro neighbourhood in Kigali.

The Venture Out Project, founded by Perry Cohen, brings LGBTQ folks together on wilderness trips. In his story, we get a glimpse into the healing qualities of nature and life-saving community bonds that are being forged.

In their quest to identify the pollinator of the ghost orchid, a team spent three summers standing waist-deep in alligator and snake laden water, swatting air blackened by mosquitoes, and climbing to nausea-inducing heights.

Judges Special Prize: Do Better Together by Shelma Jun

Grand Prize: Into the Storm by Adam Brown

Follows the unlikely dream of a young surfer from one of the toughest barrios in Latin America as he struggles to escape the deprivations of his background and become a professional athlete. It’s a story of hope and huge personal struggle against seemingly impossible odds.

The People’s Choice Prize will be awarded following the conclusion of the Festival and voting ends on 31 December.