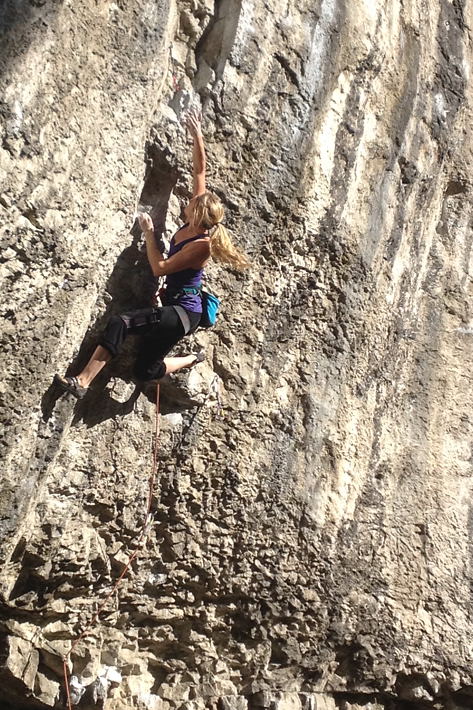 Katy Whittaker has just climbed Mecca (F8b+), one of the iconic 1980s sport routes at Raven Tor in the Peak District. Sending Mecca means that Katy is now the second British women to climb Mecca after Mina Leslie-Wujastyk whose ascent was in 2012. A total of five British women have now climbed F8b+ (or harder) including Lucy Creamer, Hazel Findlay, Mina Leslie-Wujastyk, Emma Twyford as well as Katy Whittaker.

Martin Atkinson’s first free ascent in 1988 of Mecca, or Mecca -The Mid-life Crisis to give it is proper route name, meant that Mecca was, for a few months, the hardest sport climb in the country. Famously, Atkinson completed Mecca immediately before he left the UK to work overseas. Since then, Mecca has become something of a rite of passage, especially for Peak-based sport climbers, many of whom see Mecca as a ‘must have’ tick. Like its immediate neighbours, Revelations (F8a+/b), Hubble (F8c+/9a), Make it Funky (F8c) and Evolution (F8c+), Mecca is a short route at around 12m. Unlike many Peak routes Mecca, however, hasn’t got any stopper hard moves on it, certainly not for an F8b+, which perhaps explains why it sees so much attention. However, to put Mecca into context it has yet to be on-sighted or even flashed despite attracting attention from world class climbers including the likes of Alex Megos whose own ascent earlier this year was done on his second go.

Katy’s ascent of Mecca is her second route of that grade following China Crisis at Oliana. Unlike China Crisis which is a 30m+ endurance fest, Mecca is totally different style of climbing and hence an entirely different proposition.

Keen for the low-down on how Katy’s ascent went, we threw some questions her way…

Stunning effort on redpointing Mecca – your second F8b+ after climbing China Crisis at Oliana. That's two completely different route styles so you must be feeling pretty chuffed with how you're climbing?

Yes, I am so pleased! Mecca is my anti style so I am really proud to have managed to fight my way up it. I never thought I would be able to climb a route like this, didn’t think it was my bag.

You've said in the past that you thought you were better on endurance routes so getting involved with and climbing Mecca is quite a change. Have you had to adapt your climbing much to do Mecca and has that involved any special training?

I think I am naturally suited to endurance routes due to my body type. Mecca was really hard for me, when I first started trying it I could barely string a few moves together. I didn’t train specifically for Mecca, I just trained on it. I tried to get on it twice a week, the rest of the time I just kept going with my usual training stuff.

You did China Crisis pretty quickly back in March. For the record, how long have you been trying Mecca and did the redpoint(ing) go well?

China Crisis took me about two weeks but I put in a load of work throughout the winter to make this possible. Mecca felt a lot more epic. I tried it properly when I got back from Spain in March for a few months, then got back on it in August. I repeatedly fell off the crux move session after session and it starts to get pretty boring when you don’t make progress. I have no idea how many sessions it took me – a lot!

It was a pretty foul day out in the Peak the day you redpointed Mecca and conditions at Raven Tor are well-known for being fickle. Have you been struggling to get good conditions and was it okay despite the clag over many of the Dales?

Yes, I have been trying it in some pretty grim conditions. September was so warm but I just pushed on anyway! So, even when it was claggy on Wednesday it was still about 10 deg colder than it has been, so it felt fine. I think I did it just in time though because the conditions seemed to get pretty terrible about half an hour later.

So what's next? More sport climbing in the UK or abroad, or is it time to get psyched ready for the winter grit season?

I am off to Spain for a week soon just to go and do some on-sighting and hang out with friends. Don’t have much planned for the rest of the year, just crossing my fingers for a good winter!

Thanks to Neil Mawson for the photograph of Katy climbing Mecca

Katy is sponsored by: Arc'teryx, DMM and Five Ten