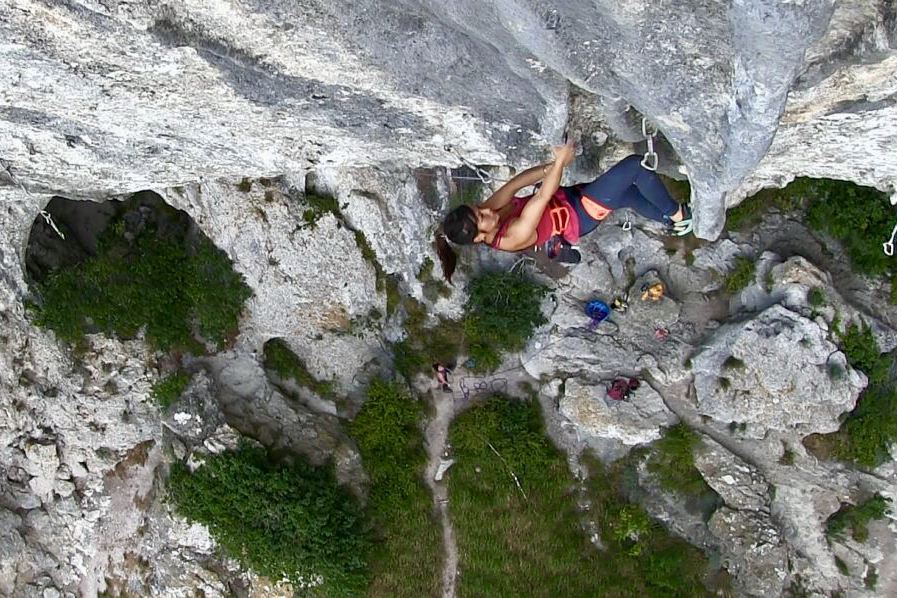 Like most climbers, Katherine often sets extending goals and this year it’s no different. Typically, Katherine splits her time between outdoor projects and World Cup competitions. Unfortunately the lead competitions didn’t go her way this year and as a result, she switched to outside goals. Before getting stuck into Switzerland’s multi-pitch classic 6.4 Sekunden (F8b/+), Katherine headed to the sun in the south of France for an ascent of Helix au pays des Merveilles (F8c+) at Pic Saint-Loup, France.

Here’s what Katherine had to say about her ascent of Helix au pays des Merveilles:

“Not having seen a ray of sunshine since this spring in Switzerland and a bit tired of freezing in Switzerland in the middle of July, the idea of enjoying the beautiful cliffs of the south of France motivated me right away. After the first two lead world cups which did not go well, I learned that I was not selected for the rest of the season. A bad thing for a good thing, the next day I was on the road to Le Pic St-Loup to meet some friends. Cédric Lachat had recommended me this crag which is not very frequented but which presents major routes, physically demanding in an impressive cave with tufas!

Helix is in the heart of this cave. A long and very overhanging route, with a difficult bouldery move at the bottom, followed by a resistant part with a second crux at the 3/4 of the route before finishing on incredible tufas (where you can still fall).

I liked the route right away, although at the beginning I was not strong enough to link the moves. It took me quite a while to figure out the first crux. Fortunately, I had Nina Caprez with me to help me find out the good beta for this crux and Pierre Délas for the rest of the route. The difficult section at the top was also a problem for me, not being able to use the usual beta with my T-Rex arms 😉

After falling on the last difficult move on the last day of my first stay, I had to come back in August for a few days to finish the route. With temperatures still around 30 degrees, I of course waited for the last day of my second stay to finally pass this second crux, fighting at every move and finally succeeding in the route thanks to a small saving wind. As always, the pressure of the last chance allowed me to give it my all!

About the grade, I heard that some climbers would downgrade it. I would say that it is a route of my style (endurance) but actually it took me a lot of attempts (around 12 days). Maybe my judgement is a bit biased by the heat or because I'm just not that strong ;-) Really hard to say but I'd say the rating seems pretty accurate. Note that I didn't use a knee pad, not being essential with my methods. In short, as usual, a discussion that is not so important for me in view of the beauty of the line, the pleasure of having done a great physical and mental fight and the great moments spent at the cliff with a great team! Thanks to them for the encouragement and the good times, it helps so much in a difficult project to have the chance to be surrounded by a great team.” 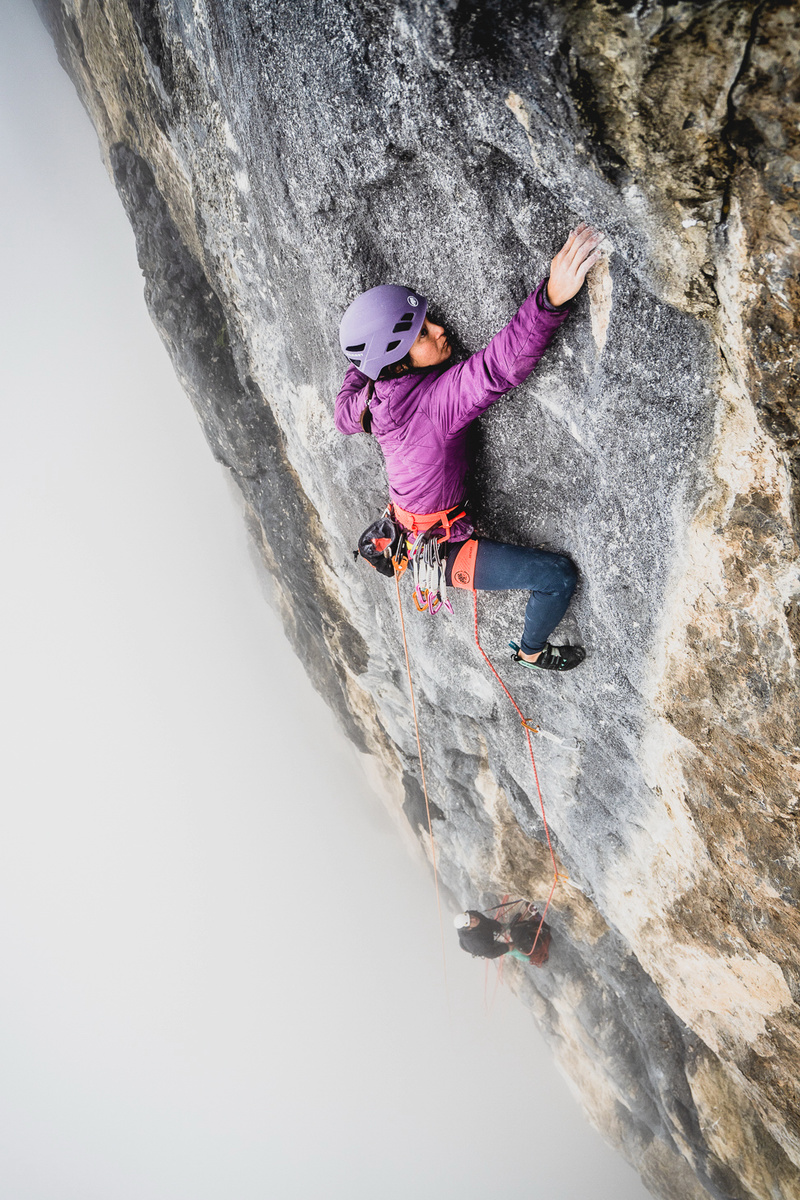 Next up for Katherine was 6.4 Sekunden (F8b/+). The first free ascent of this Swiss multi-pitch route was made by Matthias Trottmann back in 2006. David Firnenburg made the first repeat in 2019; Katherine’s ascent is the second ascent and the first by a women. Despite having sent numerous hard single pitch routes in the past, this route represented a different challenge for Katherine and hence new skills to learn. Here’s what Katherine has written about the trials and tribulations of her ascent of 6.4 Sekunden:

“After asking some friends for advice and information, I thought of this route, 6.4 Sekunden, one of the most difficult multi-pitch routes in Switzerland in terms of difficulty. It is located near Engelberg on the Fürenwand and consists of 7 pitches up to 8b/+ for a total length of 170 metres (6c, 8b/8b+, 8a+, 8a, 7c+, 7b).

The Fürenwand is about 700 metres long but the 6.4 Sekunden route is located on the last 170 metres of this face. We reach it by a cable car that takes us to the top before abseiling back to the beginning of the route. The type of climbing is rather varied, from crimps to slopers, overhanging, vertical and slab pitches. There’s also some long run-outs on lose rock sometimes that was very difficult to manage mentally at the beginning.

On 09.09.2021, I led all the pitches and climbed them in a day. The process due to the COVID-19  situation, all the world cups in the summer of 2020 had been cancelled. This left me completely free to focus on the rock climbing or the first time in my 15 years with the Swiss team.  After having done some difficult single pitch routes in the last years, I wanted to do and learn something new. Since about 2 years, I started to do more multi-pitch routes. The challenge for me is much more complex. I had to learn how to manage the physical and mental effort on all the pitches of the routes, the handling of the ropes as well as the fear of the high of course which uses a lot of energy. But what is particularly interesting in this form of climbing is the relation with your partner, I feel like you share much more with your partner that leave you amazing memories. The trust in one's partner must be complete in order to reach the top of the route together. The objective was for me to push my limits again in terms of difficulty but also in terms of the fact that climbing multi-pitch routes is a facet of climbing that I do not yet fully control and that challenges me in another way. The restrictions linked to the Corona restricting us from travelling and in a desire to discover and enjoy the Swiss rock climbing, it seemed obvious to me to look for a project close to home.

It took me a long time to climb this route, a total of 16 days and it was only around the 14th day that I started to feel comfortable and that I send one of the 7 pitches. The first day we started with my boyfriend Jim ­­­Zimmermann. The 2nd pitch, the most difficult on paper, moves seemed doable to us. But just after that on the 3rd pitch (8a+) we got totally stuck in the crux! Nothing to do, we will not see the rest of the route and we had to rappel down. Really disappointed and frustrated, I wanted to give up the project. Finally, re-motivated by Matthias Trottman who tells me that this is certainly one of the most difficult movement of the route, we tried again and rappelled down into the route directly with a static rope try the rest of the route. The pitches are vertical, technical, the movements seem to me too reachy for me and I was not able to climb more than a few movements in a row without a rest.  Not to mention the long run-outs sometimes on loose rocks that paralyzed me with fear!

Then, over the days, I manage each time to unlock a section or two, although some movements resist me again and again, especially in the 8a+. I finally found good beta for the 8a+ that gave me hope. Until the day I broke this famous hold. After trying for more than 20 minutes to find another solution without success for this section, I was close to giving up again. I go back anyway, supported by Jim, despite the rainy and foggy days that seem to get stuck especially between the Titlis and the Fürenwand and after a few weeks break, I rather feel like I have regressed on the route. Doubt is again settling in. All the rock is extremely humid and some passages are completely wet, which doesn't help to work the sections that still resist me. And then the sun came back. At the end of the 14th day of work, I finally climb one of the pitches, the 7c+, and I find again a new method in the 8a+! Everything seems possible again.

Thursday 09.09.2021, 5:30am I get up to leave for Engelberg with my friend Andy Winterleitner. However, the rain on the approach soaks us completely, and the rock seems humid again. I start on the 6c, continue directly on the 8b/+ with a lot of effort, aiming to reach at least the crux, a random dynamic move after a long and tiring overhang. And then, surprise, it goes through! The sending machine mode is launched, the stress and the pressure are creeping into my head. I clip the chains of the 8b/+! What a joy!  But I know that I still have an 8a+, two 8a, a 7c+ and an 7b to do, knowing that I have never managed to send most of these pitches. But considering the fight I had in the 8b/+, I might not be able to do it again soon. However, I go back down to the bottom of the 8b/+ to belay my friend Andy who would like to also try to send the route and then climb the 40 meters with the jumars again. Each pitch is a huge fight, I feel that I lose strength with each move. My head is taking over my arms which are screaming at me to let go. I know that if I want to have a chance, I have to get it all in on the first try.

The rain continues to fall and I am obsessed with the fear that the last few  pitches will become soaked and unclimbable. The pitches follow one another, the goal is getting closer and closer, meter by meter. I would like to rest more between each route but time is also short, the last cable car leaves at 6pm and the desire to walk back under the rain does not motivate me. And finally, I reached the top, completely exhausted but filled with happiness to have succeeded in this great challenge. This route, whose every length seemed impossible to me, which made me doubt and almost give up many times, will remain in my memory forever as one of my best performances that made me push my mental barriers and get out of my comfort zone again.”