Josh Ibbertson made the third ascent of Rainman at Malham in early June; his A-Levels exams now finished, Josh spills the beans. 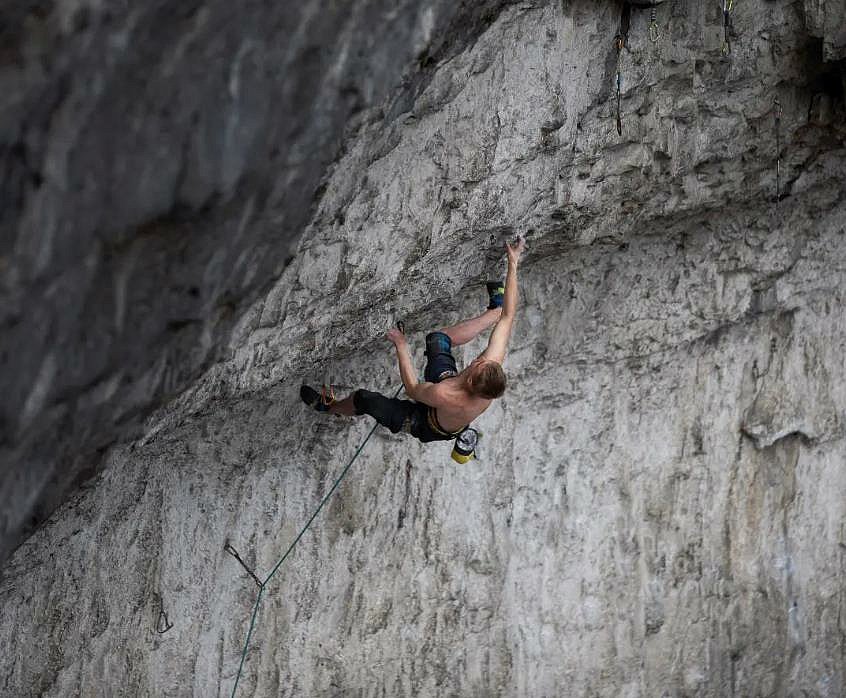 Josh’s third ascent of the Steve McClure test-piece not only puts him at the very cutting edge of sport climbing here in the UK but he’s also one of the younger stars in the redpoint game. As previously reported, Josh has - quite literally - catapulted through the grades at a phenomenal rate since doing his first F8a (Innuendo (F8a) at Raco de les Espadelles,  Margalef in Spain) when he was  aged ten in February 2015.

After an extended period in Europe climbing with his family, Josh returned to the UK where he’s been notching up some very impressive repeats. Having made what we believe to be the 11th ascent of Rainshadow (F9a) in December 2020 Josh went on in August of 2021 to make the 5th ascent of Northern Lights (F9a) at Kilnsey and then the third ascent of Bat Man (F9a/+) at Malham.

Steve McClure climbed Bat Man as a ‘training’ link-up; starting up Bat Route, Bat Man then finishes up the headwall of Rainman (F9b). Clearly, Josh had similar ideas and was keen all along to get involved with Rainman.  However, Rainman at F9b is a considerable step-up from Bat Man. With all the confidence of a climber twice his age Josh declared his hand and, throwing his rope bag down once again beneath Rainshadow, begun the process of joining the start of Rainshadow with the end of Batman. Alongside Josh was the UK-based Spanish climber Eder Lomba; he made the second ascent of Rainman. Josh then followed suit a month later.

Congrats on doing the third ascent of Rainman and finishing your A-levels; was Rainman the ‘stress-relief” from the A-Levels or was it the other way around?

Ha ha, I guess it was a bit of both! At least it gave me an excuse to take breaks from revision. As I was getting really close to sending, it did add a bit of extra pressure. However, I still really enjoyed being able to get out climbing. As soon as you pull onto the rock you forget about everything else and just focus on the climbing.

Let’s get into it then. Both you and Eder jumped onto Rainman F9b having done Bat Man (F9a/+). We’ll pick-up later on a grading discussion but for now let’s just focus on what your logic was behind that mahoosive jump in grade up to Rainman and F9b?

The jump did seem quite daunting at first, but it seemed like the next step after doing Rainshadow and Bat Man. There isn’t too much new climbing (3-4 moves and the Bat Route headwall) but obviously you’ve got to link the hardest bits of both routes whilst tired. Although I felt like I’d gained a lot of fitness last year from redpointing Bat Man there was still a long way to go to send Rainman. 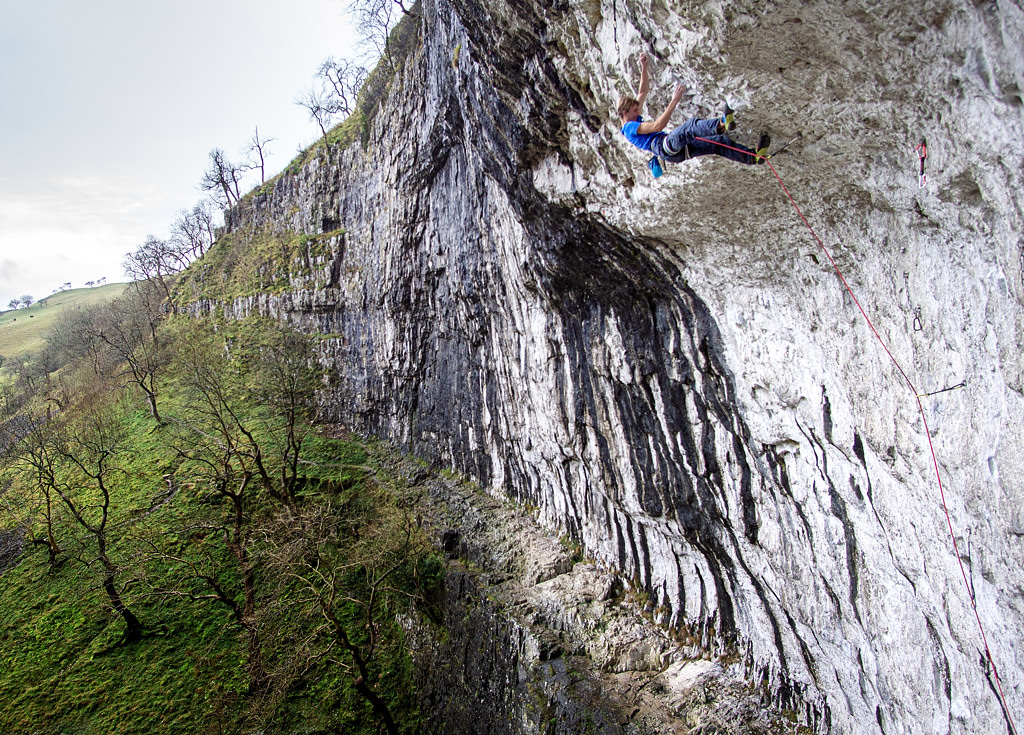 Although you’d done both Rainshadow and Bat Man how did it feel when first started on Rainman?

Because I’d done both routes, I was able to do the two individual sections pretty quickly again. Although I was able to get through the crux of Rainshadow, at first it was hard to make any good impact on the Bat Man headwall, I was falling off boxed lower than what was the redpoint crux of Bat Man (which you have to be pretty fresh to do).

How did you progress on Rainman and what supplementary training did you do?

Over the winter I did a lot of strength and conditioning-focused training as well as bouldering. Working with my Lattice coach Ella was a huge help. A lot of the weights stuff was new to me but it definitely helped me not just on Rainman but on my climbing and stability in general. Another key focus was on leg work for the kneebar. When I first tried the kneebar I wasn’t able to stay in it for even a second and by the end of autumn I was only able to stay for a few seconds so I knew I had to work on this over the winter. I did lots of leg work and in the end it meant that I could stay in for 25-30 seconds on redpoint.

At any point did you think you might have ‘bitten off more than you could chew’ as they say or that it might drag-on for a long time?

There were definitely times when I wasn’t making as much progress I would have liked. I got really high on the headwall in mid-April and though it would go any time. But things got in the way; I caught a nasty cold and my performance dropped which was really frustrating! It took quite a while to get back to peak form. It was sometimes in the back of my mind that this session could be the last good conditions of the year and that I’d run out of time this season which did add some extra pressure and I found it did uncharacteristically affect my nerves on the route. Usually when I’m climbing, I’m totally relaxed, but I did start to feel the nerves creep in on some redpoints.

It can be a double-edge when someone you’re working a route does it first; when Eder made the second ascent did that motivate you even more? How was it thereafter trying Rainman on your own?

If anything, it was more motivating when Eder did the route. We’d spent so much time on the route together I was made up for him when he did it. Getting the belay tick was also a plus, but also far more stressful than my own repoint!

Let’s drill down into some specific then. Eder got crazy good at kneebars on Rainman so much so that he spent 3:20 minutes in the kneebar at the end of the Rainshadow section of Rainman on his send go. Initially, Eder could only stay there for a fraction of that time and Steve ‘only’ used a kneescum for a quick shake there. How did the whole kneebar thing work for you? How was it on the send go and how critical was it for you to get as much back as possible there?

Like you say, Eder is a complete kneebar wizard and has some insanely strong legs. Legend has it that a video exists of him jumping over a car on roller skates! As a mortal I had to take a different approach, Eder could stay in the kneebar with one leg which allowed him to shake the other leg and swap them over. I spent a lot of time sat on the bolt trying all the possibilities. Although I made some progress, I couldn’t make his way work for me. I found that the best thing was to use both knees and hold the position for as long as my legs would allow me and then set off. It took some time to gauge how far I could push it before falling out which meant that I fell out of the kneebar a few times on redpoint which was frustrating! In the end I realised that trying to stay longer in the knee bar wasn’t really working for me, so I decided to just focus on getting fit enough to send it with a short rest. We timed my rests on redpoints and 27-28 seconds seemed optimal, long enough to shake out but not so long that my core and legs were shot for the upper section.

Next then let’s pick-up on your take on the section where Rainman goes into the top of Bat Route. Steve climbed this section direct whereas Eder used a slightly different beta and moved slightly left, then up and then back right which allowed him to get a shakeout. What was your method on this section and what was your thinking?

I climbed the last section the same way as Steve. I get the right-hand slot, left hand ear, get a high left drop knee, and roll over with my left to a slopy crimp. From there, you rock up right to a thin undercut, build your feet and roll over with your left again to join the holds on Bat Route.

What’s your thoughts on Rainman now you’ve done it; first with respect to quality and then the grade?

Rainman is for sure the King Line of the Cove taking in some of the best and hardest climbing straight up the centre of the crag. It’s such an incredible line and undoubtedly one of the best routes I’ve ever been on. For me, it’s the most inspiring route in the country.

It has quite varied climbing. The headwall differs in style compared to the burly nature of Rainshadow. It’s much more technical and on smaller holds with lots of deep drop knees and interesting body positions.

In terms of difficulty it’s my first F9b so I don’t have others to compare it to. But I can say it was a huge challenge for me, basically linking two of my hardest routes one after another in one mega pitch. It certainly feels a lot harder and took me a darn sight longer than any of the F9a’s I’ve done. Let’s face it Steve’s routes aren’t known for being soft!

And finally, what are your thoughts going forward. What’s your plans in the short term – ie what are you thinking of trying next? Longer term, where do you think you can take you climbing either in the UK or abroad?

I’m really looking forward to getting in lots of mileage after a proper siege. We’re heading to northern Spain in a couple of weeks where we’ll hopefully get some surfing in and Eder is going to show us round some of his local crags. In the longer term, I’d like to mix up climbing abroad with climbing in the UK, there are still plenty of great hard routes around Yorkshire and hopefully some new ones too!