Jim’s been adding steadily to his tally of hard routes having done Revelations at Raven Tor recently. However, with his ascent of Mecca he has clearly got his eyes set on harder and longer routes. In total Jim had just three days on Mecca – two last weekend  and yesterday – so he’s not only the youngest climber to do Mecca he’s also done one of the quicker ascents. 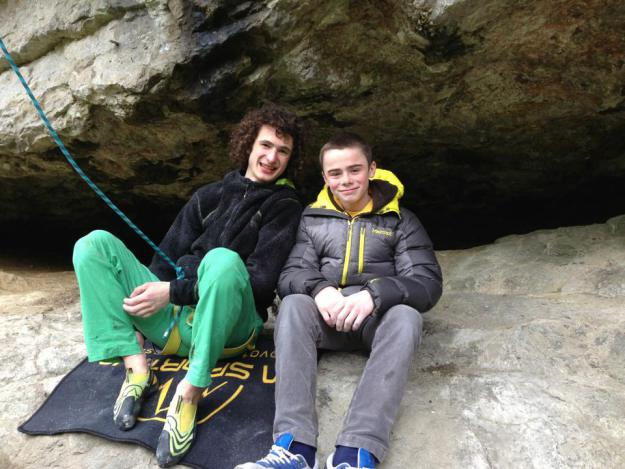 Adam Ondra and Jim Pope beneath Raven Tor earlier in the year as part of Lyon Outdoor's event.

As usual for a weekend, Raven Tor was quite busy yesterday and word has filtered back from the cognoscenti that Jim’s ascent was pretty impressive. To see what Jim’s been up to behind the doors of the youth team we went to Team Manager, Ian Dunn for the low down on Jim’s activities and progress: “Jim joined the team as one of the smallest members but he has grown a bit both in height (not that much) and in muscle bulk in the last year. He is a very talented climber but he also works very hard too and his regular coaches at the Castle certainly keep him focused and on track. He is always psyched to climb and train and has boundless energy as well as a wicked sense of humour. He is a great character to have on the team and his results in the BLCCs were outstanding: first in youth A boys and 4th in the Seniors at 15 years old.

Clearly Jim is a name to watch out for going forward. The video below shows Jim’s successful redpoint. youtube.com/watch?v=KviFxMra6tg …

Jim is sponsored by Liquid Grip, Lyon Outdoor and Marmot.