Climbing with Calum Muskett (21yrs), Jerry Gore (54yrs) successfully summitted The Eiger yesterday as his 2015 Insulin Challenge – to attempt a speed record for a roped-party on the North Face. 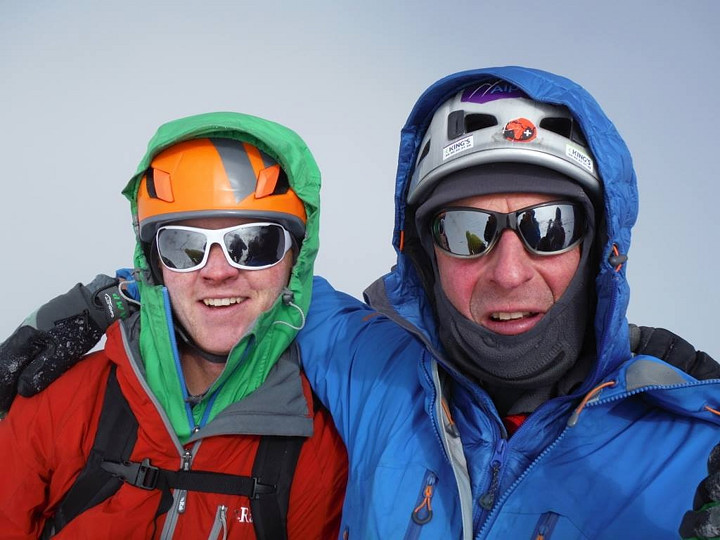 Every year Jerry Gore undertakes a challenge to raise money for the organisation, Insulin For Life. One of his previous challenges was the FA in 2013 of The SE Face of The South Tower of Paine nicknamed “The Wall of Paine” in Patagonia. Jerry, one of the UK’s leading expedition climbers over a 30 year career, and owner/operator for AlpBase.com, was diagnosed Type 1 insulin dependent in 2001. He’s a passionate and committed supporter of Insulin for Life - a NFP organisation that collects and distributes insulin to children in emerging countries who would otherwise have no hope of survival.

Jerry announced his 2015 challenge back in mid-March and ever since then he’s been posting regular updates on his training. Jerry chose BMC Ambassador Calum Muskett to partner him for the Eiger climb. Their aim was to beat the then current fastest recorded time (6 hours 10 minutes) for a party ascent which was set in 2008 by Daniel Arnold and Stephan Ruoss. As of April 8th this year, the Eiger North Face Paired Team Speed Record was broken by Roger Schaeli and Simon Gietl in a time of 4h25min beating an earlier new record set in March by the German team of Michi Wohlleben and Fritz Miller who came in with a climbing time of 5hr 10minutes. 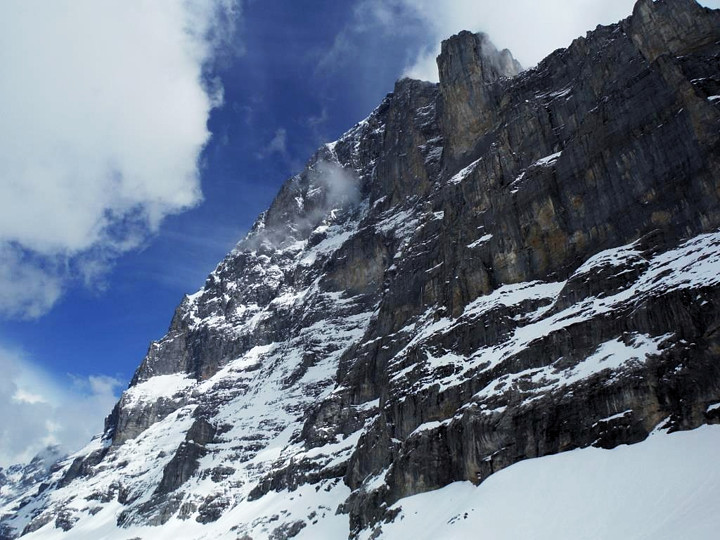 The North Face of the Eiger. Photo Jerry Gore

Jerry was clearly under no illusions that this was going to be a tough challenge. Writing on his FB page Jerry said; “To get fit for this challenge, and to give myself any chance of keeping up with Calum (he is 21 and a member of the Welsh National Fell Running Team, as well as an elite pro alpinist) I am having to do alternate days of 1000m speed ascents carrying 14Kg rucksacks, with 4 hour weight sessions or stamina trg [training] at indoor climbing walls. The trg is taking its toll on my arthritic knees, diabetic control and dodgy elbows. But the cause is so important." 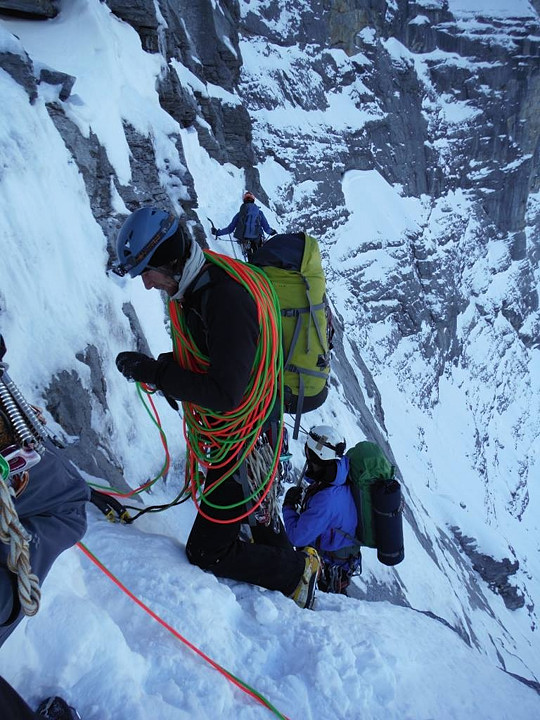 Traffic jam at The Difficult Crack on The North Face of The Eiger. Photo Jerry Gore

Earlier in March Jerry completed a new route as part of his training – the South Ridge of La Blanche – which included 1915m of ascent which Jerry and his partner, Dave Tilly, did in 7hrs, 52mins. Finally, and after getting supporting messages from Bear Grylls and Ueli Steck, Jerry and Calum set off on their challenge on April 21st. It didn’t go well however as Jerry posted; “Disaster! Calum and I were making really good time but then arrived at the Difficult Crack only to find five teams in place or waiting for a really slow group. After two hours of waiting with clearly no chance of overtaking all those by now angry teams we decided to descend and have a crack tomorrow. So gutted and so tiring but no choice. One of the slow teams was helo'd off later on. Oh well early start tomorrow. Fingers crossed. Thursday the bad weather arrives so we will have to get off tomorrow whatever.” 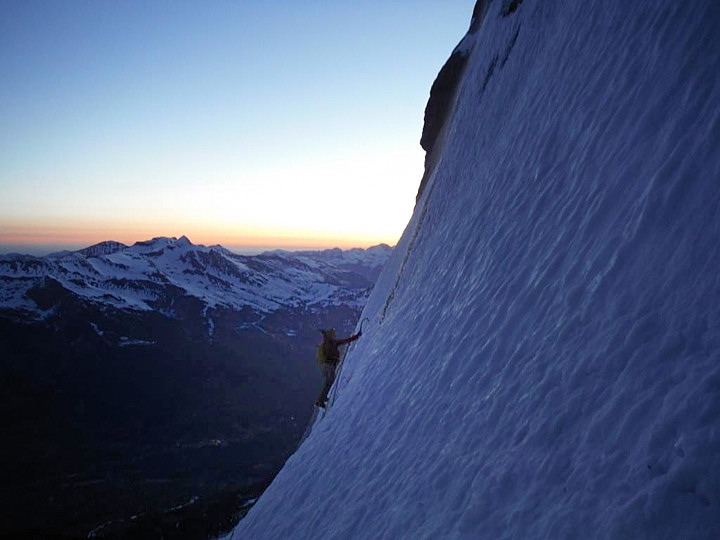 Jerry’s next post however, broke the news that everyone had been waiting for; “Success! We climbed the Eiger North Face in a day! And lived! Despite an early start we still had to wait at the Difficult Crack for teams above us. And we found conditions on The Ramp very lean - proper technical mixed climbing. Despite a massive hypo on our first attempt my blood sugar control was pretty good - between 3.2mmols and 10.3 mmols.

Off to bed now as shattered - 3,500m. of climbing, 1000km of fast driving and very little sleep over last 4 days. Will post again tomorrow.” 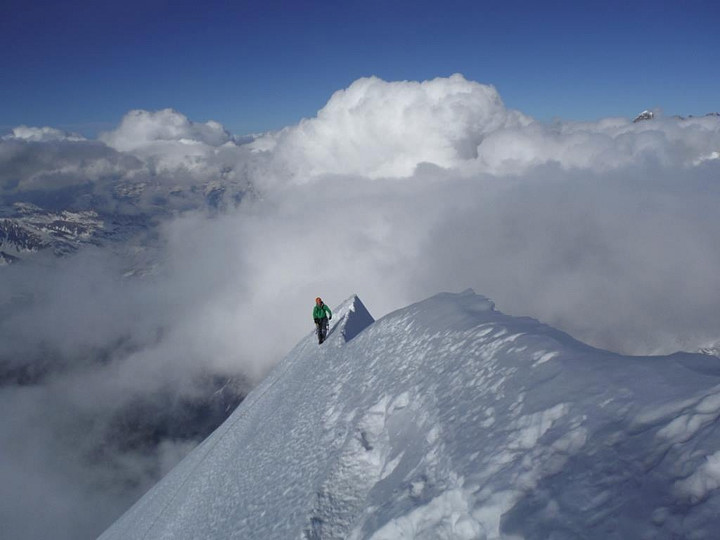 Calum Muskett on the summit ridge of The Eiger. Photo Jerry Gore

So a fantastic effort on Jerry and Calum’s part – although we still don’t know what their time was! We’ll try and bring more info ASAP.

In the meanwhile this is what Jerry has said about IFL and how to donate; “Together with Insulin For Life we have set up The Philippines Project, the aim of which is to send donated insulin and diabetes supplies to the Cebu region in the southern part of the country, for use by children who desperately need insulin just to stay alive. During my visit to the Philippines last year I came face to face with the grim reality of impoverished families struggling daily to obtain insulin for their dying children. Without the IFL supplies they have no chance of obtaining this miracle medicine. And without insulin they have no hope. “

In order to donate click through this link:  http://www.insulinforlife.org/help