As we reported previously, James Pearson recently did the first ascent of Bonanno Pisano, a mega line at Wolfberg, Southern Cederberg.

James Pearson on the headwall of Bonanno Pisano

Firstly, though, lets run-over some of the basics. Wolfberg is in the Western Cape area of South Africa. Located about 200 kms or so north of Cape Town and about 50 kms south of the bouldering mecca that is the Rocklands, Wolfberg is in the Cedarberg Mountain Catchment Area. Wolfberg has superb quality single and multi-pitch trad climbing on hard sandstone. Access to the climbing area involves a lengthy drive down a dirt road and then an hour or so walk-in from the camp-site. James gives a little more detail in the short Q&A below.

The line of Bonanno Pisano at Wolfberg

As we reported previously, James was tipped off about the route by a local, Richard Halsey. It’s clear that it took considerable effort on James's part but he’s pretty pleased with the result; “It's one of the best new routes I have ever done, and I feel so very lucky to have found it”.

Here then, is the low-down from James:

Congratulations on another amazing-sounding/looking route. Firstly, can you tell us what you mean when you say that it blurs the distinction between trad and sport?

Thanks a lot, I was really happy to get this one done, it was a big investment of time and energy.  Before heading out to South Africa I had in my mind the idea of looking for a new hard trad route, but was pretty sure I was not looking for something dangerous.  The days of ground fall grit routes are over, and now I much prefer to push myself on harder, safer challenges.  Caro and I spend most of our time sport climbing, which to me is really the bread and butter.  I wanted to look for a physically hard route that was ultimately safe, a bit like Rhapsody.  Big run outs are ok, as long as the fall out zone is big enough, in fact, they are often an advantage - you can stop worrying about fiddling in gear and just go climbing!

So, next can you tell us about the nature of the climbing and the DNA of the route?

Bonanno Pisano is a lot more involved than most other trad first ascents I have done.  For a start it’s almost 50 meters high, and then it overhangs by at least 20m!  It’s really an incredible piece of rock, like a giant inverted staircase, and it’s that feature that makes the climbing on the route so varied.  One minute you are climbing through a steep face on good edges, the next you are balancing precariously on smears, then pulling on fingernail crimps.  Resting on juggy breaks, or finger jamming through a horizontal roof crack - it really has everything, and that’s one of the reasons I found it so hard.  It’s tough to switch on the fly from one style to the next - slab climbing and crack climbing demand totally different approaches and types of concentration.

You say that there is an 8m runout on the headwall ‘for good measure’. Sounds very exciting; what the reason for that and/or is there an historical precedent that you were sticking too?

The reason is simple, there is no gear!  Once you turn the final lip, the rock becomes much more compact, or more precisely, the breaks become further apart.  There are just enough small holds to make it possible, and you are really pumped by the time you get here.  It’s a case of trying to keep your cool, and recover as well as you can in the last rest.   The moves are awkward and the holds are sloppy.  It’s not crazy hard in isolation, but it’s really easy to fall off, and with the pressure of “wasting” the previous 40 meters of effort, those holds feel all the more slippery!

How significant was the ‘head’ element of the route?

The route was a real mental battle, but not for the usual trad reasons of danger or death!  The route is so steep you could fall of the thing all day, but it’s simply such a pain to clean all the gear after an unsuccessful attempt, that you really put on the pressure to not fall off.  Cleaning the route meant jumaring and abseiling 3 different times to get the various bits of kit.  Realistically you could try the route once, perhaps twice in a day.  When you are on a short trip like this, every day counts!

I know better than most how it’s easy to get carried away with these things!  Bonanno Pisano felt pretty hard, but it’s probably not.  It’s probably about F8b (expo) / 5.13d R / E9 6c  It felt a touch harder and bolder than the other existing routes trad routes I climbed on Table Mountain but this could just be the effect of the unknown. 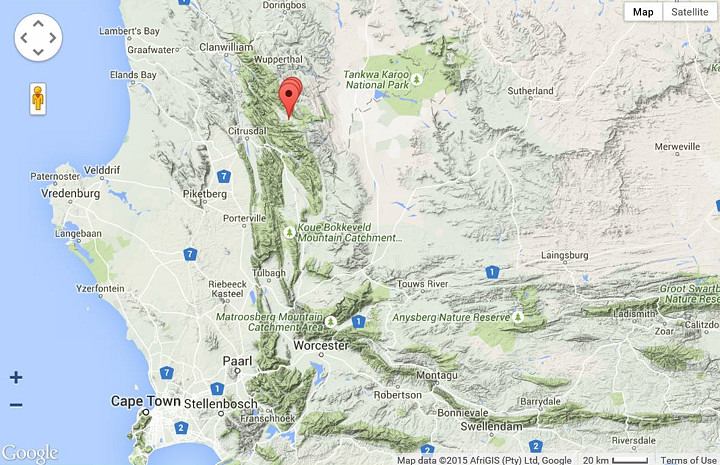 Climbing at Wolfberg sound amazing. Can you tell us a little about the climbing there, the situation, the rock and the type of climbing there?

Wolfberg is an awesome 150m high band of bullet hard orange sandstone in the south of the Cederberg.  Its home to a load of moderate multi-pitch trad routes, like the super classic Energy Crisis, but there is still a lot of scope for harder development. It’s a steep hour’s hike from the camping/accommodation in the valley below, but the track is really good.  The cliff faces south, which means it’s in the shade almost all the day, and sitting at around 1600m above sea level, it can get quite chilly during the winter months!  Go there in spring/summer or take a good jacket!

Finally, where’s your next target/trip going to take you too – maybe back to the UK to have a look at more hard trad in places like Pembroke?

No big trips for a while.  We’re staying at home, trying to get fit again, and preparing for an upcoming road trip around France with Yuji Hirayama in September.  I’d love to come back to Pembroke this year, as I’ve so many little projects still to try, but realistically we’re not going to have the time.