James Pearson recently added a sit-start to Juneru at Albarracín; it’s his first Font 8C and it is now the hardest bloc at the Spanish bouldering venue. 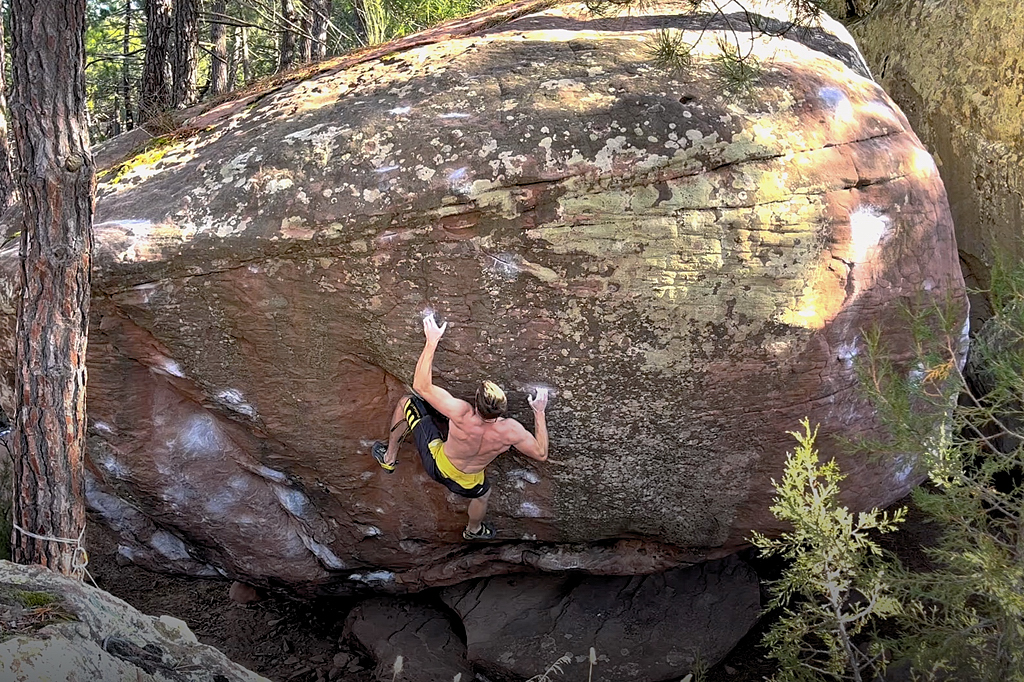 James Pearson, along with his wife Caroline Cialvaldini and two young kids, recently travelled to the Spanish bouldering mecca of Albarracín.  After a winter of training, James was keen to get stuck into something hard. On the last go of the last day, James managed, despite being exhausted, to pull the first ascent of Juneru Sit out of the bottom of the bag.

James told Climber just how hard he had to try and what his first ascent means to him: “I don’t think I’ve ever tried so hard on a boulder problem and was sure I was going to fall on each and every move, somehow sticking it and moving onto the next. When I got to the knee-bar, it felt so bad that I didn’t even worry about trying to place myself well, instead just throwing for the next hold, totally lost in the moment. When I caught it and realised everything had stuck, I was suddenly transported back to the here and now, instantly aware of what I’d just done, but also how exhausted I was. The next 3 moves, normally much easier than the rest, have never felt so hard, but there was no way I was falling off or at least giving up without the fight of my life. I dragged myself over the top and just stood there looking down at the pads smiling. This one meant a lot!”

James explained how his efforts had unfolded. Having sent the existing stand-up version of Juneru – itself graded Font 8C – fairly quickly it seems that the sitter wouldn’t be that much extra but that was far from the truth. Also, and as is often the case when travelling – especially with kids – the pressure was on to get the job done:“Despite climbing the stand start relatively quickly, and the first two moves of the sit not adding any “real" difficulty, I struggled like hell to link it all together again and success came right down to the wire, really about as close as you could get! I don’t know how many times I fell on the crux move from the sit but it must have been well into double digits. Juneru is a collection of powerful yet subtle moves, from the way you place your fingers and turn your hand on the first crimp, the left heel hook who’s secret to success is still a bit of a mystery, and all the way through to the knee-bar that just never seems to fit.

Trying the same problem day in and day out takes its toll on you mentally and physically. It's a fine balance between learning the subtleties of each move and so appearing to get stronger, but actually getting tired and weaker on the moves through over repetition. By the end of our trip I felt like I knew Juneru inside and out, I could remember how the moves should feel on a good day with fresh skin and a good breeze, but all I had to offer was bruised tips, skinned knuckles and aching muscles.

In a past life I’d have extended our trip, taken a week off and then come back again, probably only to fail through some form of performance anxiety. Nowadays, with Arthur going back to school and a whole family to think about, I don’t have the luxury of almost endless time. We get to climb when family circumstances allow us to climb, and we make the most of that. I've learnt to pus myself way harder than I thought I ever could, but I’ve also learnt to make peace with the fact that I might fail. Those two things together seem to be the key!” 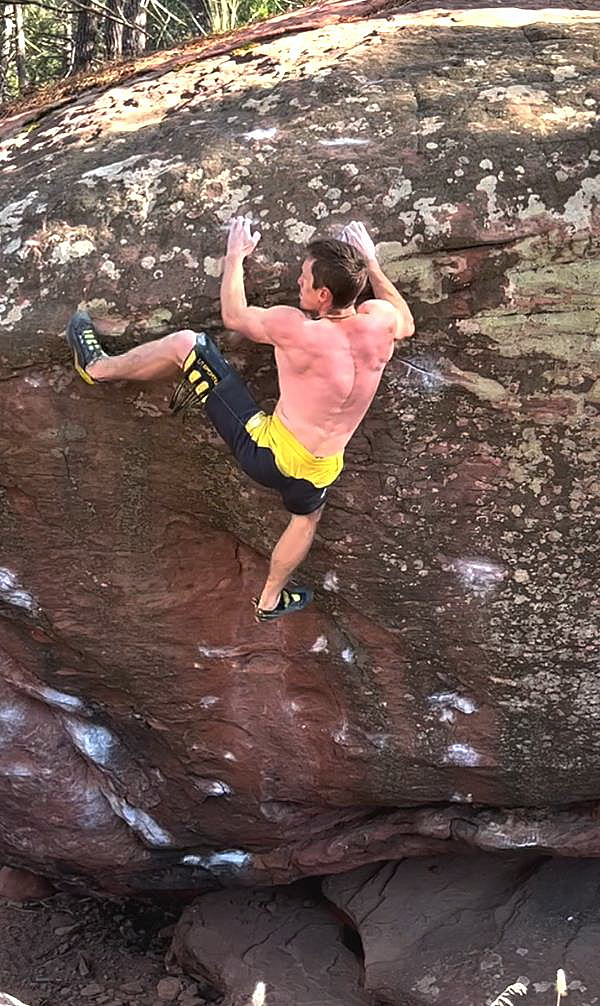 So, digging pretty deep on the last day, James managed to get the job done – somehow: “On the day I climbed Juneru Sit, I warmed up in my usual way and began to try the moves. I wanted to try the knee-bar in isolation yet again, to see if today was the day I might finally unlock the enigma, but I couldn’t even pull onto the crux from my ladder, my left middle fingers refusing to take the punishment of the tiny undercling pocket. I began to try the first moves in the hope that I’d find some forgotten courage, but slipped off early on… things were not looking good!

A few tries later I fought desperately and made it to the knee-bar, I really wanted it and knew time was running out, so took extra care to work on my body position to give me every chance. The knee-bar stuck and I lifted my left hand, it was working, I was doing it, then boom, I hit the crash pads! My knuckles covered in blood, what once was my skin shining red and white still hanging on the first crimp.

I tried a few more times but felt empty and burnt out. When I fell on the first move, not even able to arm the first crimp, I decided that enough was enough, packed up my things, and started to walk back down to the van. I remembered the climbing heroes from the movies of my youth, people like Chris Sharma always sent their project on the last day, last try, when things were looking bleak. It had never worked for me before, but for some reason on this day I decided to go back for one final try.”

James and Caro are joint Climber Magazine columnists; follow their climbing via their column in Climber and online here at OnceUponAClimb