Jacopo Larcher just returned from Valle dell’Orco, Italy where he checked out some new trad lines then made the first ascents of two hard projects; Blood Diamond and Shikantaza. 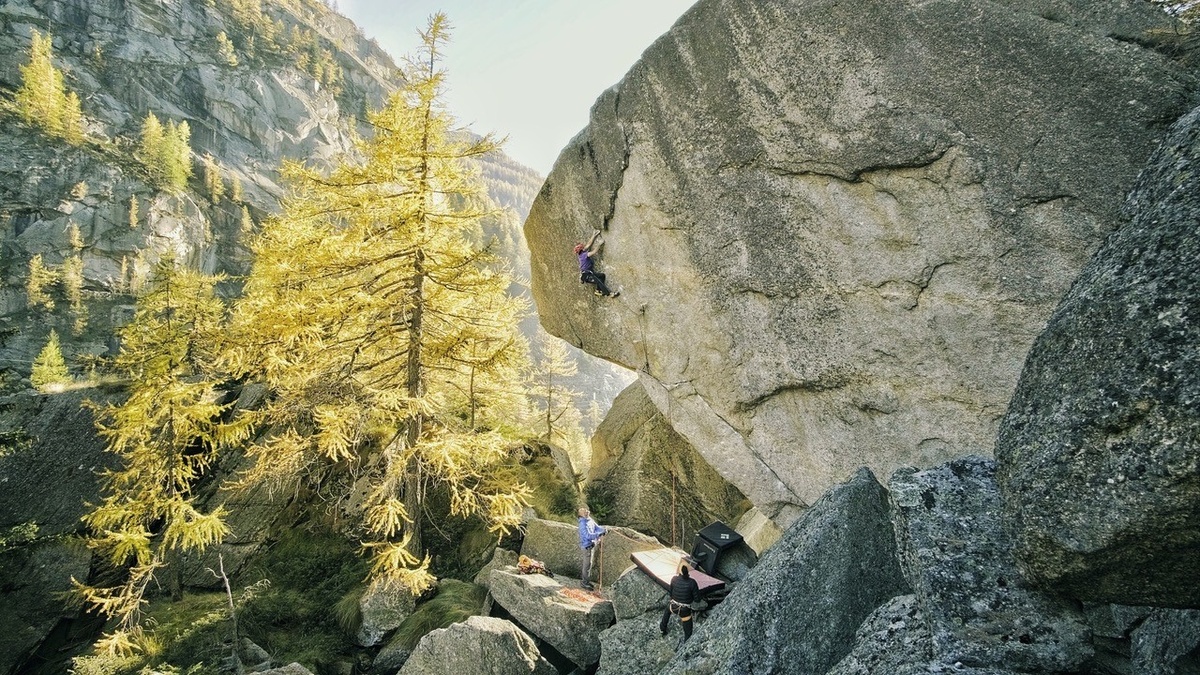 Jacopo reports on how the trip came about and the two new routes he climbed:

"After a busy route setting period there is nothing like 2 weeks of van life and granite climbing in a valley full of climbs and potential for new ones! The second week of October I drove to Valle dell’Orco to attend the La Sportiva athlete summit, with the idea of spending some more days there after the event. At the end of the meeting everyone left the valley, but the weather forecast looked too perfect for leaving too and, after our expedition to Pakistan, I was really looking forward to do some trad climbing. During the meeting we got a little topo with some interesting new and old projects, so I immediately went to check them out!

Babsi had to go home as she had some work to do, so I remained with Olli (our dog) and I climbed mostly on my own or with the locals Andrea and Simone, who warmly welcomed me to camp at their place ad really made me feel home (thanks again!).

I started working on two cool, but completely different lines. The first one was an old project of Adriano Trombetta, a short and very “British” route, the second one a steep and powerful crack located in a crag freshly developed by Andrea, Simone and Marzio (Nardi). I particularly liked the fact that the routes were very different and required completely different skills. One was definitely not as hard technically, but quite dangerous and with a potential ground fall from about 10 meters; the other was safe but technically way harder. I liked how both routes required a similar amount of work, but yet a different approach. On one I had to understand how to climb it and try hard for sending it, while I had to often practice and top rope the other one in order to be sure to avoid to fall to the ground while eventually leading it: the beauty and variety of trad climbing!

On the 24th of October, after a few days spent brushing and figuring out the moves and the gear, I managed to make the FA of the Blood Diamond, a steep and powerful crack situated at the Diamante (Diamond) crag. The gear on this one is always good, but placing it on lead definitely adds a little extra to the crux. The moves are simply amazing! Poor footholds, big lock offs and compression climbing on top… a real gem! Personally I think this is the hardest one I’ve done in Orco so far.

The following day was the turn of the other project. As I mentioned before, Adriano Trombetta discovered the line years ago and had the vision of tying to climb it without bolting it. Adriano was a real pioneer in Orco (and not only!), where he established a lot of routes and had a lot of projects; he tragically passed away in 2017 caught in an avalanche, but his spirit still lives in the valley and in the memories of his friends!

The route is located on a big boulder at the base of Sergent; it starts following a sloper rail on a prow until a good flake, where you place some micro cams before setting off for the crux section. After a few moves you reach a good crimp, on which I decided to place a cliff as protection; the placement looks good, but the hold is a loose flake, which would probably break in case of a big fall on it. I tensioned (on lead) the hook with a piece of cord to a lower cam for avoiding it to move. The next section involves some technical moves and small crimps and ends with some insecure moves to a big flake, where you can finally place some more gear before the easier top out. The climbing is definitely not so hard (8a-ish), but the combination of insecure moves and a possible ground fall make it spicy! I personally really liked the shape of the block and the line, that’s why I absolutely wanted to climb it; I couldn’t have wished for a better end of my trip to Orco! I’d never had the chance to meet Adriano, but this one is an obvious tribute to himself and his vision! I decided to call it Shikantaza (aka. The Tromba project)."