Aleksandra Miroslaw and Ludovico Fossali took the gold medals at the Speed World Championship at Hachioji over the weekend. 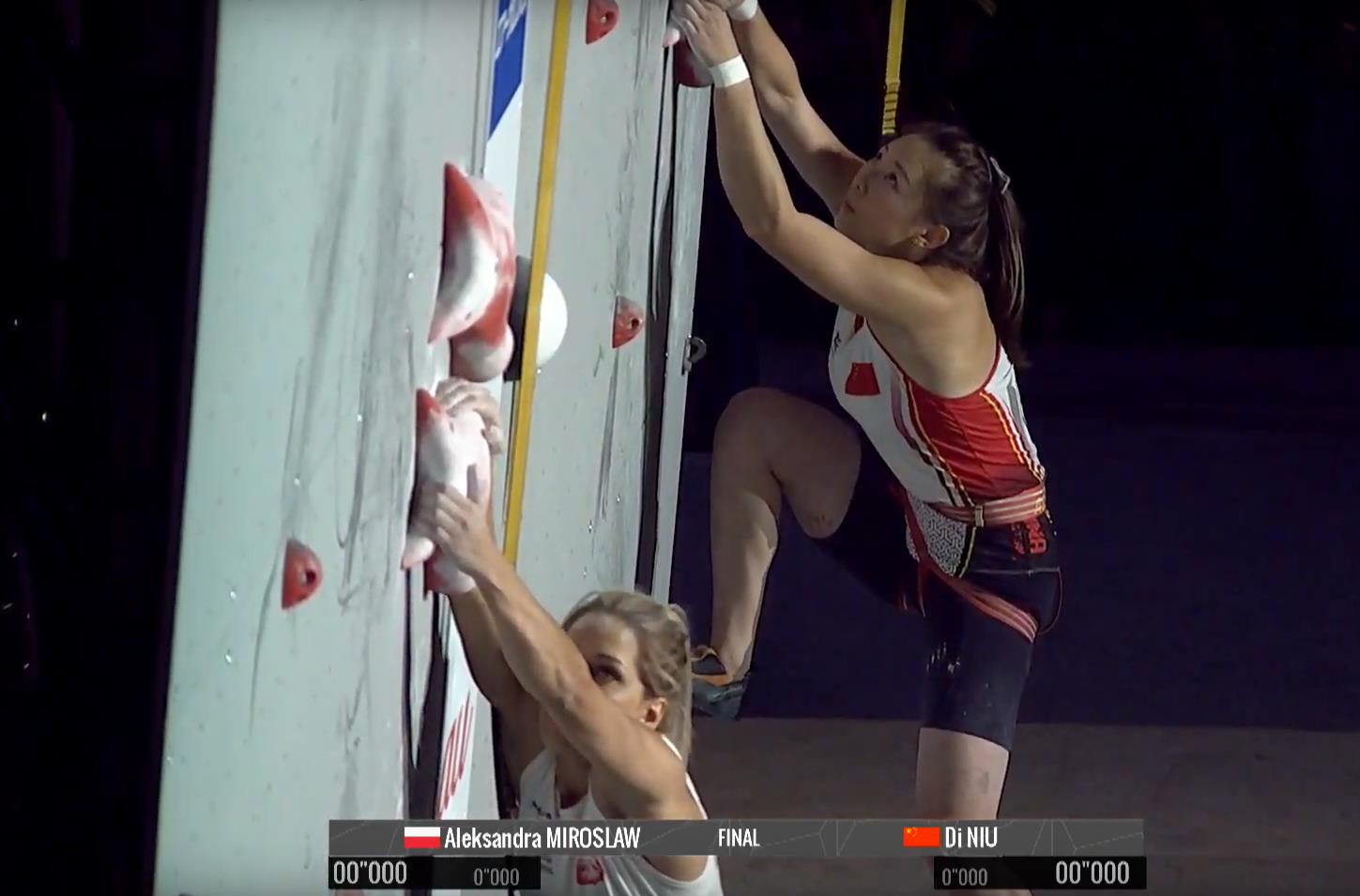 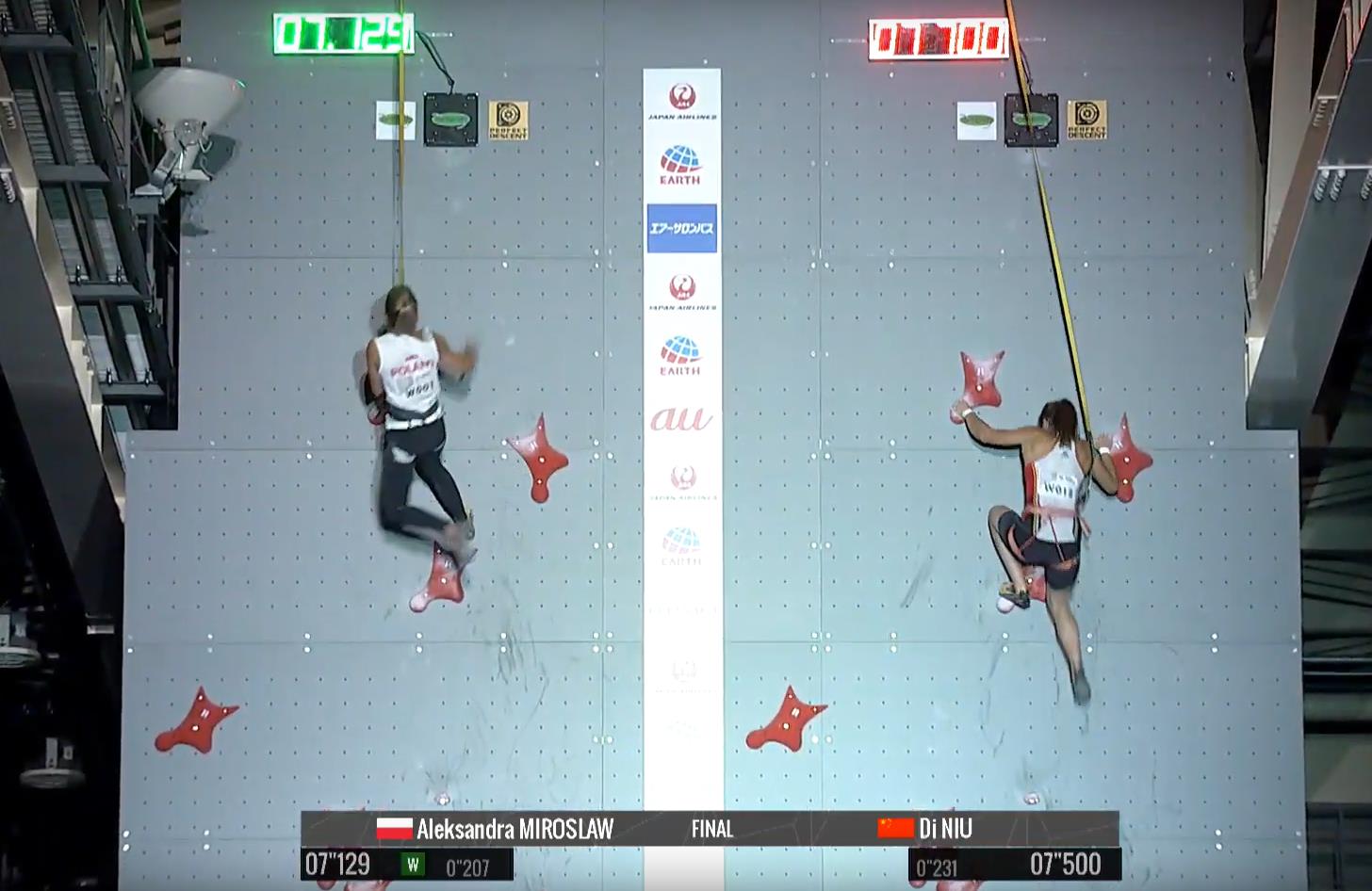 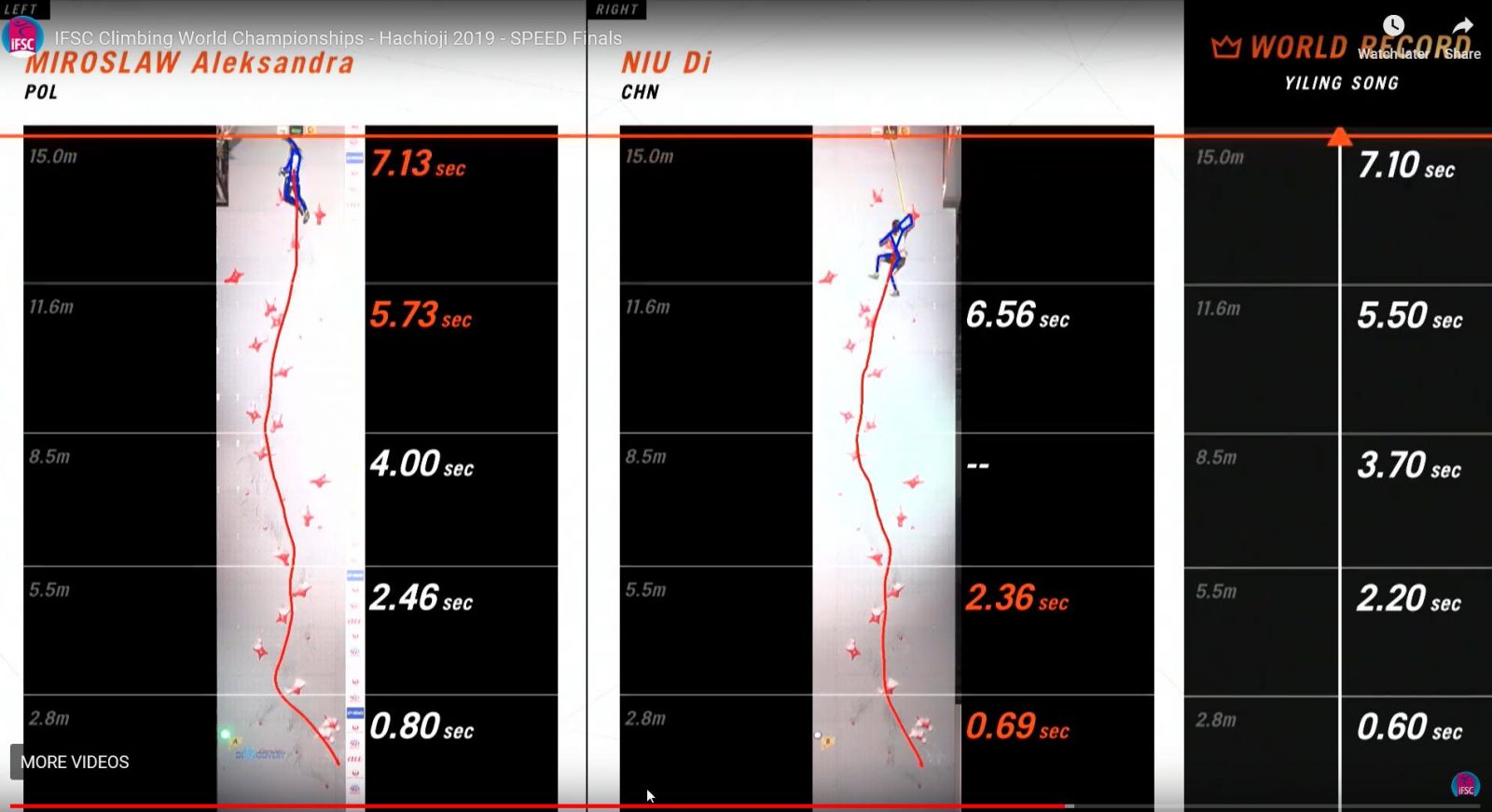 The Women’s finalists at the start, finish and the comparison with current World record runs

The third and final individual event at the Hachioji World Championships was held on Saturday with both the women and the men’s event being held in the day. Tension was higher than normal as not only was the Speed World Championship up for grabs but, crucially for Olympic hopefuls, so too were vital ranking places for the Combined World Championship hence considerable attention was on the lead and boulder specialists to see where they placed.

The qualification rounds saw some blistering fast times recorded by the speed specialists. No less than nine of the world’s fastest speed climbing women clocked times under eight seconds whilst ten of the men finished in less than six seconds!

All the reigning World Champions were clearly looking to defend their titles and Janja Garnbret had proved that was possible earlier in the week and so it was with Aleksandra Miroslaw when she successfully beat Di Niu to retain her World Championship status. Miroslaw finishing in 7.129secs whilst Niu faltered slighted just above mid height. Impressively, Miroslaw’s time of 7.129secs was only a fraction of a second slower than YiLing Song’s World Record time of 7.10secs. The small final saw Anouck Jaubert take the bronze medal when she finished ahead of YiLing SONG who slipped at half height on her run. 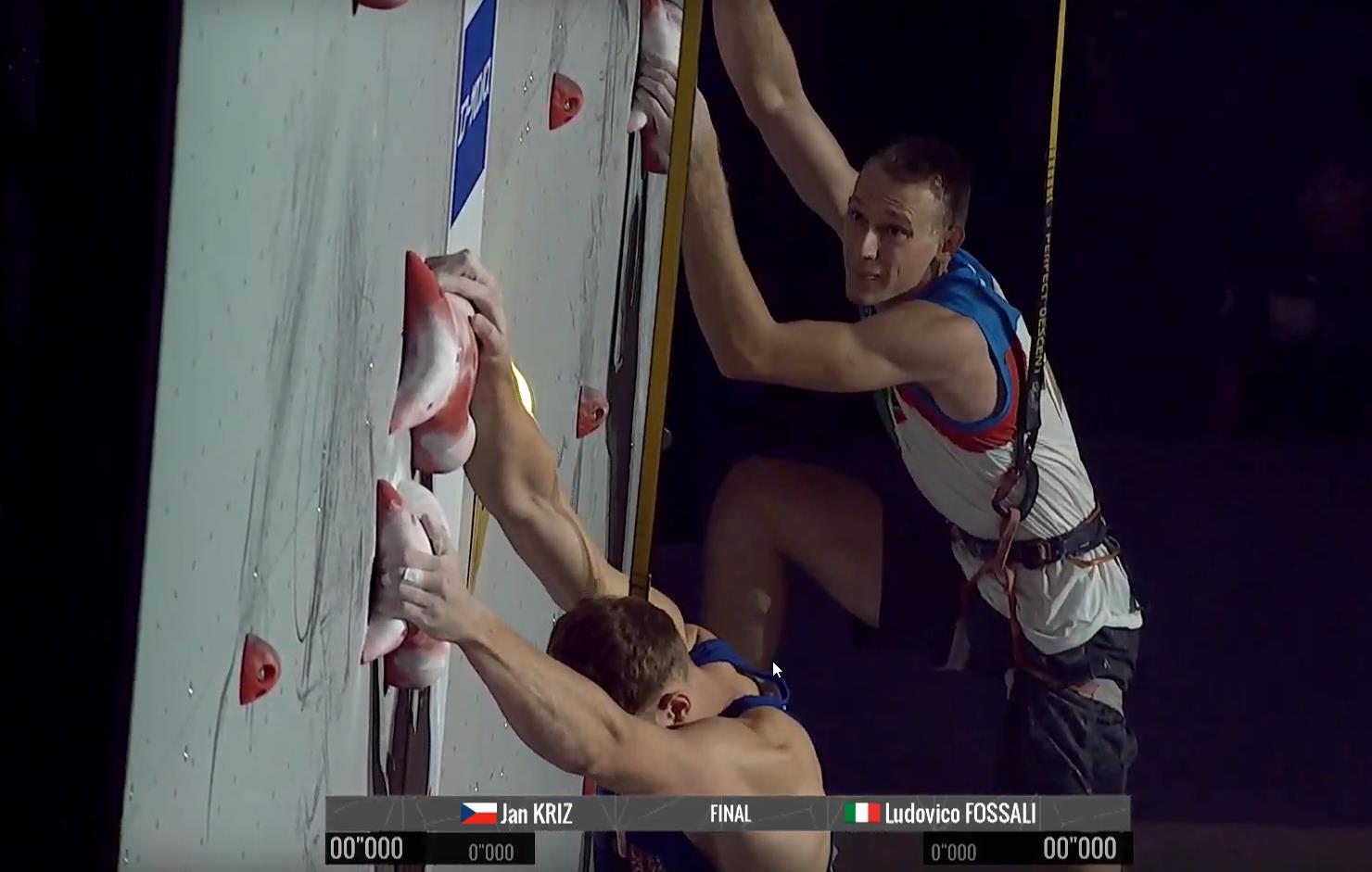 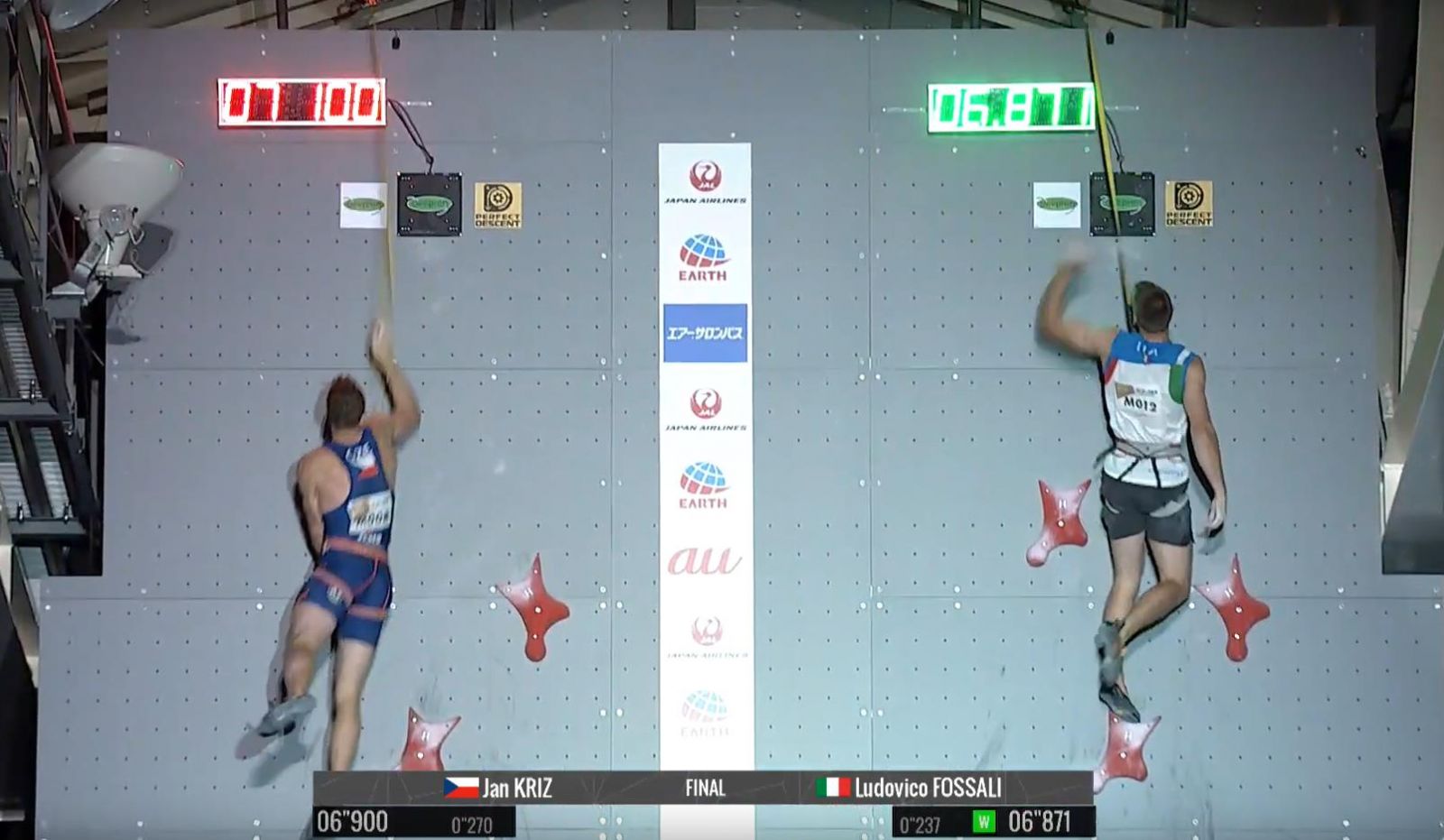 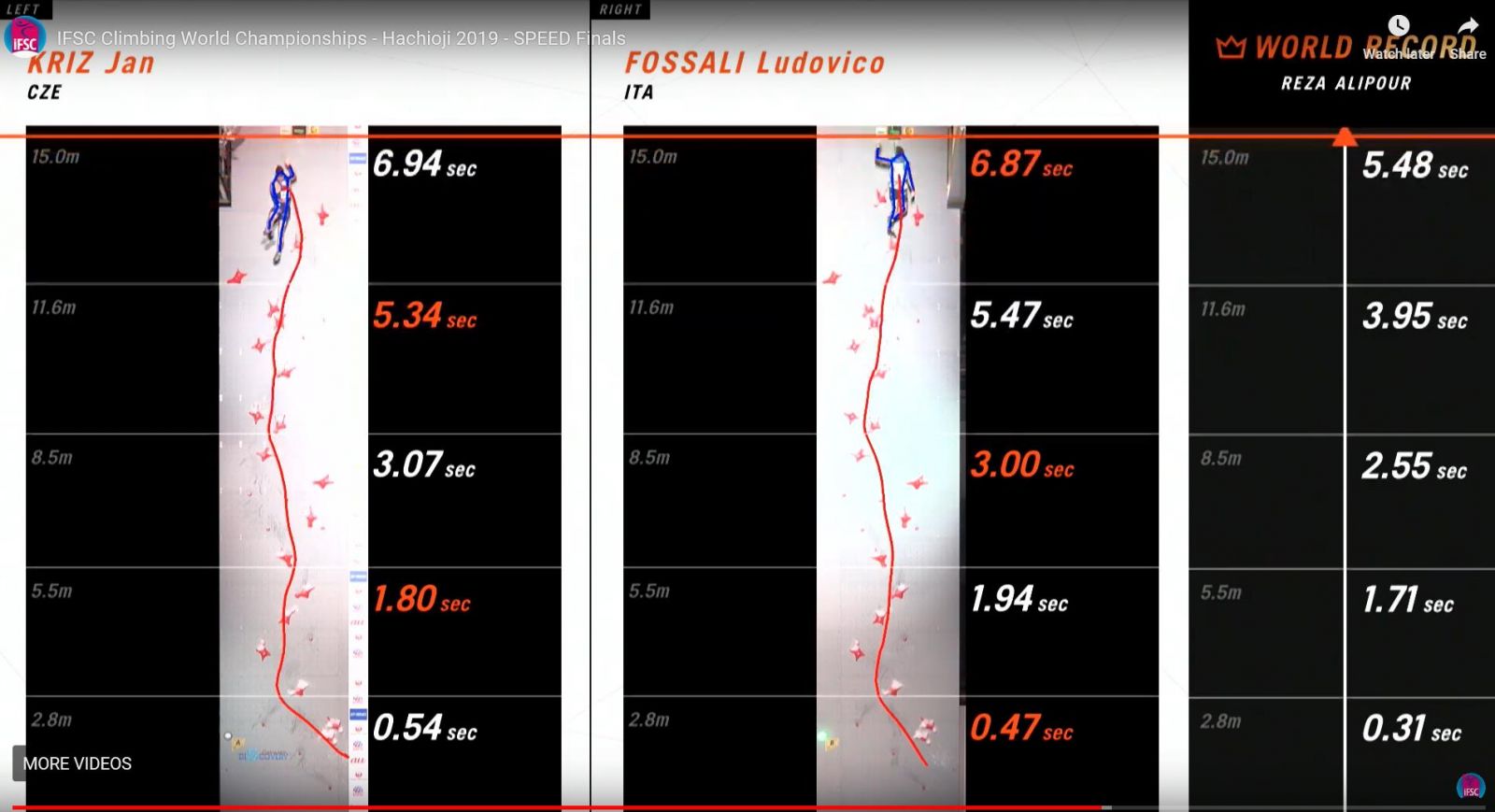 The Men’s finalists at the start, finish and the comparison with current World record runs

The men’s event didn’t go according to form and many of the favoured speed climbers struggled. Bassa Mawem, the current 2019 Speed World Cup front runner, as well as, Reza Alipourshenzandifar, the reigning World Champion and World Record holder both crashed out early leaving the event and the podium wide open. Ludovico Fossali, having progressed to the final when his opponents in early rounds false-started, faced up to Jan Kriz for the final. Both men got away clean and progressed up the wall virtually move-for-move but then both stumbled on exactly the same move. However, Fossali regained his composure to record 6.871 secs as opposed to Kriz who failed to record a finishing time. Perhaps not surprisingly Fossali’s winning time was considerable slower than Reza Alipourshenzandifar’s world record time of 5.48secs but that’s then nature of speed event! The small final was won by Stanislav Kokorin ahead of Danyil Boldyrev; Kokorin retaining his 2018 Bronze medal.

Watch the Speed finals below...