Neil Gresham has burst out of lockdown with vengeance adding two new E8’s to Iron Crag in the Lakes. 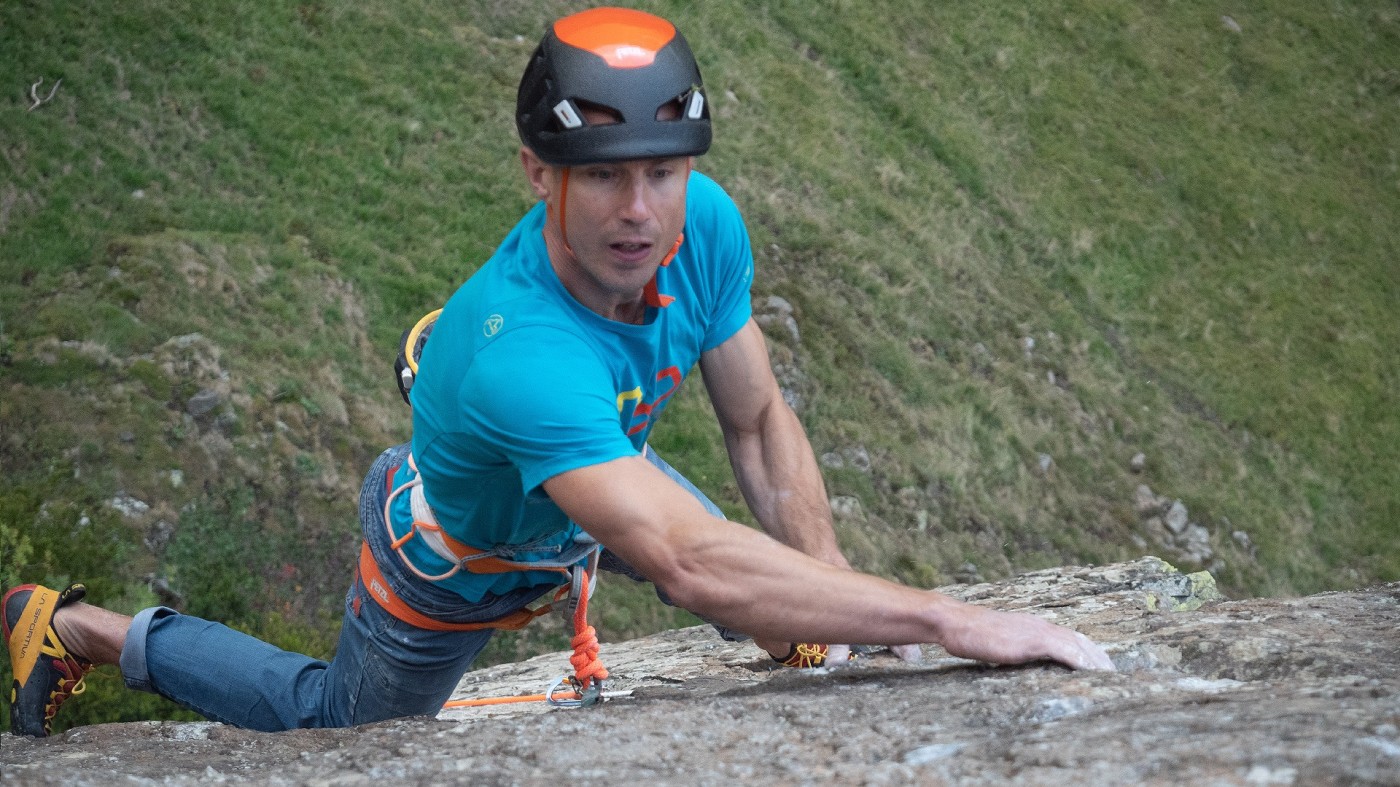 Anyone on social media can’t have escaped Neil’s lockdown posts on fingerboarding and training. Well, it seems he was following his own advice as last week he blasted two new E8’s up at Iron Crag in the Lakes.

Iron Crag, located just south of Keswick, has a limited number of routes but it’s a crag rich in history and big in impact especially so for the right-hand buttress. According to folklore 80’s hero Douggie Hall stopped here on the way to his brother’s wedding and knocked out Western Union (E6 6c/F7c) in a morning in 1986; with 40m of hard climbing on steep rock it set the benchmark for the routes that followed. In 1992 Dave Birkett really stepped up to the plate and added If 6 was 9 (E9 6c/F8a+). It remains one of the hardest routes in the Lakes having only had two repeats the first by Dave Macleod in 2007 and the second by Craig Matherson late last year. Two more significant additions have been added after If 6 was 9; Pumping Iron (E7 6c/F7b+) by Glenn Sutcliffe and Iron Man (E7 6c/F7c) by Al Wilson in 1993 and 2008 respectively.

So to say that Iron crag is well-known for being a hard crag is probably selling it short. It was an obvious point to pick-up with Neil on when we contacted him for some details; ‘I think Lakes climbers regard Iron as one of the hard crags in the area. With routes like If 6 was 9 and Iron Man you need to have sport fitness as well as a head for long run-outs and yes, sure, history is an important part of Lakes climbing. I know British climbers are accused of being nostalgic but this all part of the unique spirit.’

Neil explained where his two new routes go: ‘Ironed Out (E8 7a/F8a+) is a direct finish to Iron Man and Way Out West (E8 6c/F7c+ R) starts up the classic of the crag Western Union and then takes a rightwards diagonal line across the upper headwall in the centre of the crag.’

Climber asked Neil to compared his two routes to other routes he’d done: ‘I’d say that Ironed Out is really similar to James McHaffie’s Fear of Failure (E8 6c/F7c+) on Dove Crag, being pretty physical but well protected or possibly something like San Simian (F8a) in Pembroke. Way Out West compares more to routes like Point Blank (E8 6c) in Pembroke or Nightmayer (E8 6c) on Dinas Cromlech, being slightly lower in the technical grade but more run-out.’

Neil explained how long he’s been looking at these two lines and whether it was hard switching back into action after lockdown: ‘I had a couple of goes at Ironed Out in 2018, then parked it to focus on two new sport lines at Kilnsey. It was great to come back to it this year, especially after the frustrations of the lockdown. I’ll confess to being slightly reluctant to take the fall from the crux on my first few attempts and I definitely needed to get some airtime in order to get my head in gear. As for Way Out West, it’s taken me a while to piece this line together and I must say that it’s probably one of the most fun and exciting trad routes I’ve ever climbed. The upper headwall on Iron Crag is an intimidating feature and the line is totally inescapable once you commit to it.

So did Neil take the ride off Way Out West and/or what was his estimate of the fall? ‘Well I was telling myself all the way that you’d be fine and would just go into space but I’ll confess to being totally gripped and I’m very glad I didn’t test it out. The run-out is probably getting on for 25feet and the last move is an all-out dyno to a jug. I dropped it on top-rope a couple of times when I was practising it because I was too half-hearted so I knew exactly what was required when I got there on lead!’

Finally, we asked Neil if his routes might be a possible on-sight mission for a super psyched climber perhaps: ‘Yes, both routes are a relatively safe proposition for a flash or even an on-sight and Way Out West is fairly low in the grade but crumbs, you’d need to be going well!

Watch Neil trying Ironed Out in the short video below shot for la Sportiva by Hugo Pilcher.

Neil is sponsored by La Sportiva, Petzl and Osprey Europe and you can stay in touch with him via his Instagram page here…