Greg Boswell and Guy Robertson have had an astonishing good week in the Scottish mountains climbing not one but two new X, 10 graded routes. As if that wasn’t enough Greg Boswell on-sighted the crux pitches on both new routes as well! 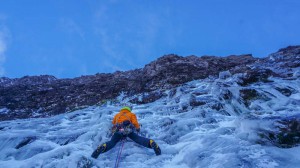 Guy Robertson on the first pitch of The Greatest Show on Earth. Photo Greg Boswell

Their first route, The Greatest Show on Earth (X, 10) on Cul Mor, they did on Monday, January 19th. Greg writes on his blog that the line was obvious and that “the whole lower third of the face was masked in a wave of hanging icicles and smooth fat columns, then came the roof, which stretched the length of the buttress and my arms started to ache just thinking about trying to get over it!” 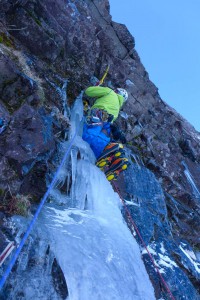 Greg Boswell on the second pitch of The Greatest Show on Earth. Photo Guy Richardson

Guy led the first pitch climbing on “thick ice and massive frozen turf blobs” then belayed below the main pitch. Greg’s intended line was to take the roof and then a hanging corner in the upper wall above. Greg’s write-up describes big overlapping blocks, poor protection (hooks in frozen turf) and a doggy cam to protect committing, powerful and dynamic climbing throughout the crucial second pitch. The crux sounds especially gripping from Greg’s description ; “I rocked up over the lip of the roof on the tiniest of footholds, praying that it didn’t blow off, and eventually found myself in a semi rest but very off balance position. I struggled to hammer in and clip a turf hook…”. Overall, Greg commented that it was “some of the boldest and most technically difficult moves on marginal placements that I’ve done” but that “despite the seriousness of it, [it was] one of the most enjoyable hard pitches I’ve climbed in winter in Scotland!” A number of easier pitches followed after which a 100m or so of easy soloing to the top. 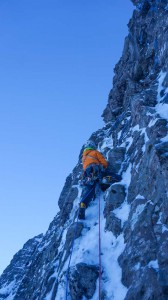 Guy Robertson on the third pitch of The Greatest Show on Earth. Photo Greg Boswell

Three days later, Boswell and Robertson were back in action again at Coire an Dubh Loch for range War (Winter Variation) (X, 10). Their chosen target this time was Range War which they’d been told was “a turfy wet and dirty E4 in summer” – albeit with a new first pitch to the left of the summer line. 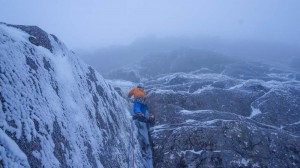 Pitch 2 turned out to be the crucial pitch again. According to Greg; “It was a steep, hanging wall leading to a niche capped by a roof. The wall was smeared with hanging icicles and above the niche there was an ice curtain enticingly hanging over a higher a large overlap.” Greg admits to feeling nervous but having walked-in to the crag on no less than seven previous occasions he felt the time was right to commit;  “it was time to step up and give it a shot. But it looked hard, and more to the point, the pitch looked long and sustained.” Greg describes the climbing. “I surmounted the first pedestal and took a deep breath. “No down-climbing this time” I told myself, to try and preserve energy on this monster of a pitch. I started up with every move nudging my thoughts into the correct headspace, and found myself enjoying every second of the experience. I composed myself and tried not to let the technical torques and moves get one arm more pumped than the other. I continued up and then the pump started to sneak in. I was shaking and looking for the next move, shaking and looking, this process went on until I decided to charge for the niche that looked like it would be home to a nice comfortable rest. Unfortunately this wasn’t to be, the routes steepness was deceptive and although the niche wasn’t as steep as the lower wall, it was still well overhanging. I fought to get some gear in and try and de-pump my now burning forearms, deep egyptians and contortions were tried to relive my arms and finally once I had scoped what looked like the way to sanctuary, I powered on through the steep capping roof of the niche to gain a wild and astonishingly exposed position on the overhanging arête. Hundreds of meters of cliff dropping away below me with nothing but air between me and the coire floor. This is a memory that will last a lifetime!” 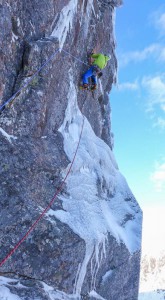 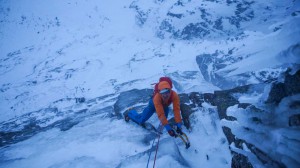 A third and final pitch separated Boswell and Roberson from the top of what is clearly another outrageous route.

To read the full account of these two incredible routes and get a glimpse at first hand of what it takes to on-sight X, 10 graded routes click through here to Greg’s blog. 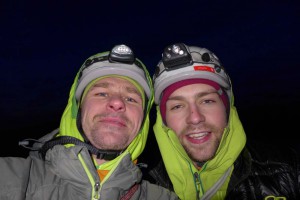