Jain Kim – star of Kranj topping all the routes to take her first gold since Arco 2017 – battling the third and final ‘fried egg’ on the final headwall. Video grab IFSC

Kranj, one of the longest standing events of the IFSC WC lead comp year, typically provides an enthralling competition. Head setter, Christian Bindhammer, and his team provided the backdrop for a very eventful comp forcing the climbers to go full-gas to secure progression through the respective rounds of the comp as showpiece moves (read jumps and bat hangs…) in both the semi and the final rounds provided both thrills and spills in equal measure! For example, the men’s semi-final on Saturday featured a gnarly press-cum-shoulder rotation move that spat of a number of high ranking climbers. Sunday’s men’s final had both an all-out sideways jump low down followed by a bat-hang inversion on a slopey dish high up. The women’s final also had an all-out jump on the lower wall that somewhat prematurely ended the efforts of a number of finalists. 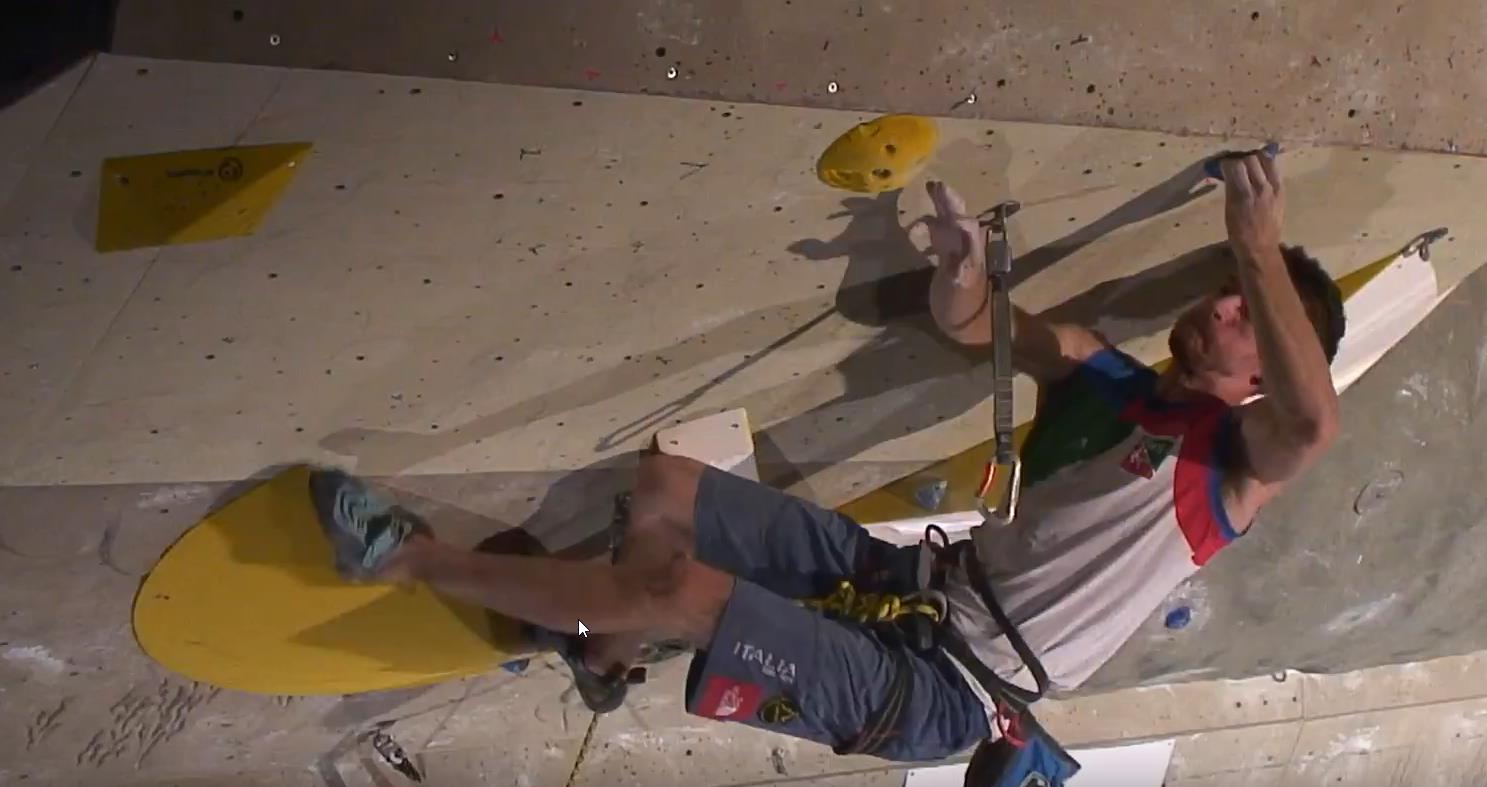 Stefano Ghisolfi easily pulling through the 'Rose move' onto the headwall on his was to his third WC win of 2018. Impressively this was his 9th WC final in a row. Video grab IFSC

The men’s final featured no less than three Italian (including Stefano Ghisolfi) and three Japanese climbers (including Kokoro Fujii); the final two places going to Austria (Jakob Schubert) and Canada (Sean McColl). It was a welcome return to form for McColl and the crowd appreciated hi rather unusual approach to the all-out jump low-down on the final route. 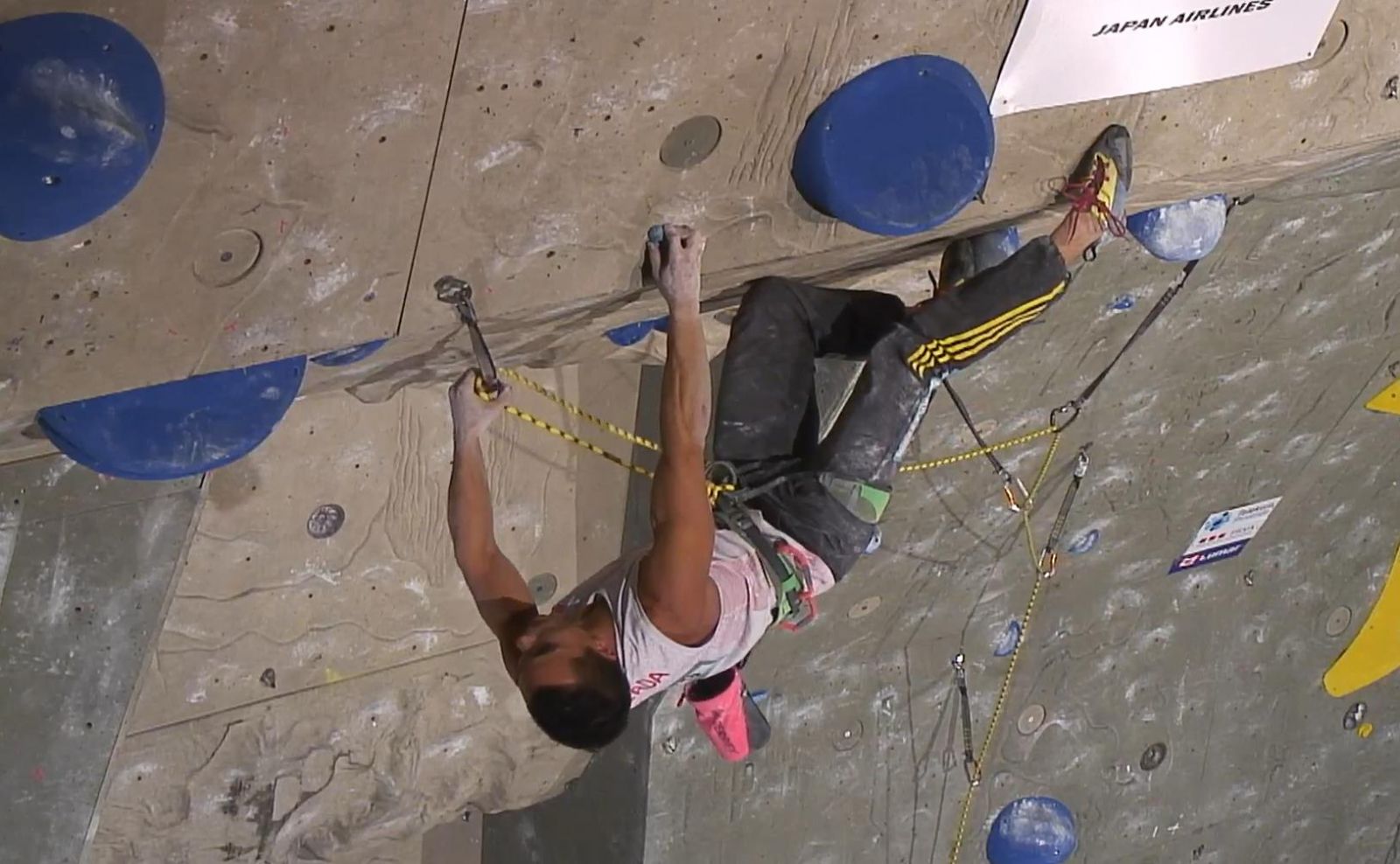 Sean McColl – just emerging from the second of the 'trick moves' on the men’s final, the bat-hang inversion - making a welcome return to form. Video grab IFSC

The Japanese climbers – seemingly having all shared beta – struggled on the bat-hang inversion on the route; Masahiro Higuchi alone progress beyond onto the headwall. He secured third place pipping Marcello Bombardi on countback. Jakob Schubert hit the top hold but failed to hang-on so the win went to Stefano Ghisolfi whose performance was excellent. 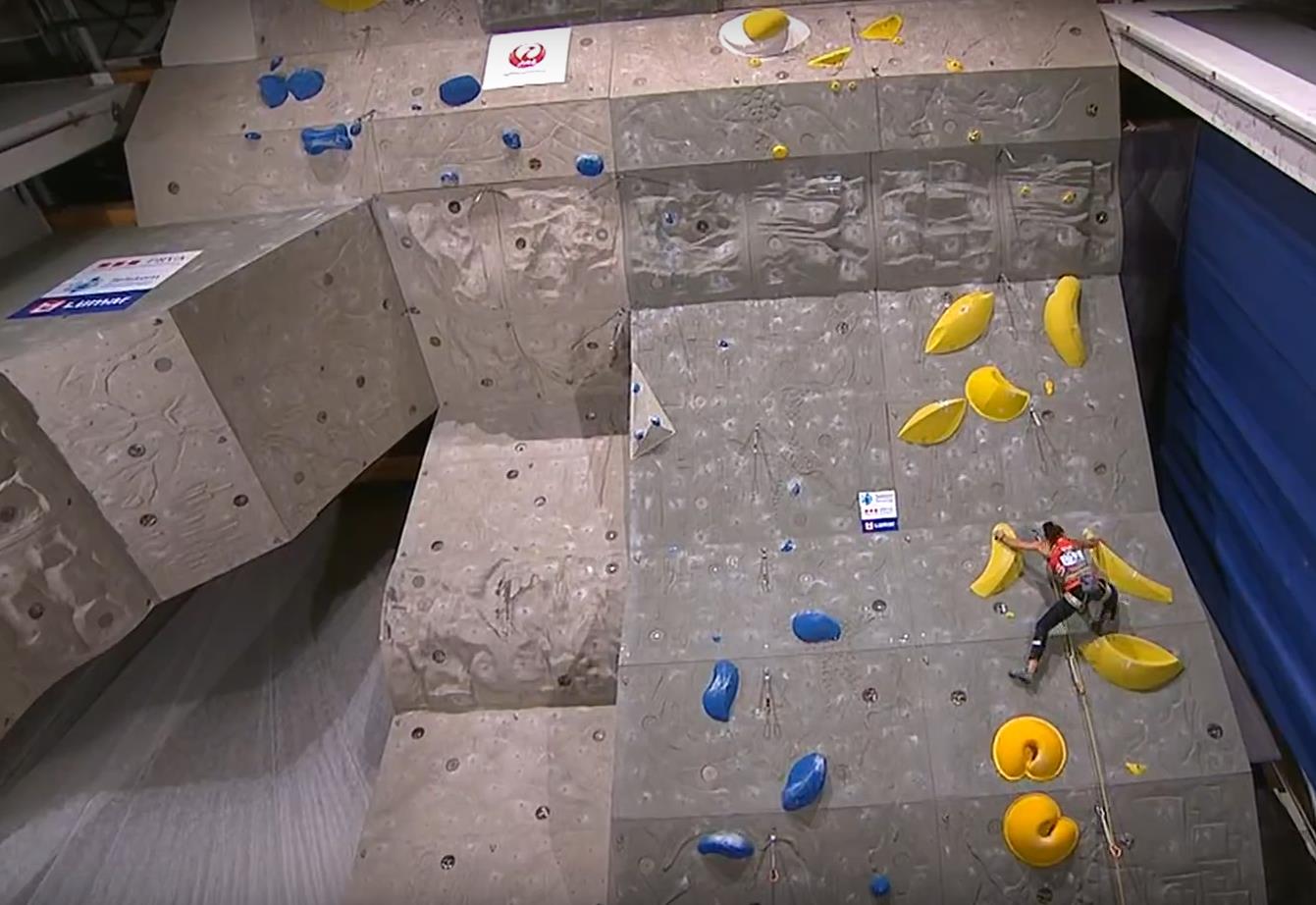 The diminutive figure of Katherine Choong – one of the shorter women climbers – sizing up the all-out dyno on the women’s final route. Video grab IFSC

Although the women’s final comprised a number of new finalists, such as Natsumi Harano and Katherine Choong, that are breaking into WC finals for the first time the majority were ‘regulars’ including such legends as Mina Markovic, Janja Garnbret, Jessica Philz and Jain Kim. The aforementioned all-out dyno stopped Natsumi Hirano, Katherine Choong and Mina Markovic in their efforts. All three Austrians, Katherina Posch, Jessica Pilz and Hannah Schubert latched the dyno and went on to battle three giant ‘fried eggs’ on the headwall. Unusually Jessica Pilz looked a little uncertain and was ultimately out climbed by Hannah Schubert who took bronze - her first ever WC medal.

Janja Garnbret wasn’t, for once, the highest placed finalist yet, as expected, she climbed smoothly and confidently even shaking out and chalking on the first of the fried eggs where the other competitors had looked uncertain. No one with the record that Janja Garnbret would have bet against her taking a medal given she hasn’t missed a podium in two and a half years of competing in senior lead events. As it was however, she fell off the second fried egg and had to be content with silver. 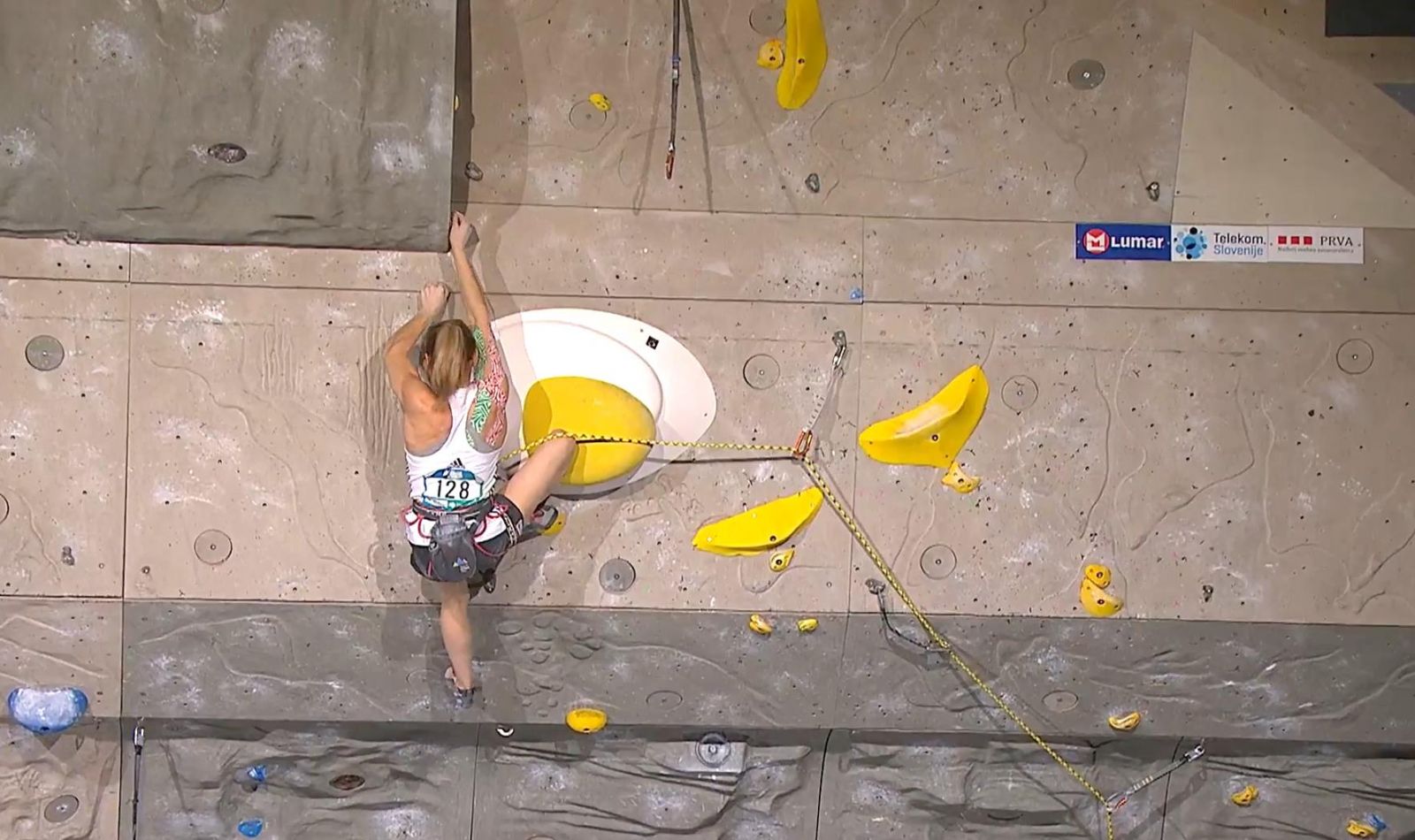 The women’s final, indeed the entire women’s comp, was a masterclass of climbing from Jain Kim; Jain topped the qualifiers, the semi and the final routes climbing in her customary super-smooth manner. Her third win at Kranj was her first WC victory since Arco in 2017. 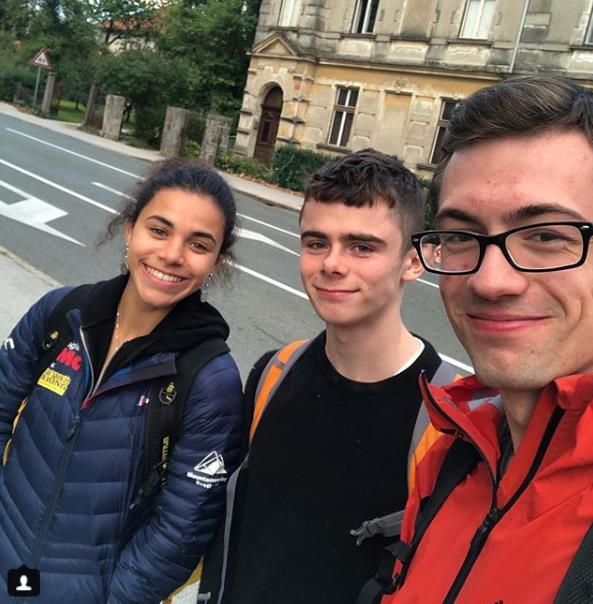 Molly Thompson-Smith, Jim Pope and Will Bosi all made the semi’s.

Team GB athletes had a good comp at Kranj as well. Molly Thompson-Smith continuing her come-back from surgery with a well-deserved place in the semi’s finishing in 16th place. Jim Pope and Will Bosi both made semi’s as well; commendably mastering the heinous barn-door move low-down which took the scalps of a number of seasoned campaigners like Romain Desgranges. Jim finished in 16th and Will in 9th, just one place outside the finals!

Watch the highlights from Kranj below…