Last weekend, some of the very best junior GB climbers and leading climbing coaches descended on Sheffield for the second ever gathering of the GB Climbing Development Squad. 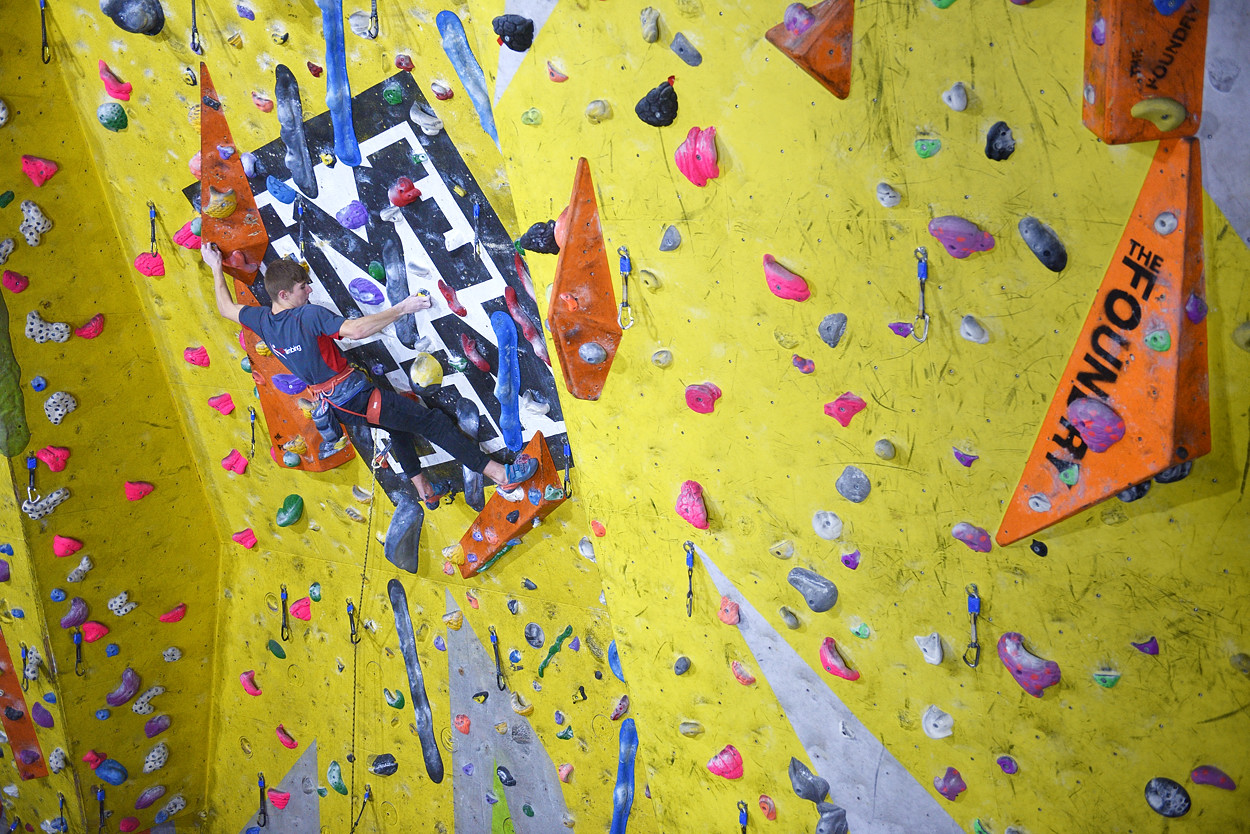 Aiden Dunne bearing down on the Wasp 8a at The Foundry. Photo Keith Sharples

Say what – the GB Climbing Development Squad? It’s a new initiative that has only just kicked-off so CLIMBER went along on the Sunday to The Foundry to see what was happening and to touch base with the team management, the coaches and the squad members.

Ian Dunn, a well-known climber, climbing coach and a member of the team management, explained the background to the Development Squad: “The GB Development Squad is the precursor to entry to the GB Junior Climbing Team. You can apply to join when you are 11 years old and the Junior Category of the IFSC finishes at the end of your 19th year.”

The purpose of the weekend was to bring team members together and put them through their paces on both routes and boulder problems in a competition-style setting whilst the coaches observed and assessed performance. Ian Dunn explained the schedule: “Over the weekend we were all together at Awesome Walls on the Saturday, and then the Squad went to two different venues on the Sunday, the older climbers in the Training to Perform Category of our Long Term Athlete Development Plan went to The Foundry and the younger categories went to The Climbing Works. On the Saturday everyone had a one to one meeting with their Tier Coach, parents and Coaches where appropriate. Whilst this was happening, various Team Building games were happening and some individual coaching was taking place. There was also a Child Safeguarding Meeting for athletes and Parents and a parents meeting.”

Word had got out in Sheffield that the squad would be around over the weekend and some of the locals were keen to see how the team would get on – not least on the ‘blue 8a’ at The Foundry which  had acquired something of a reputation over the winter as locals and visitors alike had been lining-up for the top-out. Murmurings were that it was pretty stiff for the grade – F8b had even been muted. 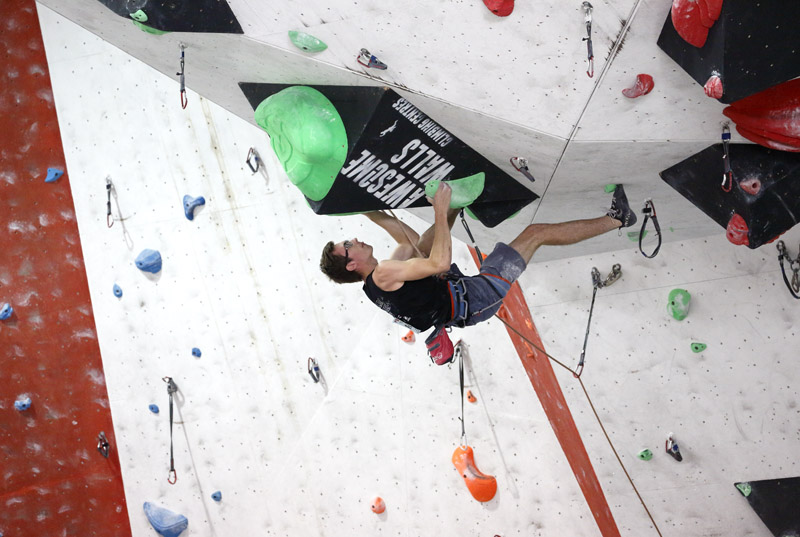 Not surprisingly, the on-form stars including William Bosi, Jim Pope, Aidan Roberts and Pete Dawson had all climbed very well over the weekend. Saturday at Awesome Walls the lead team had ‘mopped-up’ all the routes set. Some, Jim Pope included, had then had a session Saturday evening at The Climbing Works on the hard circuit. You might be forgiven for thinking that the Saturday session at Awesome/The Works would have been sufficient but come Sunday the team bounced into The Foundry hungry for more.

Ian Dunn summarised the team’s performance during Sunday’s session at The Foundry where the lead team had been set six routes to do – a 7c, three 7c+ and two 8a’s, one of which was the so-called blue 8a. “William and Jim both flashed the blue 8a and everything else, Pete and Aidan smashed it too with ascents of the wasp 8a and everything else.” So how did the girls get on? Ian Dunn again: “Jo Neame from London was the outstanding female athlete climbing as well as many of the boys and better than quite a few.” And what about names for the climbers who were emerging: “Jo Neame has definitely done some training over the winter and looks like she is making good progress. Aiden Dunne and Kieran Forrest made some good ascents and hopefully are on target for a good year.”

In amongst all the action CLIMBER managed to talk to a number of the squad (William Bosi, Jim Pope, Aidan Roberts, Jo Neame and Kieran Forrest) to get their take on the weekend as well. For most - including William Bosi and Jim Pope, now some of the older team members - visiting different walls and trying hard routes was a major positive from the weekend as William explained: “For my personal climbing just getting to climb new routes for on-sight practice like the ones at the Foundry was great”. Jim echoed these sentiments as well, plus he clearly enjoyed climbed alongside some of locals: “It was really cool to have team training at a wall with a lot of history, and to have climbers like Seb Grieve climbing among us”. As Ian Dunn had said, both had on-sighted the ‘blue 8a’ as expected – but what about their assessment of the grade? Will: “fair for F8a, at least indoor” and assessment which Jim agreed with: “Hmm, I managed to on-sight it and reckoned it felt pretty bang on for the grade.” Kieran Forrest also took a shine to the route: “The blue was by far my most favourite route, I tried it towards the end of the day and was quite tired, and I didn’t top it, but yet it was still my most enjoyable route.” 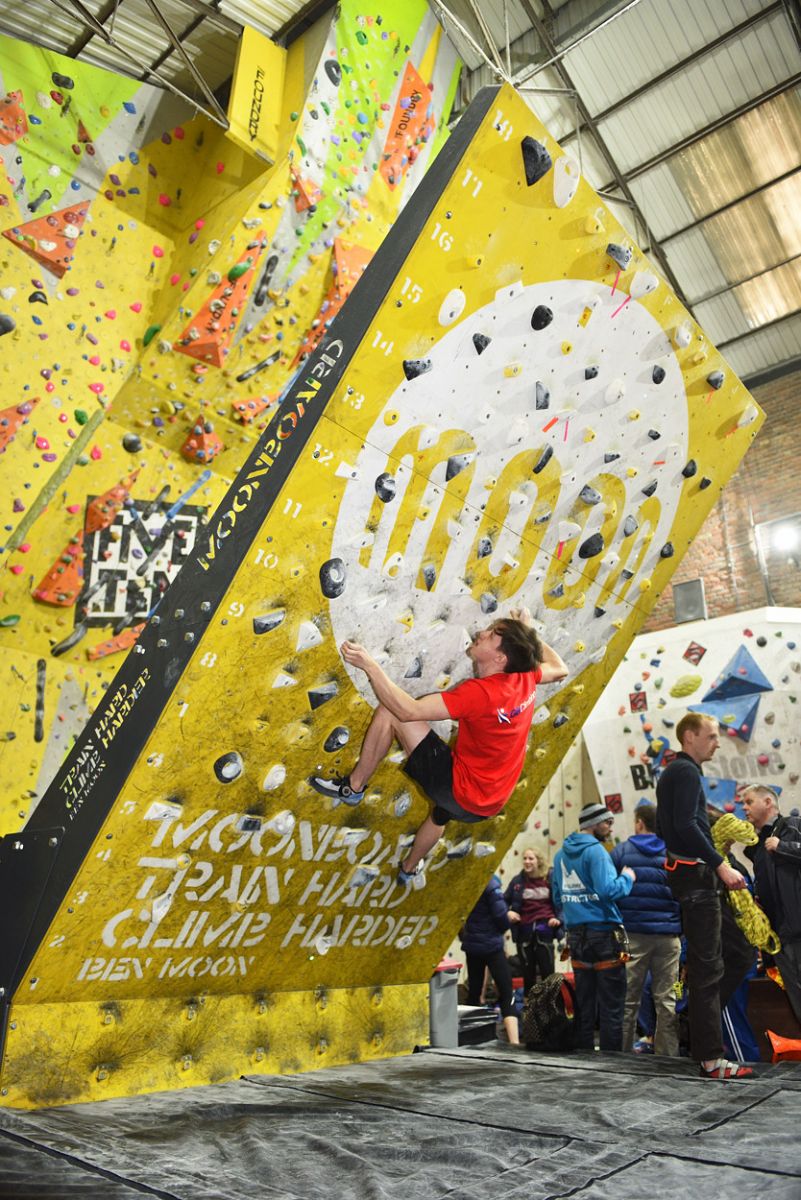 Jo Neame’s stand-out moments involved the routes as well: “I really enjoyed the weekend and the main positive for me was being able to try loads more hard routes than I would ever get to try at home.” Specifically: “My stand-out moments were probably flashing the yellow 8a on the side of the comp wall at Awesome Walls and getting much further than expected on the yellow and black 8a (I thought was hard for the grade!) up the centre of the comp wall at The Foundry. I pulled as hard as I could on this route and was pleased with how far I got!”

Aidan Roberts hadn’t been to the Sheffield walls before and seemed especially taken by the bouldering on The Wave: “Having never been to The Foundry before it was nice to experience The Wave so I’d say that was my favourite. It’s nice to climb on an old school wall with plenty of history and I really enjoyed the style. There wasn’t much hard stuff but some of the features only were good challenges.”

William Bosi, also picked-up on the mentoring opportunities the weekend offered: “The main positive for myself had to be the satisfaction I get from helping the younger members of the team with any tips/advice I've picked up over the years. In a way repaying the help I got from the likes of Luke Tilley when I was new on the team.”

It’s early days yet for the Development Squad initiative but if the psyche from the team management, coaches and climbers is anything to go by, the future for the team could be bright indeed.

CLIMBER Magazine will be looking at the Development Squad in more depth in a forthcoming article.