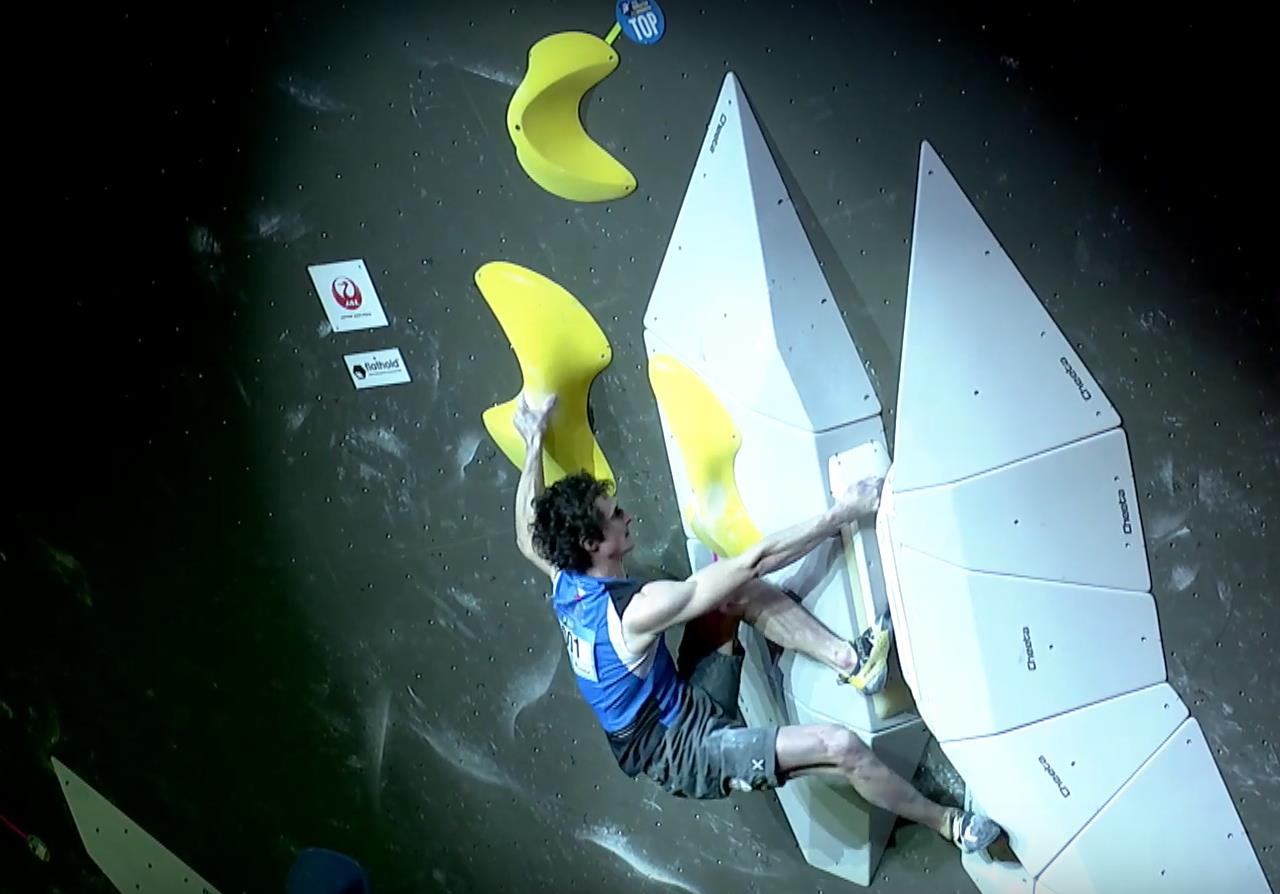 The IFSC World Cup bouldering season kicked off over the weekend at Meiringen, Switzerland. Although a relatively recent addition to the WC circuit, Meiringen has quickly become a very popular event. Given that 2019 is the run-in year to the 2020 Olympics, this year’s comps will be especially germane. Team selection and/or athlete attendance throughout the year will be impacted by the Olympics as well as the funding made available to the national squads by their respective governing bodies. Audiences are going to see more multi-discipline athletes at all the events as they look to hone their skills and work towards qualification for Tokyo. Sadly, some specialists in some teams might not get the support needed to attend. 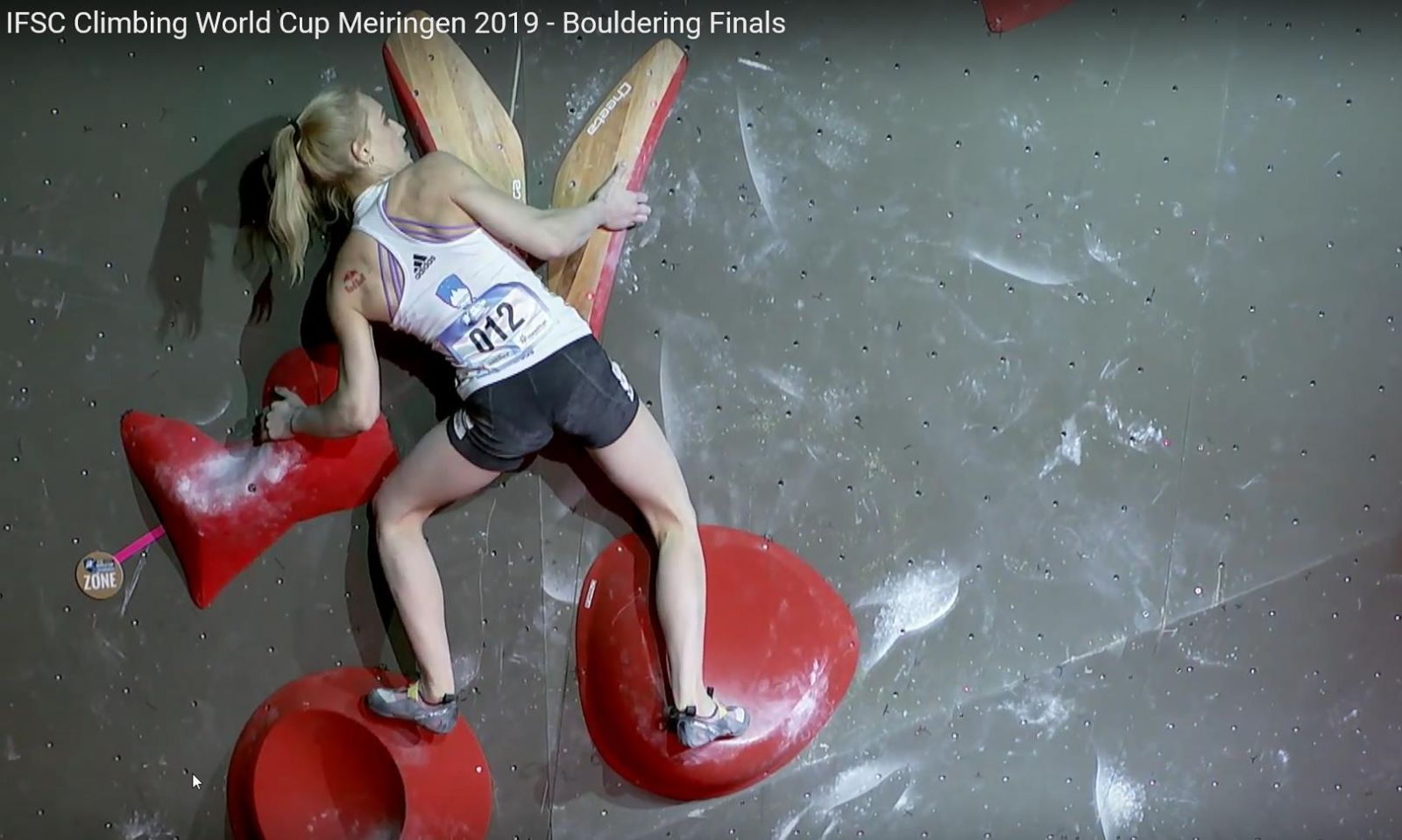 It was against this emerging backdrop that Meiringen got the 2019 WC bouldering season underway. Not surprising therefore that Meiringen was keenly contested as all potential Tokyo competitors looked to dust off the winter training cobwebs, hit the ground running and start to collect crucial qualification points.

For a run-down of the majority of the big players for the 2019 combined titles, and likely Tokyo contenders, we only need to step-back to the Innsbruck World Championship last year. Click here for the CLIMBER report into that Championship. Arguably the shortest odds would be for Adam Ondra and Janja Garnbret but comp climbing, like all high level sporting competitions, is never over it’s over and competition will be fierce right down to the wire. 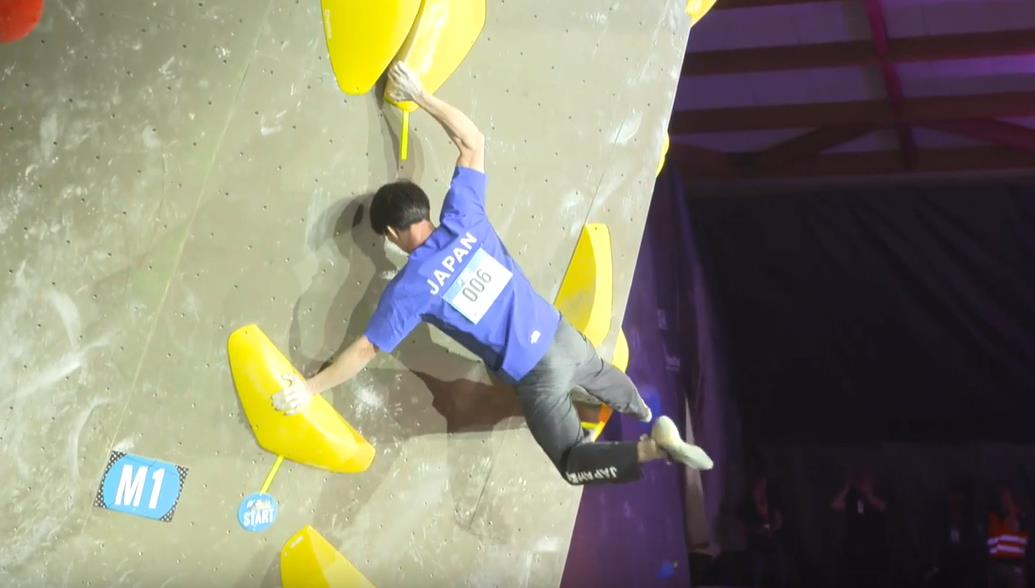 In terms of Team GB interest our blocmiesters were out in force for Meiringen; Shauna Coxsey was making a very welcome and long anticipated return to top-flight comps whilst Nathan Phillips was looking to capitalise on his emerging presence on the world stage following his 6th place finish last year in Innsbruck.  Lead/speed climbers Will Bosi and Molly Thompson-Smith were also down on the start list for Meiringen although unfortunately Molly withdrew with a finger injury at the last minute. In addition, Dave Barrans, Aidan Roberts, Billy Ridal, Hannah Slaney, Emily Phillips and Jennifer Woods were all also on the starting line-up.

When Friday’s qualification round at Meiringen finally got underway it was quite remarkable. A stand-out performance came from Nathan Phillips who finished with five tops, five zones in five attempts; the best score in the men’s event! No less than 18 other male competitors finished with five tops and bonuses but all took more than Nathan’s five attempts. To understand just what an achievement that is look down the field and see seasoned competitors like Jan Hojer, Sean McColl, Jacob Schubert, Dave Barrans, Domain Skofic and Romain Desgranges all below the semi-final cut-off point!

Women’s qualification was equally brutal. Only Janja Garnbret topped all five blocs in a hard first round; all the more impressive then was Emily Phillips who posted a super impressive four tops/bonus to come in fifth place easily earning her place in the semi’s. Shauna, climbing in her first WC bouldering event for almost a year, also went through to the semi’s. As with the men’s qualification, some very talented climbers failed to make the cut-off for the semi’s including Jessica Pilz, Hannah Slaney, Brooke Raboutou, Jain Kim and Margo Hayes.

The men’s semi’s on Saturday was, as expected, pretty brutal; Ondra alone got 4 tops whilst Tomoa Narasaki and Rei Sugimoto got 3 each; the remaining climbers were all strung out below. Amongst the group to not progress beyond the semis were Aleksey Rubtsov, Jernej Kruder, Alex Megos and Stefano Ghisolfi. Sadly Nathan Phillips wasn’t able to replicate his qualification performance and finished in 19th overall. Remarkably, no less than four Japanese climbers (Tomoa Narasaki, Rei Sugimoto, Kokoro Fujii and Tomoaki Takata) went through into the final along with Adam Ondra and Jongwon Chon.

The women's semi finals saw Akiyo Nogughi push Janja Garnbret all the way; both climbers finishing with 4 tops and bonuses. Shauna qualified in fifth place behind Fanny Gilbert and Petra Klinger whilst Oceania Mackenzie from Australia took the 6th and final place. Emily Phillips finished in 20th overall with a highly commendable performance. 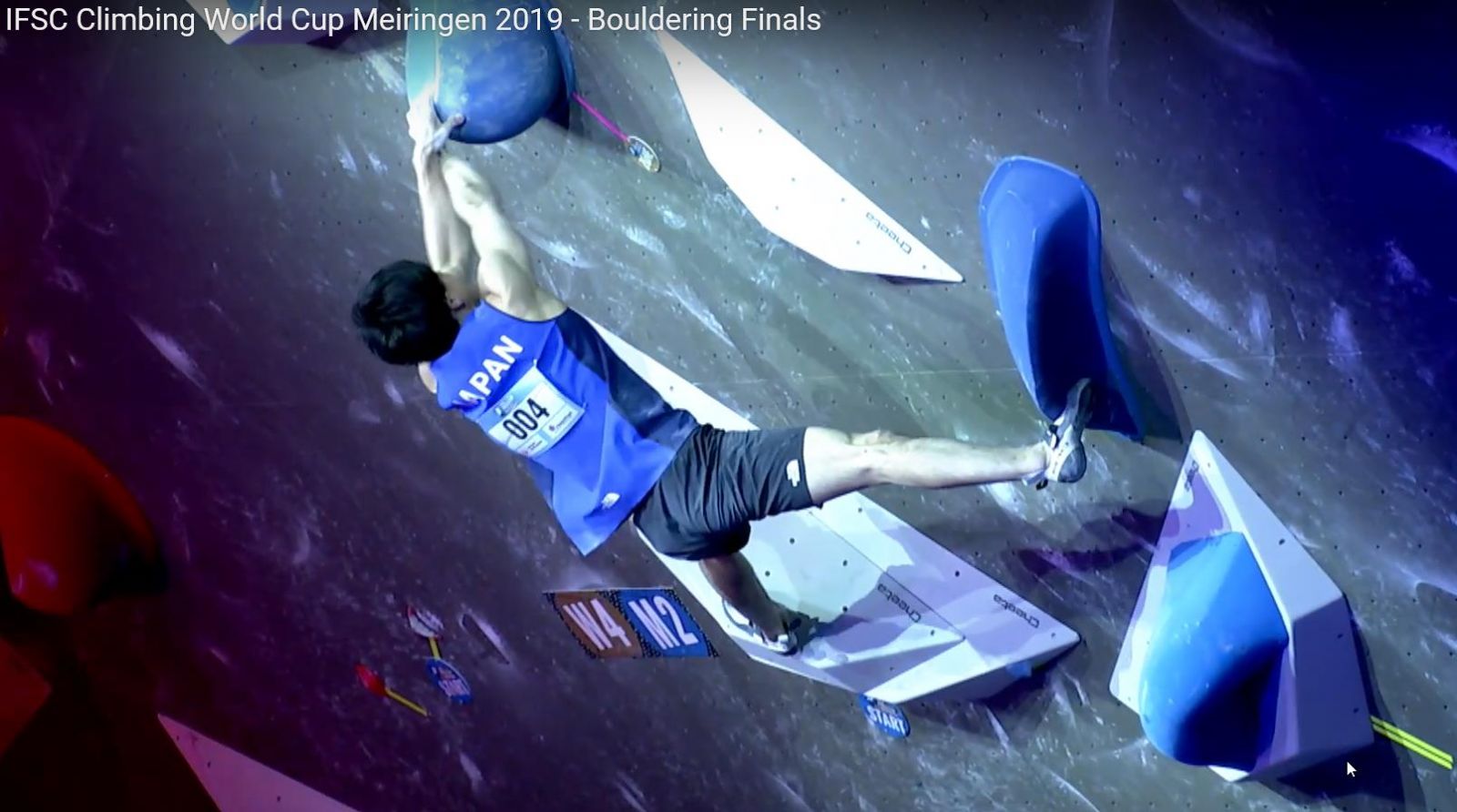 The men’s final started full of anticipation, not least because head setter Jamie Cassidy, had promised “something special” for the men’s event. M1 was all about a running jump start; full-on parkour style. Tomoaki Takata executed the start perfectly leaving all the other finalists including Adam Ondra – taking several attempts to dial-in the funky start. All but Kokoro Fujii topped out in the end however; M1 therefore nicely splitting the field. M2 involved a hard mantle start followed by yet more complex hard moves involving further tow hooks and compression moves;  Fujii, Sugimoto and Ondra all topped. M3 was the obligarory slab involving a full-on mantle onto a single rounded hold with a gnarly crimpy rock-over to finish. Tomoa Narasaki topped out but only Ondra flashed. All eyes went to M4 and the Cassidy surprise finally became obvious - a jam crack! Tomoa Narasaki needed  a top on either his first or second go to win but, he along with the rest of the Japanese team, completely failed to make any impression on the Cassidy special. Jongwon Chon managed to miss out the jam crack to reach the zone hold but couldnt progress beyond that. The stage was set therefore for Ondra to come out and deliver a jamming masterclass. Ondra didn’t disappoint; he totally bossed M4 stopping not once but twice in the jam crack to show-boat to the audience before crusing to the top! Ondra got the win he deserved and the Japanese climbers got a free jaming masterclass. Percy Bishton had previous set jam cracks in WC bouldering events in Vail (2012) and La Reunion (2007) and once again the venerable art of jamming split the field. Doubtless all climbers will now be polishing their jamming techniques as much as their parkour skills! 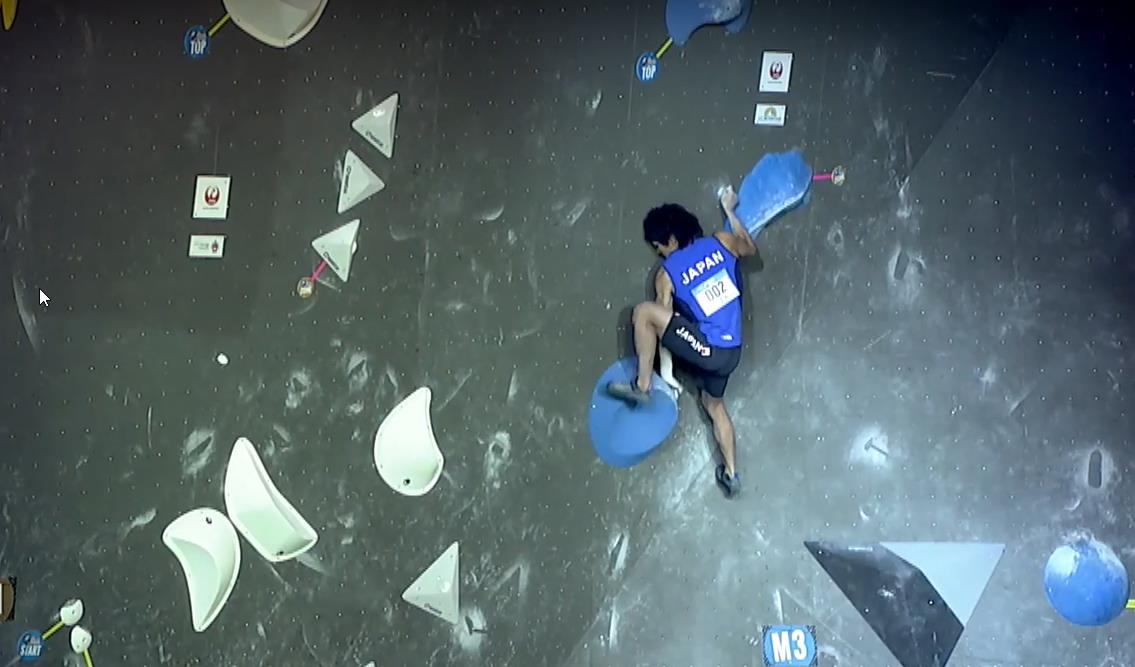 Following the excitement of the men’s event – future events will see the men and womens event alternate – the women’s final kicked-off with a parkour style bloc involving a flip between to sidepull volumes. Climbing second, Shauna topped it on her second attempt; demonstrating a total easy with the style. Noguchi also dispatched W1. Shockingly however, Janja Garnbret failed to top W1 despite breezing through the parkour start only to repeatedly drop the final rock-over; Garnbret it seemed was rattled – probably by the need to tape a finger to stop bleeding. W2, a techie slab with a funky slap for an undercut volume on a sidewall, saw a switch in fortunes however; Petra Klinger flashed it whilst Oceanio Mackenzie and Janja Garnbret complete it on their second go whilst Fanny Gilbert scraped a top with literally seconds remaining. Neither Shauna nor Akiyo could find the sequence to unlock it within the four minute time allowed. 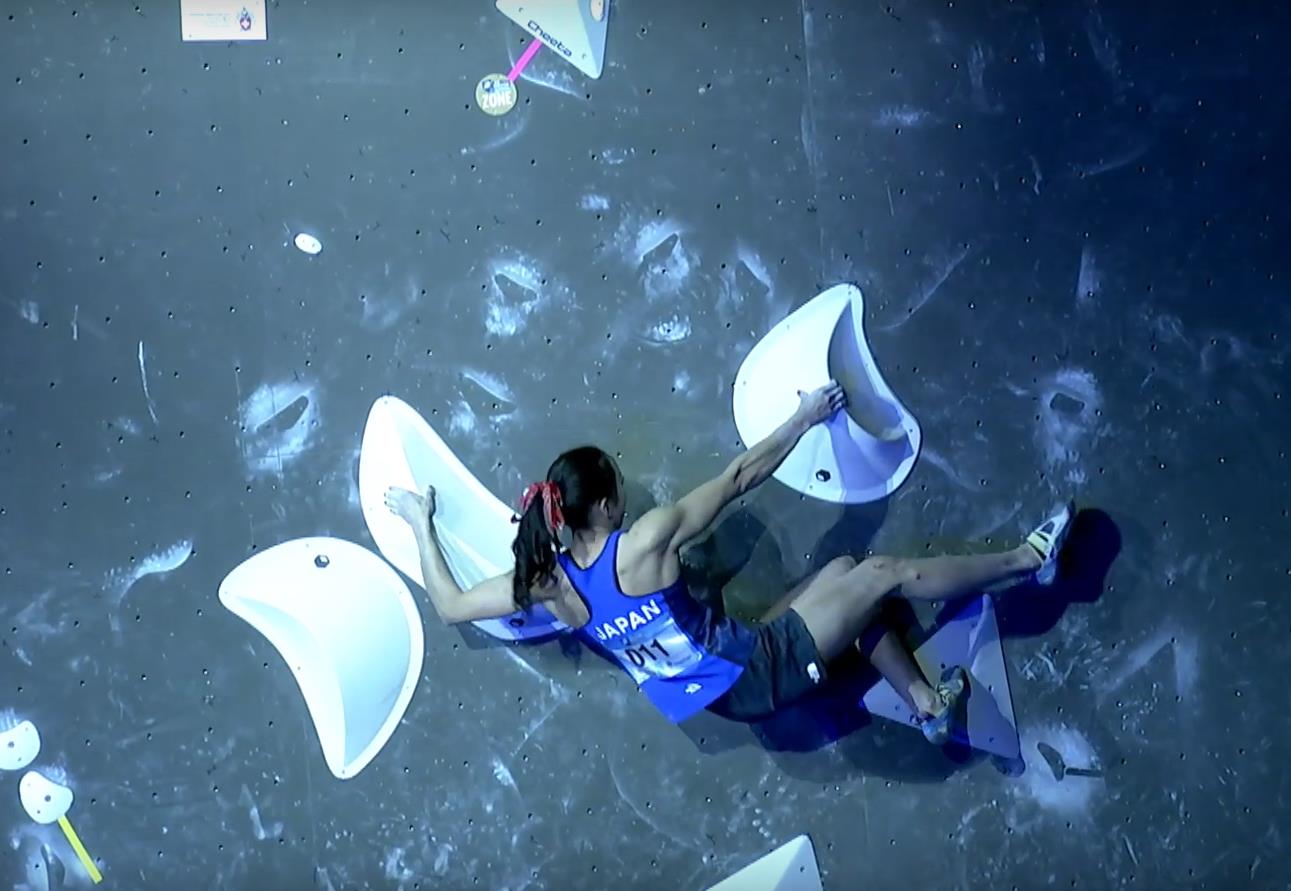 Midway through the women’s final all six women had a single top apiece so it was very evently balanced. W3 however delivered not only a split in fortunes for the finalists but also an interesting insight into the strength and flow of the competitors. Shauna, out second, utterly cruised W3 showing both great strength and flow as she pulled seemingly effortlessly through the steep crimpy and core moves. Only Janja Garnbret matched Shauna’s flashed ascent of W3; even Akiyo Noguchi struggled taking several attempts before topping out. Going into W4 Garnbret lead Coxsey (on countback) with Noguchi in third. W4 had more than a whiff of parkour about the initial powerful moves and only Noguchi and Garnbret  managed to top out. As many expected that gave Janja Garnbret her first win of the 2019, Akiyo Noguchi came in second with Shauna a well-deserved third place. 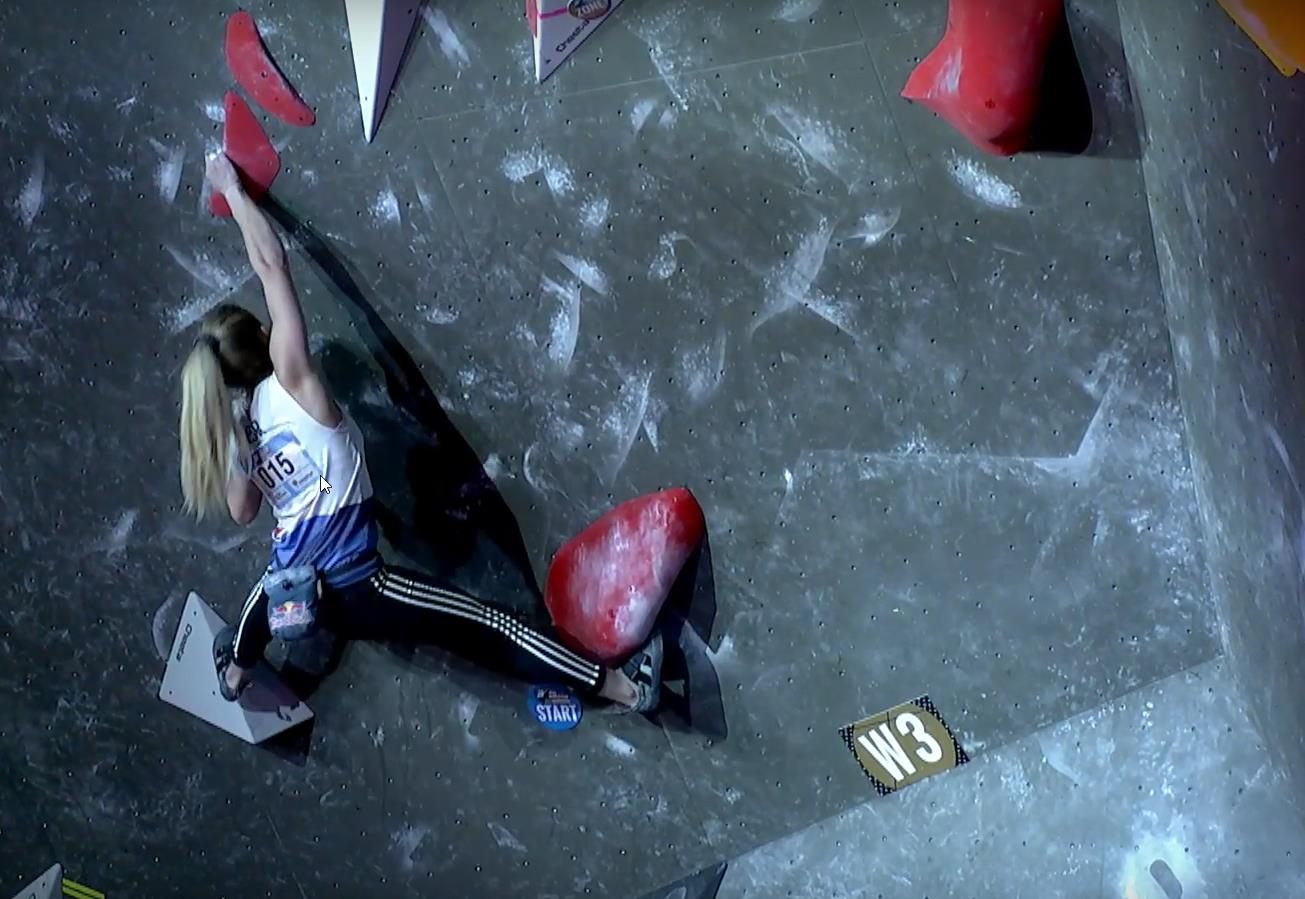 That Ondra and Garnbret took the Meiringen golds wasn’t the greatest surprise ever! It looked as though the women’s title will be a contest between Garnbret, Noguchi and Coxsey but the men’s loks more open than that and the style of setting is likely to play a considerable influence; jamming and parkour blocs aside!

For Team GB it was a promising start with Shauna bring home what (hopefully) is the first of her 2019 medals! And if Nathan Phillips can develop the sort of form he showed in his qualification round he could easily podium as well. Will Bosi, Emily Phillips and Hannah Slaney will all be looking to increase their places and make semi finals - or better - as they get into their flow.

One thing is for sure, 2019 will be a very long year for the athletes with Olympic dreams.  WC bouldering and lead/speed comps will all flow into the Tokyo and Toulouse qualification events later in the year. Next weekend the action moves to Moscow for WC bouldering and speed so stay tuned for how that unfolds! 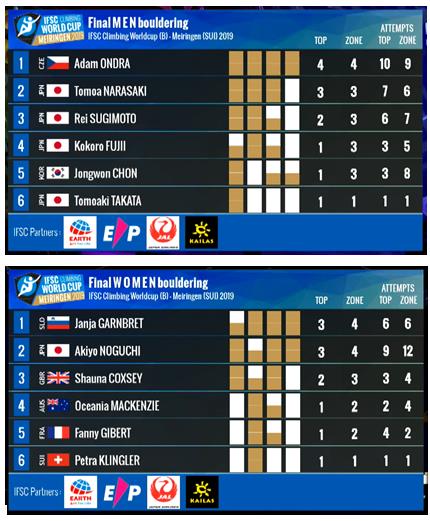 Watch the Meiringen final below…