As we reported yesterday Mina Leslie-Wujastyk has just repeated Bat Route (F8c), one of the classic test-pieces above the cat-walk at Malham. 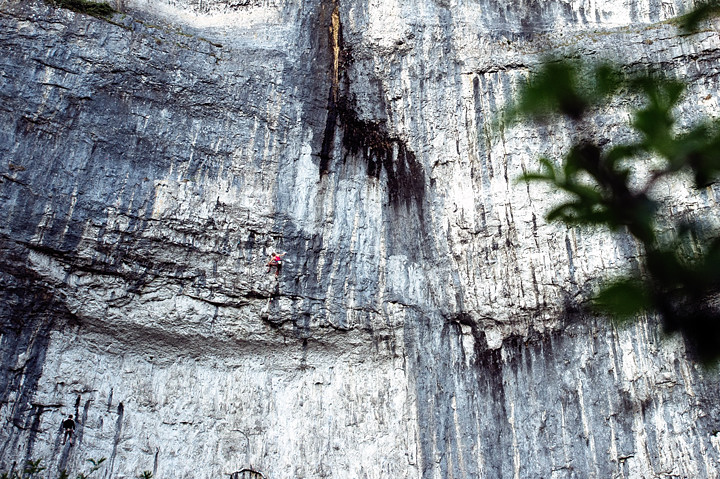 Mina starting out on the upper section of Bat Route after the bat rest during a working session. Photo Jordan Manley.

Bat Route was first done by Mark Leach back in 1989 – a year after he did his near-by classic Cry Freedom. Both routes are massive undertakings blasting up the centre of the Cove involving hard boulder problems as well as massive endurance requirements. They have become coverted testpieces although both routes have had been through the grade mangle albeit for different reasons.

Cry Freedom was originally given F8c by Leach although subsequent repeats found easier sequences and the grade tipped back to F8b+, not least when Jibe Tribout polished it off in double quick time in the midst of a monster multi-day climbing fest back in the day. Since then Cry Freedom has re-gained something of a fierce reputation and has been reinstated at F8c. The general consensus is that it’s just too hard for F8b+. Its reputation bumped up a notch when Ondra failed to on-sight it during his first visit to the UK in 2011.

Bat Route, on the other hand, started life at F8b+ and was repeated at that by second ascensionist Tony Mitchell. All seemed well with the world - until some ‘crucial’ holds came off. After years in the wilderness, Bat Route was eventually re-instated by Steve McClure in May 2008 albeit it at the harder grade of F8c/+. When Steve did his ascent a significant section of the headwall was wet forcing Steve to use a slightly different sequence than what was perhaps thought to be the proper line. The second ascent of the harder version was done by Neil Mawson in 2010. Neil however used a new sequence using better holds that had been wet and hence ‘off-limits’ to Steve during his ascent. Neil’s comments at the time were interesting to say the least; “I couldn't see the holds Steve used let alone do it his way!" Using Neil’s sequence the grade has settled at F8c and Bat Route has become a ‘must have’ tick for the sport cognoscenti and its not uncommon to have several climbers all trying it at the same time. Buster Martin became the youngest climber to repeat the route in 2013 at the age of 16 years. Perhaps inevitably, Adam Ondra has done the only on-sight of Bat Route back in 2011. Bat Route in fact is even longer than Cry Freedom. The hardest climbing, a tough boulder problem in its own right in the prominent roof at about one third height, leads to a kneebar rest (just visible in the bottom left-hand corner of the photo below) after which the still hard wall above puts a heavy strain on endurance. 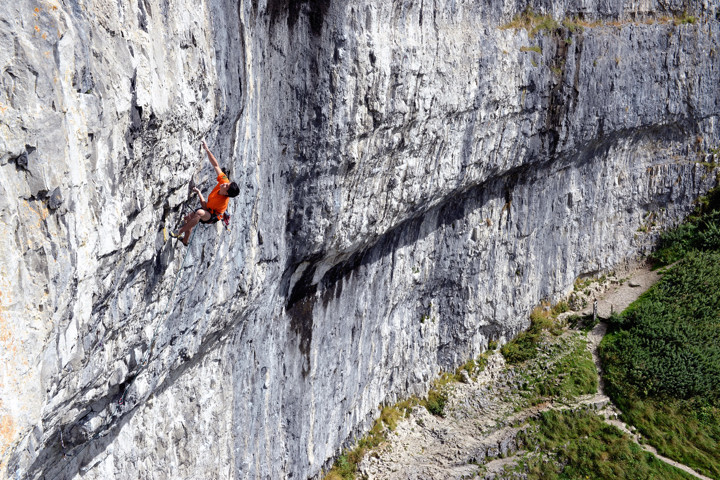 So, history of Bat Route sorted, CLIMBER are pleased to bring you Mina's thoughts re her ascent in a short Q&A...

You got the red-point on your forth tie-in on Friday at 21:00hrs we understand. It was in doubt right till the very end though climbing the last section on wet rock miles above the last bolt. You must have really been psyched for the send as well as having confidence in you own abilities?

Yes, it was pretty touch and go! I really wasn't expecting to do the route that go (I was pretty tired and 4th go of the day isn't usually my strong point!), it was only on the last part of the headwall that it dawned on me that I had a good shot at it. After some power grunts and surprise at still being on the rock, the main hard climbing was over but there is still a section above the last bolt - it isn't hard compared to the rest of the route but it's not 1a either. When I got to that section I looked up and there was a mini waterfall of run off coming down on me; my hands, my face, everything was getting wet! Looking up, the very first part of the last section was dry but there were a lot of wet holds higher up (not just the juggy ledge but some smaller holds before it were soaked too)! I genuinely thought "ah, damn, this is annoying. I've essentially done the route but I don't think I'm going to be able to finish it in these conditions". Then I rallied and my inner voice said, "Right, come on, you are either going to do this in epic conditions and it'll be really exciting or you're going to take the whipper of a lifetime and cure your fear of falling!". So it was psyche for the send that got me through for sure! Plus some heavy breathing, self-talk and the odd weird squeaky noise….

When you’re in redpoint mode you seem very focused and determined and don’t appear to suffer from self-doubt or nerves in any way. Does your yoga help you there or have you discovered an inner calm that lets you climbing at your best some other way?

Wow, that is not always how it feels on the inside! I have the same red point nerves and self-doubt as everyone else, I guess it just takes some extra factor to calm down. In this case, I really think it was the fact that I didn't think I had it in the tank on that go. I was really relaxed and just enjoying the battle, not expecting to do it. Then, I guess, right at the end, I was so psyched that I just went all out and gave it everything. I think yoga has helped me, definitely with breathing while I'm climbing and trying to shut out unhelpful thoughts (especially at rests when the mind is wandering more) but on the whole I would say that I have all the same ups and downs as most people do when red pointing. This year I have made a big effort to be kinder to myself…..it works some days and not others!

Paradoxically, you did Bat Route last Friday as Shauna and the rest of the Team GB bouldering stars were resting ahead of the first World Cup bouldering event in Toronto – a team that you used to be part of until you decided to leave climbing comps and concentrate on climbing outdoors. The switch has clearly been beneficial for you. We’re guessing that you have no regrets on that decision and do you think that climbing comps are perhaps ‘holding back’ other athletes from some stellar performances outside?

Absolutely no regrets. Although I admire the skills of competition climbers and am often in awe of their physical and mental strength, I am much more at home at the crag. It took me a while to work out what I wanted and part of that process was doing competitions for a while but I feel much more settled, fulfilled and challenged in the right way now. I'm sure other competitors could do more outside if they weren't focussed on competing, but realistically, we only try hard enough and have the inner drive for things that we are passionate about. If you really enjoy competitions and strive and thrive there, then that is where you will do well, and vice versa. Hard to force it in a different direction.

Your ascent of Bat Route is the first female ascent and your second F8c after Mecca Extension at Raven Tor last year. As well as being a great role-model for the BMC you’re rapidly becoming a real inspiration for many on the female climbing scene as well a few guys! How do you see your climbing developing from here?

I'd like to do more route climbing for sure. I'm really psyched to try more hard test pieces in the UK and also to travel and route climb. Katy Whittaker and I have plans to go to Waterval Boven and Wow Prow in South Africa, Red River Gorge in the US and also Badami in India.

Moving ahead, what’s next then for the formidable MLW send-train? Maybe something like Progress at Kilnsey now that the Malham season is coming to a close for the summer, or else something in the Peak – Kaabah at The Tor is very popular at the moment or something off the beaten track like The Bastard at Rubicon?

I'm pretty keen for Kilnsey, not sure what yet… I'd like to start by finishing off Grooved Arete from last year and then see what tickles my fancy. I may have to move up there at this rate! I felt the moves briefly on Kaabah last year and was pretty grossed out by the tiny crimps near the top. Maybe I judged it too quickly though...

Thanks then to Mina for sharing her thoughts. We're psyched for Mina as she continues her quest to add more and more hard routes to her growing CV.

Thanks also to Jordan Manley for the use of his image of Mina on Bat Route.