A week ago Ethan Pringle got the coveted second ascent of Jumbo Love (5.15b/F9b), Chris Sharma’s 75m mega line at Clarke Mountain, California. Pringle’s ascent is not only significant on several fronts but it represents an amazing personal journey. 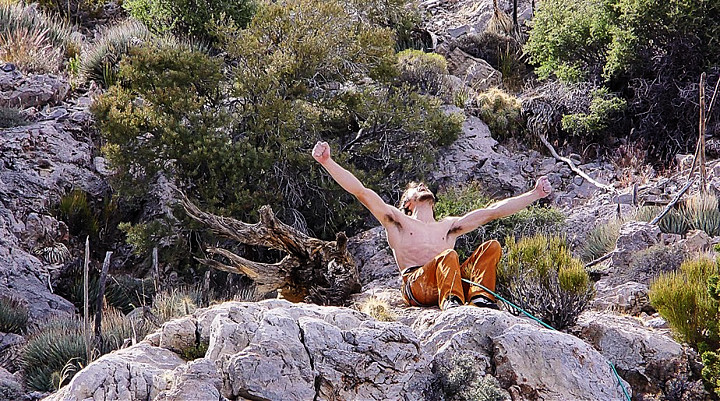 Generally considered to be the hardest sport climb in North America, Jumbo Love was first climbed by Chris Sharma back in 2008. Climbed seven years after Sharma did Realisation (F9a+) at Ceuse, Jumbo Love was not only Sharma’s hardest route at that time but it was one of the hardest routes in the world. Jumbo Love was first bolted by Randy Leavitt during the development at Clarke Mountain. It attracted attention from some of America’s best climbers including Ethan Pringle, Chris Linder as well as Chris Sharma. Sharma finally redpointed Jumbo Love in 2008 after an extended period of working the route.

In what has clearly been an extended project, Ethan Pringle finally topped-out on the second ascent of Jumbo Love on Saturday May 17th – some eight years after starting work on the the mega pitch. Writing on Facebook after his ascent Pringle said; “WOW!!! Yesterday I climbed my ultimate lifetime dream route, the most bad-ass sport climb I’ve ever laid eyes on, Chris Sharma's â€ª#‎JumboLove! WOW. I can’t believe it’s over. I say that half in a literal sense because when I sent it, it was almost like an out of body experience that I can barely remember happening.” 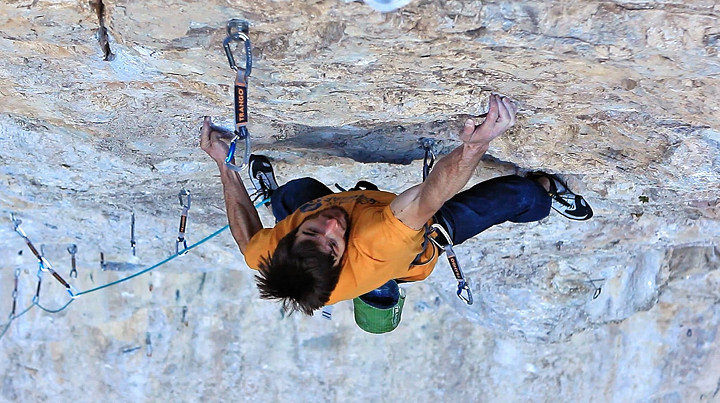 Having climbed Jumbo Love, Pringle becomes the second American to climb 5.15b/F9b and one of only nine other climbers (we believe…) to have climbed that grade or harder worldwide. It’s perhaps not surprising that Pringle, a native Californian, got the second ascent of Jumbo Love – the remote location and extreme length of the climb on Clarke Mountain meaning perhaps that another US-resident had a home advantage.

Pringle’s ascent hasn’t come without a massive effort on his part however nor without more than a degree of mental angst. Every climber who has (finally) closed out a long term project at or about their personal limit has to overcome not only the rock but also the mental anguish that comes with staring failure in the face! Often it is overcoming the latter that is more significant that the former. Pringle added on FB; “My story on Jumbo Love spanned over eight years and involved every emotion I can think of: awe, excitement, love, admiration, longing, apathy, fear, frustration, anger, resignation, acceptance, and eventually, MOTHER…… GLORY!!!”

He’s clearly very satisfied (stoked in the US vernacular…) about his ascent of Jumbo Love; rightly too and who else wouldn’t be; “What I’m left with is the pride of overcoming all the negatives, and a lot more faith in myself and my process.” Pringle describes the joy of getting through the redpoint crux for the first time and realising that an ascent is (finally) on the cards; “The true moment of triumph came one week ago when I proved my own doubt wrong and stuck the red-point crux from the ground for the first time. Sticking that move surprised me so much that I freaked out and let go of the wall, but it was then that I bridged that mental gap between what’s possible and what’s inevitable. I realized I was capable of climbing the route NOW. When I let go of all that doubt I cried tears of joy for a solid five minutes. That was the true celebration, that realization that I was worthy, then and there.”

But as with all ‘at the limit ascents’ Pringle’s journey still wasn’t over; “Of course it can be hard to keep doubt at bay forever and I still had a few more mental hurdles to overcome, but I held onto the belief of what was possible and knew deep down it was only a matter of time. Fortunately I had endless support from my girlfriend Georgie and from everyone around me who always believed I could do it and encouraged me to try again when my monster of doubt reared its ugly head.”

And then finally with the second ascent of Jumbo Love in the bag he can relax; “I can’t thank those people enough for their tireless support and their unwavering belief. I couldn’t have done it without you.”

Previously Pringle has done a number of international test-pieces – not least the fifth ascent in 2007 of Chris Sharma’s Ceüse monster Realisation (F9a+) as well as Cobra Crack (5.14b), the heinous finger crack in Squamish. Earlier this year Pringle climbed the endurance monster, La Reina Mora (5.14d) at Siurana.

Since his Jumbo Love ascent Pringle has given an extensive interview with DPM (Dead Point Magazine) in which he gives more details on the trials and tribulations of his ascent. Click through here to read the excellent full-length interview with Ethan.

The RV Project have been on hand filming Pringle’s attempts on Jumbo Love. A film is expected in the future.