Eternal Flame gets two free ascents in a week!

Eternal Flame, Trango Tower has received two free ascents in the last week; firstly by Edu Marin, his brother Alex and dad Franciso and secondly by Babsi Zangerl and Jacopo Larcher. Remarkably, Zangerl and Larcher climbed it no-falls in a continuous six-day push! 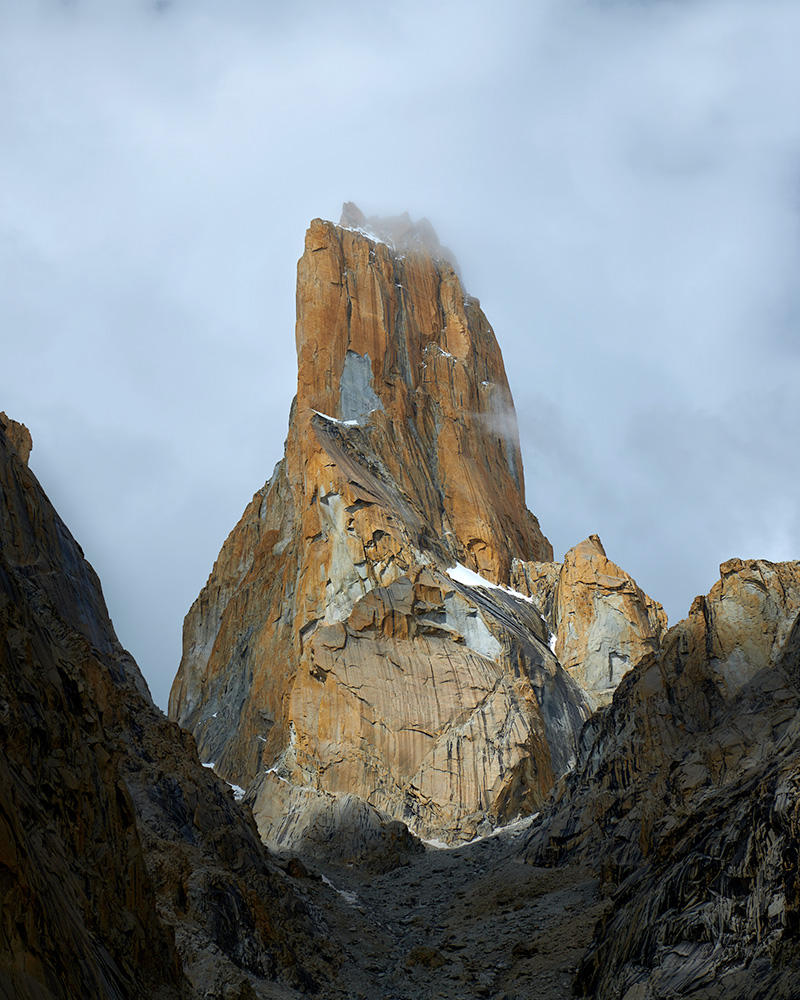 Whilst both teams eventually had good weather for their actual ascents poor weather had previously threatened their efforts. Both teams had in fact first set foot on the route the year before but had to abandon their attempts in the face on ongoing bad weather, something which is not uncommon in the area.

After working the route and free climbing all but two pitches, Spanish climber Edu Marin had to walk away last year leaving unfinished business; especially frustrating given he had even stood on the summit during his time on Trango! Having come very close to success in 2021 Edu was back again this year straight after the Petzl Rock Trip to Manikia. Climbing with his bother Alex and his dad Francisco “Novato”, they started out on June 24th. 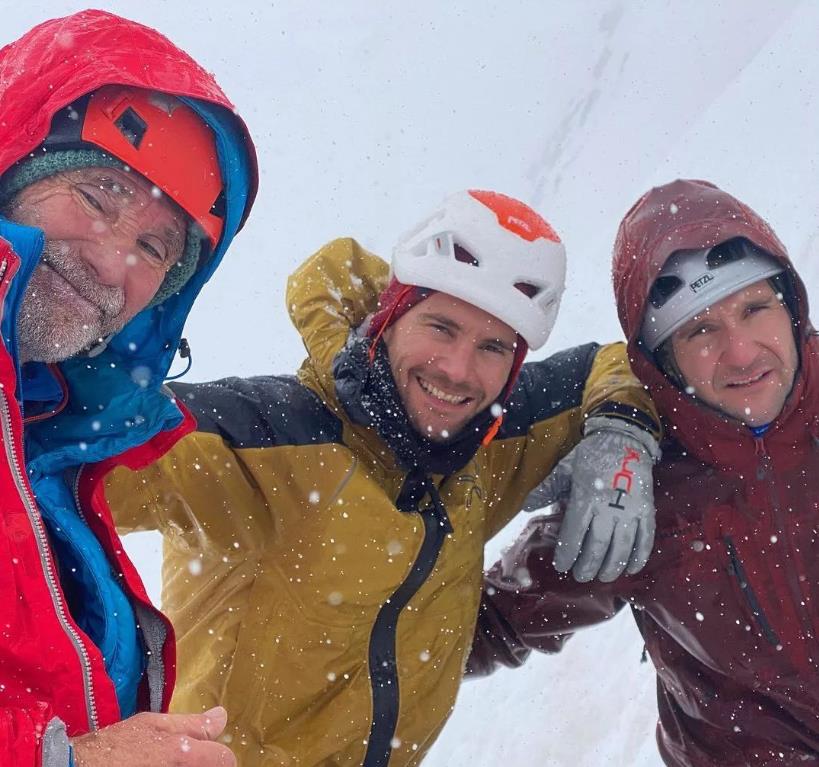 By June 30th they had fixed ropes up to the Snow ledge at 6000m after which they began the hard free climbing above. However, bad weather rolled in by July 4th and whilst Alex and Novato descended back to base camp, Edu remained alone on the wall determined to keep the posibility of completing 'a continuous push' ascent alive.

Eventually, the weather improved and on July 16th, Alex and Novato having rejoined Edu once again at the Snow Ledge. Once again, Edu began the hard free climbing. Dispatched the crux F7c+ pitch the Marin's summited the day after on July 20th. Two remaining easy pitches, a F7a and a F7b, were climbed during the descent. Team Marin eventually regained their base camp on July 24th.

A jubilant Edu posted about his success on-line saying:
“We sent it!!! We have done the first free climbing repetition of Eternal Flame. I have spent 28 days on the wall and I have sent it in a single push. Maybe I am the first climber who has lead all the pitches free climbing the route. I am eternally grateful to my father and my brother. Without them this dream would have not have been possible. They have fought to the end. Being the three together at the top of the Nameless Tower has been incredible. We have been able to shoot and document the entire ascent, so soon you can watch the movie. Thanks to the Montura team on the wall. It is time to go home. I am exhausted but happy Eternal Flame is the beginning of a new path for me. More info coming soon! ”

Team Marin had no sooner cleared the mountain when it was Babsi Zangerl and Jacopo Larcher’s turn to stand on top of the Trango Tower. Having completed their own ascent, they topped out on July 23rd – the day before the Marin’s arrived back at base camp. Whereas Team Marin were back in action after the bad weather on July 16th Babsi and Jacopo didn’t start their attempt until July 18th. Spending a total of six days on the Tower, Babsi and Jacapo made steady but slow progress up the wall. On day two, three and four the pair made limited progress as the warm sun had melted the snow and the rock was wet. Day five however was better and the pair accelerated up the wall leaving only three easy pitches to climb on their sixth and final day. Although Babsi and Jacopo swung leads on the easier pitches they both led the four hard pitches on which they encountered F7c to F7c+ difficulties. Remarkable however, Babsi and Jacopo not only climbed the route in one continuous, ground-up push they also climbed all the pitches without taking any falls. Babsi and Jacopo had previously climbed (on-sight) the first two pitches in 2021 before bad weather prevented them going any higher on the route. 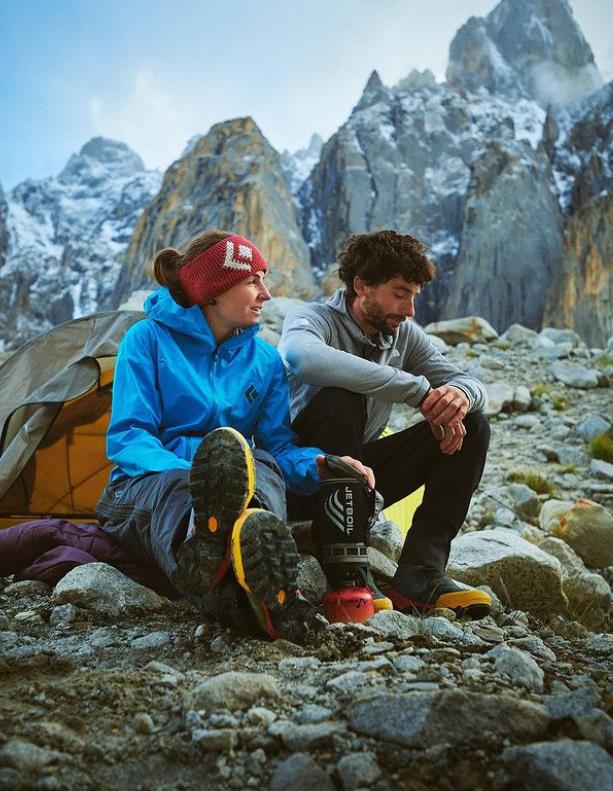 Like Edu before them Babsi and Jacopo also commented on the quality of the route saying: “Eternal Flame – A Dream came true! An incredible line through the stunning 6240m high Trango Tower. A sequence of 5 star pitches which we’ve rarely seen before, with the crux pitch being above 6000m. What a journey! We are both exhausted and baked by the sun, but we’re super happy to have climbed this iconic line, without any falls. Now it’s time to recover in Basecamp and enjoy our last days in this beautiful country. Big congrats to Edu, for also realising his dream!"

Eternal Flame was originally climbed by Kurt Albert, Wolfgang Güllich, Christof Stiegler, Milan Sykora in September 1989 and graded V1, 7b+, A2. The aid has been slowly whittled down by various parties. Denis Burdet, Nicolas Zambretti and Toni Arbones made a significant contribution in 2003 by freeing two of the four aid pitches. Two years later in 2005, Spanish brothers Iker and Eneko Pou found an F8a variation to the crucial 10th pitch before having to bail-out in the face of deteriorating weather. The first free ascent was however finally made in 2009 by the Bavarian climbers Thomas and Alex Huber. The key to the Huber Brothers success came when they found a F7c+ crack system farther right than the variation that the Pou Brothers explored. Following their successful ascent they described Eternal Flame as “the best and most beautiful free climb on the globe.”