Tim Emmett and Klemen Premrl have successfully completed their latest project at Helmcken Falls in Canada to give Mission to Mars; the first climb ever to be given the grade of WI 13. 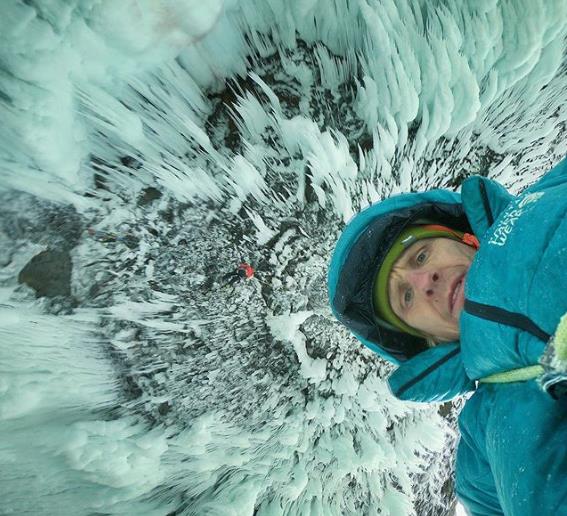 A decade since first discovering the incredible Helmcken Falls in Canada with Will Gadd, Tim Emmett has returned once again with Slovenian Ice Master Klemen Premrl. Previously, Emmett and Premrl added Interstellar Spice (WI 12) in 2016.

After arriving early February Emmett and Permrl were soon into the swing of things adding Nadurra Durra on February 5th. Tim posted about their new line; ‘It’s not as long as Interstellar Spice but much steeper with powerful climbing, the hardest part, right at the end.’

Tim said this about the climbing; ‘Sometimes the ice is so thin, I can’t believe I’m still hanging all my body weight off some frozen spray the width of my little finger! Sometimes it’s not so strong and breaks. The trick is finding and using the ones that don’t.’

However, Emmett and Premrl didn’t finish at that; their attention shifted to a four-bolt extension to Nadurra Durra. Four days and numerous attempts later, both Emmett and Premrl were finally able to lead Mission to Mars WI 13.

Tim described the overall line; ‘Mission to Mars WI 13 is a natural 40m ice climb through increasing steepness with the crux being the last 3 moves.’ And just to get the steepness of it Tim clarifies; ‘Of all the ice climbs at Helmcken this is the steepest and overhangs approximately 30m.’ It’s the first climb at the suggested WI 13 grade which prompted Tim to comment; ‘This is the first climb at this suggested grade. I really hope someone goes in there in the next few weeks to try it, it’s waiting for you?? Go for it ?’

Tim is well-known for projecting hard and it's good to see him topping out after something of a barren period as he says in his latest post; ‘After spending the last 18 months training harder than ever before and getting shut down by pretty much every project I focused on including Vietnam, Frontside, Era Vella and Everest, it felt so good to finally get to the top of something worthwhile! Mission to Mars is definitely something I’ll remember for a long time.’