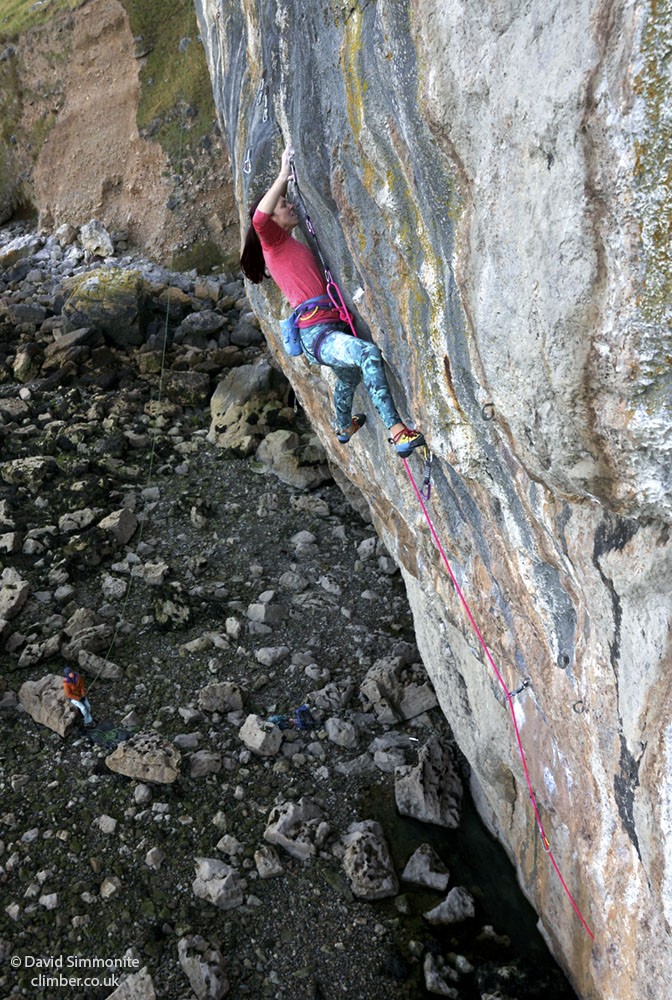 Emma Twyford on The Big Bang last Friday during one of her final attempts before repointing it earlier this week. Photo David Simmonite/Climber

Emma’s repeat of The Big Bang is hugely significant on two fronts; it’s only the third ascent that the route has ever had since Neil Carson did the first ascent back in 1996 – plus it’s the first time a British women has climbed an F9a-graded route whether at home or overseas.

As one of the very best British female climbers Emma regularly makes the headlines with her climbing. Based in North Wales and working as a route-setter, a coach and a brand ambassador, Emma is a massively accomplished sport and trad climber. Emma first pushed into the higher grades earlier in the decade with ascents of Monopoly E7 6b at Millstone and Call of Nature F8a at Raven Tor. However, by mid-summer 2011 Emma had stepped up her game with an impressive on-sight ascent of Statement of Youth F8a at Pen Trwyn before going on to repeat Unjustified (F8b+) at Malham (2014) and Mind Control (F8c) at Oliano in 2018. Whilst pushing her sport climbing Emma has also notched a world-class trad CV which includes flashes of routes such as Bucket Dynasty E7 6b on Dove Crag (2014) and Gravity Wave E8 6c, Trearddur Bay (2016) and repeats of no less than three E9’s; Rare Lichen at Gribin Facet (2013) as well as Once Upon a Time in the South West at Dyer's Lookout and The Big Issue at Bosherton Head both of which she climbed in 2018.

So, the third ascent of The Big Bang; how does that feel?

Pretty special but also very weird! To know it has been climbed so few times makes it feel even better because it isn’t a trade route 9a (there are so many strong climbers now climbing at this level or harder), probably because of its style and location.

When did you first start on The Big Bang and what was it that appealed to you?

I first had a look in 2017 but could barely do the crux moves, if I did a move it was maybe 1 in 10 goes. I wasn’t good enough so I walked away and started doing my homework and some base level training! The route has so much history as it used to be the first 9a in the UK. It mostly suited my style and on a practical level it was close to home. I was drawn to the line and the personal challenge of finding my limits.

How did your first few sessions go on The Big Bang and what impression did you get??

It didn’t go well to start with but I went in expecting that because it is 9a. I thought the crux was bloody nails even with crimps. As I said, I walked away in 2017 and went back in 2018, interested to see if the training had paid off over the winter. It had, to my surprise I made the crucial link from the pocket to the top and through the crux. At this point I knew the route was possible.

What adjustments have you made to your climbing/training that have been related to The Big Bang?

This has been really tricky for me! I’ve had to be a geek and look at tide charts almost a year in advance so I could book route setting around the good tide times. Sometimes though I would be too tired after a hard week of setting, I’ve been pushing my poor body so hard between this project and route setting that at the beginning of this year it broke. I made the decision to take the financial hit and put the route first, just taking the bare minimum of work if I could.

For me, route setting is still my primary training because it is too physically demanding to do much else. Though I did get smarter with core workouts and the occasional session of weighted pull ups, I figured I could do core even if I was setting.

At home or if the weather was bad I was doing finger boarding with a sequence of grips specific to the route but adding no more than 10kg max to my body weight on the Beastmaker. I was doing 5 on 2 off but with no rest on the ground, using a chair for bad feet and shaking out on good holds as my rest.

Was it a deliberate policy to get stuck into a local project rather than one two hours’ drive or more away?

I do so much driving for route setting (minimum of 5 hour drives) that I couldn’t face driving far for a project, I made that decision after climbing Unjustified at Malham that it was just too much when trying to work on the road too. So the decision was very deliberate.

What was worse, managing work to give you sufficient free time to try The Big Bang or the tidal access and/or notoriously fickle connies at LPT?

I think both could be bad at times! When I knew I was close it would be frustrating to just be too tired and getting powered out from all the setting. I would fail at the beginning of the crux on those days and that is when it annoyed me because I knew I could get higher normally. Equally playing the patience game with tides and good conditions could be hard, I could have one go where it felt amazing and then the next would be awful and I’d be fighting not to slide off. You just can’t be fighting to get to the crux it wastes too much energy!

You’re well-known for being tenacious and determined; would you say these have been your biggest allies in your The Big Bang campaign?

I’m not a Taurus for nothing! Sometimes I would question myself on the route, I knew I could do it so the battle boiled down to being a mental one and getting nervous on the crux. The important thing for me was to take positives away from each session, even if it was a micro improvement. That was challenging sometimes when you fall beneath your high point. I didn’t want to give up having come so close at the end of last year and I think determination or just being bloody minded saw me through the tough times on this route!

When Climber looked at First Female Ascents (Nov – Dec 2018) you commented that you like to inspire other women to push their boundaries regardless of grade but that you were more interested in getting an early repeat of a route regardless of gender.  Your ascent of The Big Bang does both and that has to be hugely inspirational all round – right?

I think so! For me I really hope this inspires anyone not to give up, even if it is a pipe dream if you put the hard work in you can push your limits further and make them a reality. For me, I think getting the 3rd ascent of this route in general means so much more.

Why do you think that that The Big Bang has had so little attention over the years?

It’s had some attention in the past from people like Ben Moon and Pete Robins but the top crux is pretty sharp. You only ever get 2 good goes before your skin is trashed, throw in tides and then fickle conditions and I imagine it becomes a lot less appealing to people especially with classic hard routes at Malham and Kilnsey that are easier to access.

Rachel Farmer became the first British women to climb F8a with her ascent of Raindogs at Malham. Your ascent of The Big Bang has taken British female climbing to a new level. Can you see others doing likewise in the near future?

Although I never met Rachel she was one of my big inspirations as a teenager, I got her book Face Dancing at my first ever comp. I really hope so, there are many strong British female climbers out there who are capable of climbing this hard much quicker. But I guess it has to start somewhere with someone getting the ball rolling!

You did your first F8a, Call of Nature at Raven Tor in 2010. Nine years later, you’ve done F9a. What’s next for you in sport climbing?

I’m not sure just yet, consolidate a bit more I guess. Maybe try and push it further if I can though that would maybe mean going abroad or to Malham. But I’m psyched to do more trad and alpine stuff next year, I love to keep the variety if I can because to me that is what keeps it interesting and keeps my passion for climbing going strong!