Nearly twelve months after her previous accident, Emily Harrington has returned to El Cap and climbed Golden Gate (5.13) in 21:13hrs. 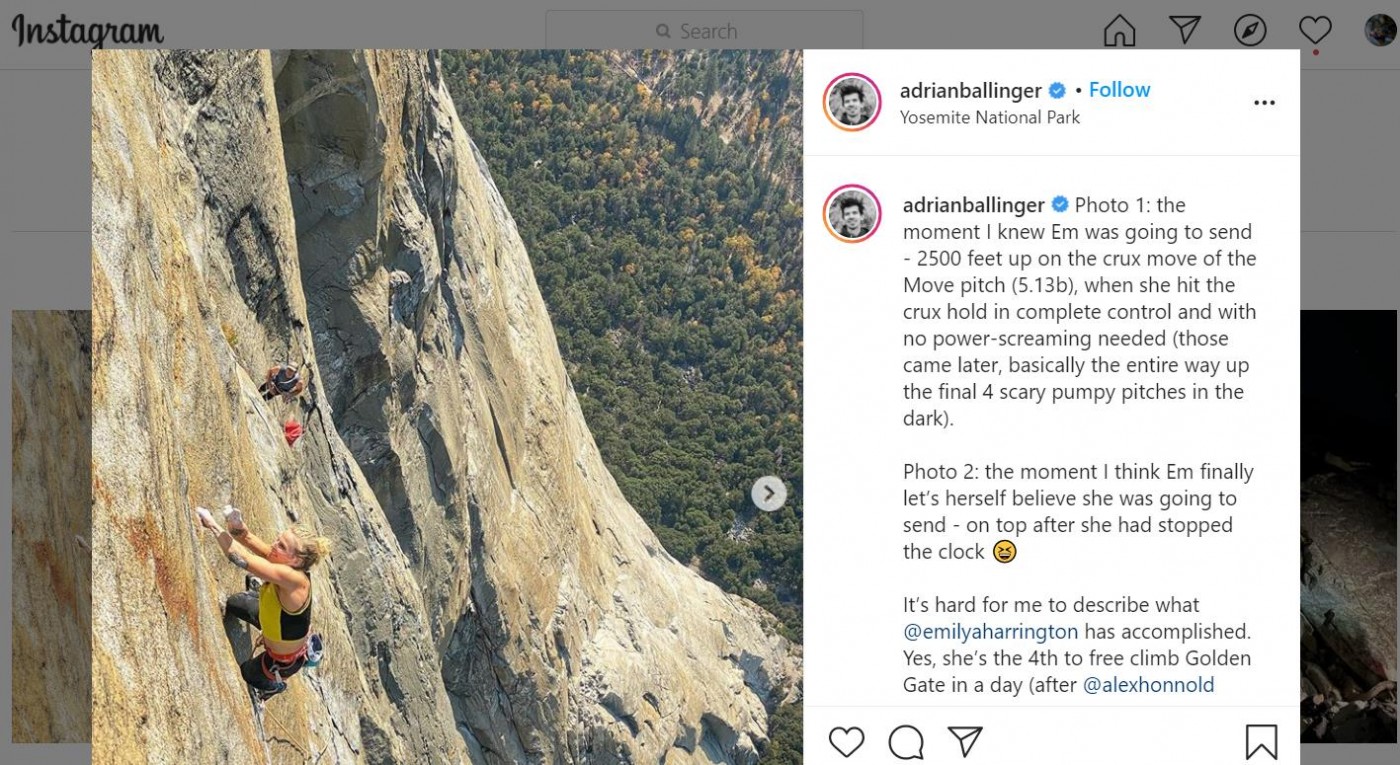 Back in 2015 Emily Harrington free climbed Golden Gate in a six-day push. It was, as Emily said; “one of the proudest achievements in my climbing career”. What is interesting is that Harrington – a former competition climber – had topped Everest just three years previously; understandably, her ascent of Golden Gate was a proud moment for her.

Harrington’s work on Golden Gate wasn’t over however; the fabled 'in-a-day' ascent was beckoning.  Early in November 2019 Harrington got very close to succeeding; ultimately she was stopped by the last hard pitch close to the top. Later that month, she pitched for another attempt on a sub-24-hour ascent; sadly though, it didn’t go according to plan. In an effort to save time Emily and her climbing partner, Alex Honnold were simul-climbing when she slipped low down on the route and took a nasty fall. Exactly what happened in that fall was covered at some length in a Vlog by Emily and her husband Adrian Ballinger. Having been recovered by the Yosemite Search and Rescue, Emily was taken to hospital for treatment. Fortunately, and despite looking pretty serious initially, she was released from the hospital the following day.

Earlier this autumn Emily returned to Golden Gate to start the process again. Once again supported by Alex Honnold, Emily Harrington started at 1:34 am the pair climbed safely past the point at which she fell last year and continued. Things however did go according to plan and once again Emily took a fall – this time ripping a deep cut in her forehead! Rock and Ice Magazine (here) report that Emily’s was off the Golden Desert – one of the 5.13 pitches. This time, Harrington was able to continue onwards finally stopping the clock in 21hrs 13mins and 52secs. Emily’s ascent of Golden Gate makes her the fourth person – and the first women - to climb it in sub 24 hours.

Originally, climbed by the Huber Brothers in 2000 the 41-pitch route Golden Gate is one of the harder free routes on El Cap. Previously, Golden Gate has only been free-climbed in-a-day by the legendary team of Tommy Cauldwell, Alex Honnold and Bob Gobright.

Finally, watch a video of Emily’s 2015 ascent below…