Dawid Skoczylas has had an impressive month over at  Impossible Roof sending firstly Serenade (Font 8b) and then Serendipity (Font 8b+). 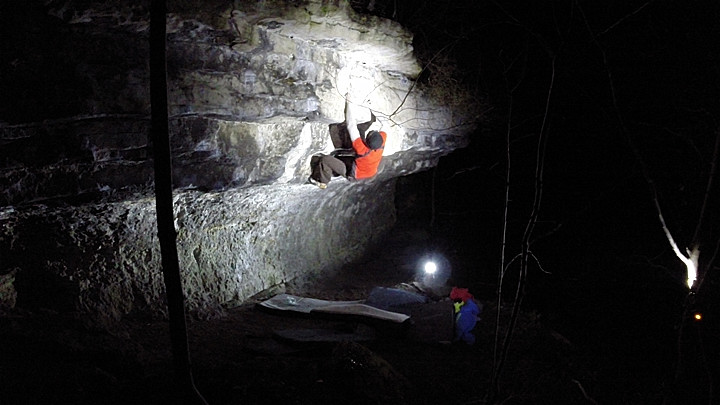 Impossible Roof is rapidly becoming the place to be seen – largely thanks to the efforts of Mike Adams who has made the place his own with a string of hard blocs. We reported in February that Mike had just done the first ascent of Serenata  (Font 8c) – click through here to see that report.

Dawid, or Polish Dave as he’s known to many, has made it his life’s work to put up hard new blocs or to repeat as many of the Peak’s hard blocs as possible – not that Impossible Roof is in the Peak but you get the drift - hopefully. Skoczylas has been a regular player around the Peak now for over a decade and often climbing with Robin Muller he has amassed a considerable tick list which also includes blocs like James Pearson’s Keen Roof (Font 8b) at Raven Tor and John Gaskins’s Walk Away (Font 8b) at Fairy Steps. His ascents of Serenade and Serendipty however are however, some of his hardest to date.

To give you an idea of how keen Dawid is we’ve ‘seen’ him walking into Stanage at 22:00 in the depth of winter just as we were leaving and heading home to a warm, coxy bed. Make no mistake; Dawid is committed to his climbing. And that dedication has paid off – not least with repeats of Serenade and Serendipity. Typical of the man though are Dawid’s comments which he made to CLIMBER; “In terms of the climbs I can only say that Serendipity is very valued by me as for the personal journey it took me on. As for the grade I feel unqualified to say and it is only the third ascent and will need more repeats to really say. It is only one of many fine lines that Mike Adams discovered.”

To see more of Dawid’s bouldering click through here  to check out the vimeo feed which Dawid shares with Robin Muller. The video of Dawid on Andronicus (Font 8a+) in Tom’s Cave at Stoney is well worth watching to see how hard Dawid fights for his ticks.