Dave Pegg has passed away

Very sad news coming from America is that Dave Pegg has died.

Born in Morley, West Yorkshire in 1967, Dave Pegg was an extremely active climber on the Pennine scene back in the 80/90's. As well as repeating many of the hard routes of the day he also climbed many new routes on both the grit and limestone including MaDMAn (E8) at Widdop, Heartbeat Cty (E8) at Rylestone, Three Blind Mice (E7) at Burbage and First and Last and Always (E7) on Esk Buttress in the Lakes.

Following a period in Sheffield to study maths he moved back to Leeds and then over to the States in 1996 where he became a senior associated editor on Climbing Magazine. In 2002 Dave Pegg formed the successful Wolverine Publishing and went on to produce many geat climbing guides including one to his 'second home', Rifle.

Our condolences to his wife Fiona, family and friends. An obituary will appear in Climber magazine. 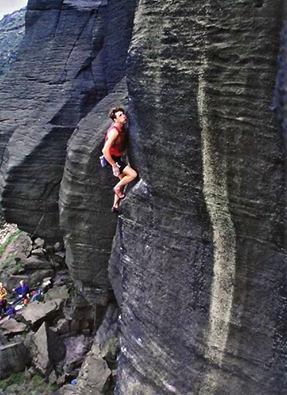 Dave Pegg on the first ascent of MaDMAn (E8 6b) on Wimberry in 1994. Photo David Simmonite