Battling through knee-deep snow to get there, Dave Mason has repeated The Ace (Font 8b), Jerry Moffatt’s Stanage Plantation test-piece.

The Ace was one of the hardest problems in the country when Jerry Moffatt did the first ascent in 2001. A sit start to his earlier and easier problem, The Joker (Font 8a), The Ace was Moffatt’s bouldering swan-song. Nearly 15 years on, only Ben Moon’s Voyager Sit Start (Font 8b+) and Thomas Willenberg’s Brad Pit Sit Start (Font 8b) are harder than The Ace on Peak grit. 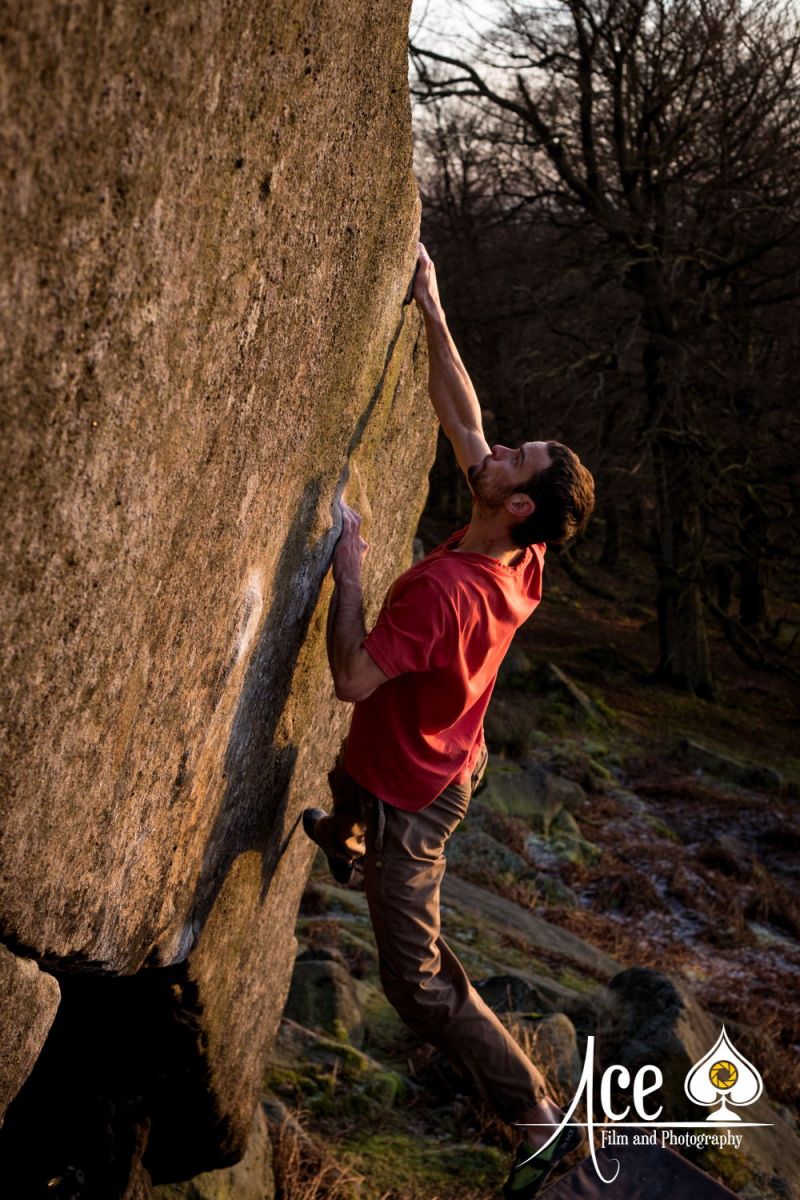 Dave Mason’s ascent, thought to be the 10th, is the first repeat for a couple of years despite there being a long list of suitors many of whom are thought to be close to success. Mason joins a star-studded list – a who’s who of UK bouldering – which includes Malc Smith (2nd), Ben Moon (3rd), Tyler Landman (4th), Andy Earl (5th), Stuart Watson (7th), Ned Feehally (8th) and Tom Newman (9th). Only Paul Robinson from the US is the sole overseas boulderer to get the tick – or so we think.

We’ve been in touch with Dave to get the low-down on his ascent. As you might imagine it’s clear that Dave’s interest is way more than just the grade;  “I have always wanted to do The Ace; the history, the situation, the power and subtlety required make it a truly great boulder problem. I had tried it once in the past but left with my tail between my legs and a very bloody fingertip!”

Dave is well-known for his bouldering trip abroad and his hard repeats elsewhere. However, The Ace was clearly a major target for this winter; “This year after returning from the States I was determined to get on the grit as much as the weather would allow. I find gritstone hard to climb on and for this reason I really love working a problem and getting to the top. It has always been a goal of mine to climb to my current standard on limestone, gritstone, granite and sandstone. The gritstone 8B has been the missing link for a few years now and so climbing The Ace felt really good.”

However, this winter hasn’t been plain sailing on account of the snow. As well as the snow Dave also had other problems to contend with as well; “I went to try it in early January but due to a left knee injury I couldn't do the second move. Instead I decided to try The Joker in the hope that in the weeks to come my knee would heal and I could try the big one! After a good few attempts I stuck the lip and held the swing; the first piece of the jigsaw was in place. A few weeks later I was back at Stanage on a particularly windy day and decided to have another go. This time my knee felt ok and with a bit of luck I would have done The Ace there and then, but lady luck wasn't on my side this time, or in fact, the next session I had on it. I had a good handful of the finishing jug on both occasions but the violent swing had sent me on my merry way.

The snow came and melted, and came and melted, and then came and didn't melt - but you couldn't get to Stanage! After a rest week the BIFF came round and after a great night I was feeling the rewards of my time off. The following day I went to Rowtor with friends and planned an attack on Stanage for the Monday.”

“I woke up feeling tired but after warming up in the cellar I felt bouncy and light. The Ace was on. I parked at Popular End and trudged two pads through knee deep snow to a deserted Stanage Plantation. The conditions felt good and I was pretty keen! After a few goes to warm up I had a heartbreakingly close attempt where I held the in swing only for my shoulder to do a funny shrug, which opened my grip on the jug and put me back on the floor! Ten or so goes later and I couldn't do the middle move again, with frustration rising I took a break and had some magic Haribo! The following go I stuck the second move and then stuck the jug, I held the out swing, the in swing and matched with a roar of delight! Never has a boulder problem felt so satisfying!

Thanks to Archie Cameron Blackie for the image of Dave. To see more photos from Archie click through here...