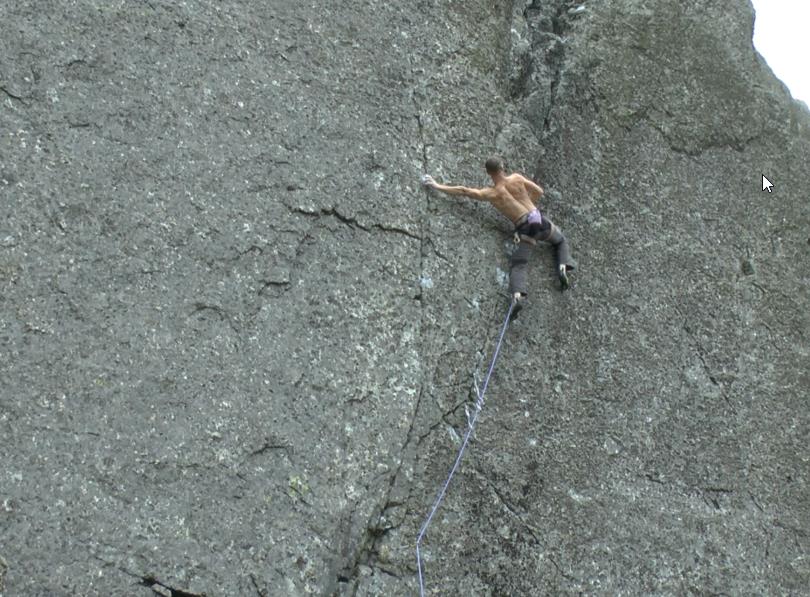 Craig Matheson on Welcome to the Cruel World

Taking the thin overhanging crackline right of Borderline on East Buttress, Welcome to the Cruel World is a contender for the hardest mountain route in England. Craig Matheson is no stranger to hard climbing in the Lakes; it’s a area which he is passion about.

CLIMBER have been in touch with Craig for the low-down…

Can you tell us bit about the route

For those who’ve had the pleasure of walking to Scafell from the southern lakes the view is dominated by the East Buttress of Scafell. It’s a huge expanse of rock, but for a climber, the eyes are naturally drawn to two distinct features; a huge rightward trending overlap in the centre of the buttress and a crack system to the right.

As you venture further up the southern slopes of Scafell, what looked like a pleasant vertical buttress starts to take a menacing barrel like shape. The lower wall becomes a holdless clean sheet of grossly overhanging rock and a glance at the guidebook reveals that the easiest route on this face is Borderline E7 6c (Sowden/Berzins 1986)! The huge overlap is taken by Another Lonely Day E8 6c (Birkett 2002), with the crack being Welcome to the Cruel World E9 7a (Birkett 2002). The only other route to breach this face is Return of the King E9 6c (Birkett 2006). Take your pick, but all carry ferocious reputations.

What attracted you to Welcome?

For me, the choice of route was easy. Of all the guidebook photos I had ever seen, there was one that filled me with both inspiration and dread in equal measure. The photo was that of Dave Birkett on the crux of ‘Welcome to the Cruel World’ (p127 2014 FRCC guide). I would stare at that photo and imagine myself in Birkett’s shoes, powering to victory on those ‘single finger tip jams’, doing ‘the hardest moves on any mountain crag in England’ (p126 2014 FRCC guide). Wow!

Did you have to do much cleaning before climbing it?

Being a crack system the route does suffer from seepage and I would be lying if moss and lichen had not found their way onto it. Lets face it, this is the Lakes, moss comes as standard, so some brushing was needed.

Tell us about the climbing please?

The climbing is dynamic, powerful and generally unfriendly to the fingers, but the situation of the route and the magical Scafell environment reward with more than the route could ever take.

The route itself starts with some long pulls, these are designed solely to wear the arms out prior to the real fun commencing. Good gear is reached and is needed for what lies above. The cracks close up and all that is left are pathetic sloping slots that take a finger-tip or two. The footholds disappear, just dinks on a wall, they’re all terrible, so use whichever ones you want/can/think you might be able to. The moves become explosive with nothing to hold and nothing to go to, but there is a glimmer of hope high up on your left. The hope turns to despair it’s a sloping single finger-tip jam which enjoys nothing more than tearing your skin as you strain to keep contact with the rock. It’s partner to the right another single finger-tip jam, or a very long reach for a sidehold way, way above. Whichever choice you make, the final move will be with you for a long time - this is Welcome to the Cruel World.

Can you tell us about your various attempts as well as your final ascent?

I had been up in late June and came very close. I was devastated as I’d had that ‘I’ve done it moment’ only to find my arms had other ideas. I knew that the route was on, but I didn’t get the opportunity to return until early September. I sent the route on the 3rd try of the day. I’ve found over the years that my 3rd attempt tends to be my most successful.

This is a tough question. The routes on Scafell have their own challenges – it’s a long walk and the weather is typically wetter than other Lakes areas. Any ascent on Scafell is a major effort and this is shared by every climber whatever grade you climb – you need to be committed to your route.

In terms of difficulty its E9 7a with f8b+ climbing, so it’s no surprise that Welcome to the Cruel World has the most technical and intense climbing on Scafell. But if this is the route you’ve come for, you’ve committed to, you want it to be a hard fight. After all this is what the 3* routes are about, they create the memories and stir the feelings, otherwise they default to being ‘just another tick in the guide’.

And finally, the big question, is it the hardest mountain route in England?

Well, probably, I can’t think of one harder.