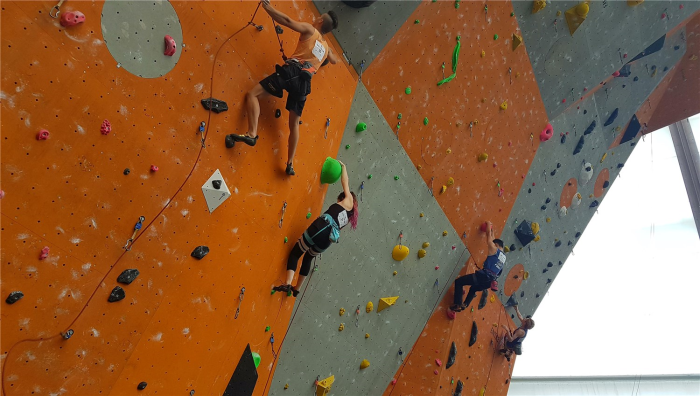 The Scottish Youth Climbing Championship at EICA Ratho saw almost 150 climbers taking part in tests of skill and speed on vertical and overhanging walls. At the same time over 30 people took part in the ParaClimb Scotland event, where they overcame a range of disabilities to climb technically challenging routes.

Jamie Smith, ClimbScotland Team Leader, said: “This was an awesome event to behold! Every time I attend these events, I’m blown away by the standard of climbing in all the age groups. What gets me more though is the support all the young climbers give one another, including those they are in direct competition with. I have never seen this in any other sport and acts as a reminder to one of the many reason I, along with many others, love this sport. To think that there may be some young climbers who took part this weekend who may go on to represent team GB at the next Olympics is incredible!  I would like to say a massive well done to all who took part and also to all the volunteers who made the day possible.”

In the SYCC almost 120 contestants vied to overcome technical climbs, either leading or on a top rope depending on their age category, ascending routes of increasing difficulty.

The speed climbing championships have been likened to the 100-metre sprint of the climbing world, with climbers racing up identical routes on an 18-metre overhanging wall, each trying to get the shortest time. This year 70 contestants took part, with the fastest time 11.24 seconds, by Scots climber Angus Davidson. There was also a highly popular mini-speed competition, where young climbers too small for the regulation speed course were able to get a taster of competing against the clock.

Nearly £700 worth of prizes across the three competitions were donated by Tiso.

Mountaineering Scotland Sport Development Officer Kevin Howett said: “This is a great piece of generosity from Tiso, and it will be good to give that extra bit of reward to climbers for all their hard work and training.”

Bruce Hay, manager of Tiso’s Perth Outdoor Experience store, said: “Climbing is part of the Tiso DNA and we're delighted to be providing the prizes for this competition. Climb Scotland is doing incredible work, encouraging and developing the next generation of participants. It’s a pleasure to be involved.”

Results of ParaClimb Scotland, which was also the first round of the British Para Climbing Series, can be seen on the Mountaineering Scotland website here