Claire Buhrfeind takes the Double at US Lead and Speed Championships

The recent US Lead and Speed championships saw Olympic hopefuls flexing their muscles with national titles, possible doubles as well as USA team places up for grabs.

Sean Bailey fridge-hugging his way to the high point and ultimately winning the men’s final.

The championship saw, as is becoming usual, the majority of the lead wall festooned in volumes of every shape, size and hue. The setters threw a hand-full of dirty rat-crimps in here and there as well to test the competitors on some old-skool gnarl – just when they were likely to be totally boxed from hanging slopey volumes! There was a number of interesting aspects to the championships however although with the Olympics coming ever-closer. 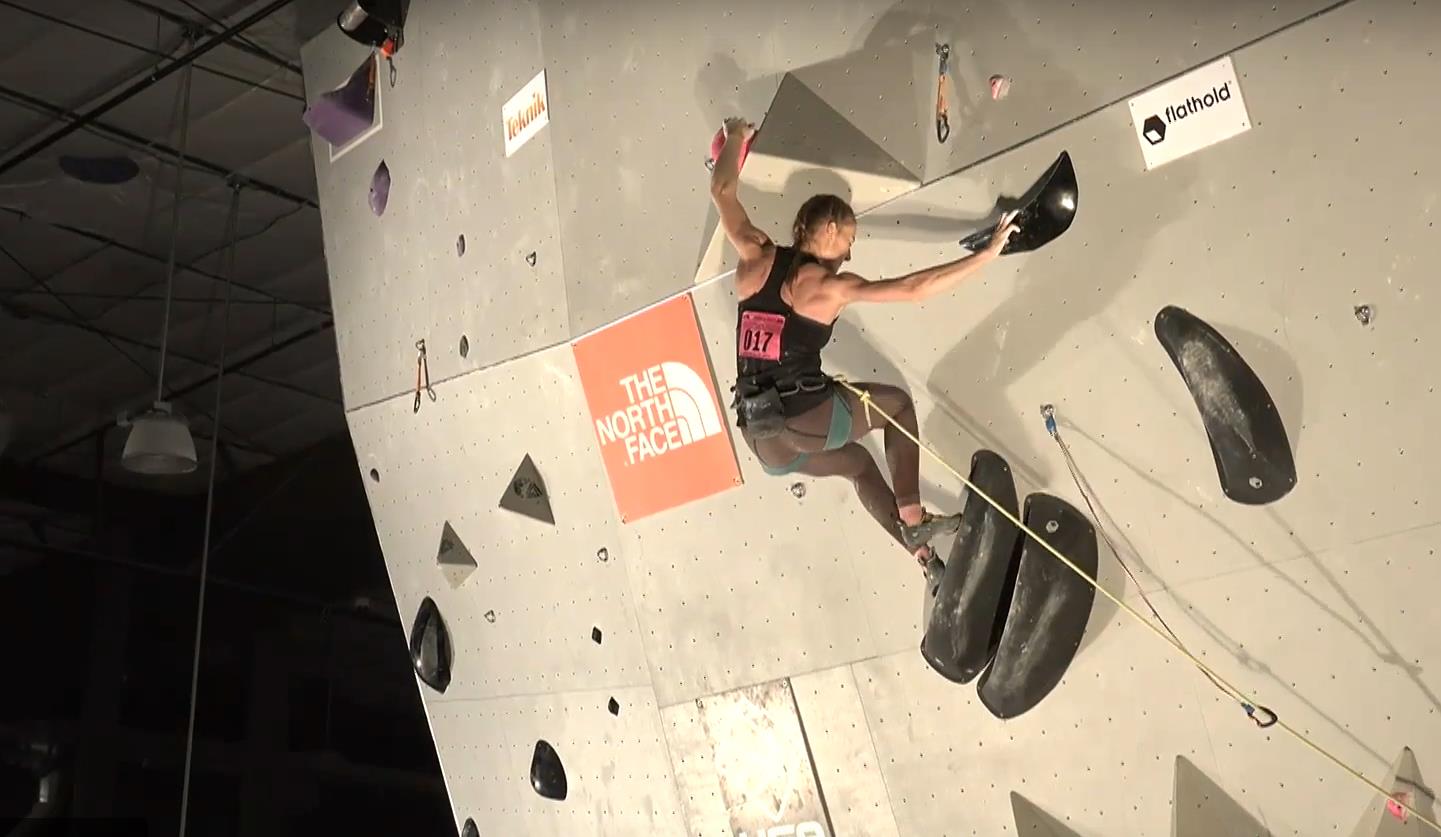 Claire Buhrfeind moving past the cruical moves using all of her 5’11” and +2” to good advantage to take the Lead title. Claire was up from 6th in last year lead comp.

Alex Puccio, for example, donned a harness to start the comp; she wasn’t there for the ride and looked especially determined – her objective was to replicate Daniel Wood’s achievement five years ago when he won both the USA boulder and lead title in the same year.  The women’s semi-finals had been a bit of a show-stopper with many of the competitors falling off at the same place. However, the field in the women’s lead final definitely wasn’t lacking in quality with the likes of Brooke Raboutou, Margo Hayes and Michaela Kiersch on the grid alongside Alex Puccio. No doubt the three times men’s boulder champion, Nathaniel Coleman, also had an eye on the double in the men’s comp. If the speed comp went, as it seemed likely, according to the form book, John Brosler and Claire Buhrfeind looked like they had that all but sown up. 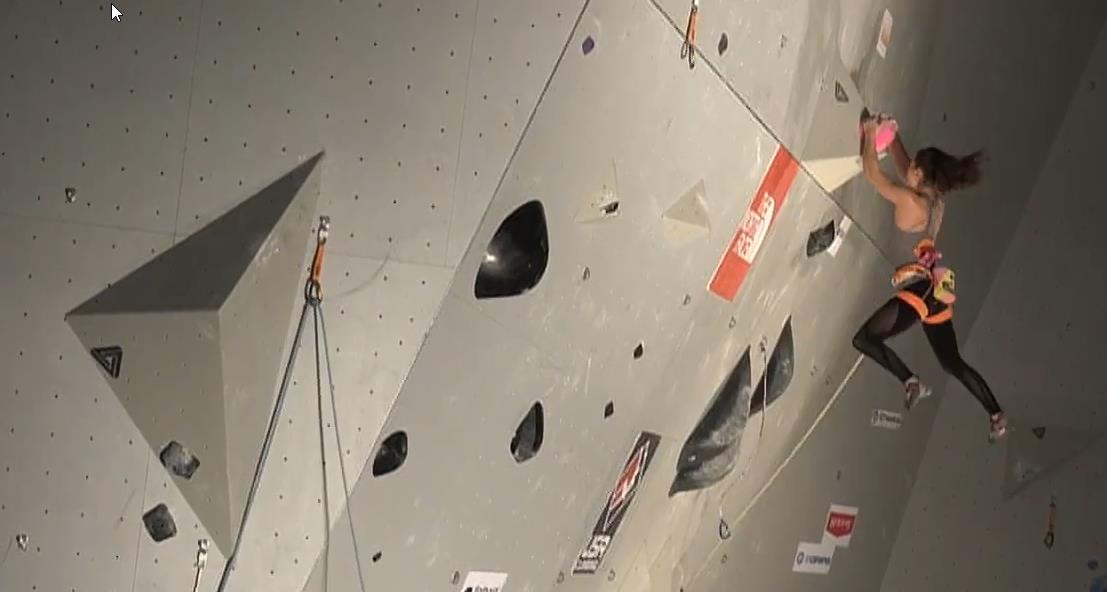 Brooke Raboutou on her way to topping the women's final. Brooke finished fifth in both Lead and in Speed comp showing excellent consistency in both events

The men’s lead final had some curved balls on-route; a fridge-sized square block volume to be precise. It appeared to do its job. Most competitors got round the block but it slowed down many and clearly sapped the strength from those that struggled. No competitor topped out so it was Sean Bailey stepping up from a fourth position finish in the semi’s that got the high point high on the headwall on a line of rat-crimps; his outdoor credentials (an ascent of Biographie F9a+ at Ceuse) perhaps coming into play.

Given that the women’s semi-final, as we say, saw many competitors falling at the same place the final started with what felt like a heightened apprehension amongst both competitors and audience alike. In stark contrast to the semi’s no fewer than five of the women finalists topped the route – albeit in largely different styles – only to be separated on count-back to the previous rounds. In the end it was Claire Buhrfeind, climbing last, that took the Lead title. Puccio’s possible Double in the Bouldering and Lead was dashed but Buhrfeind’s win in the Lead comp opened up for her the real possibility of a Lead & Speed Double! 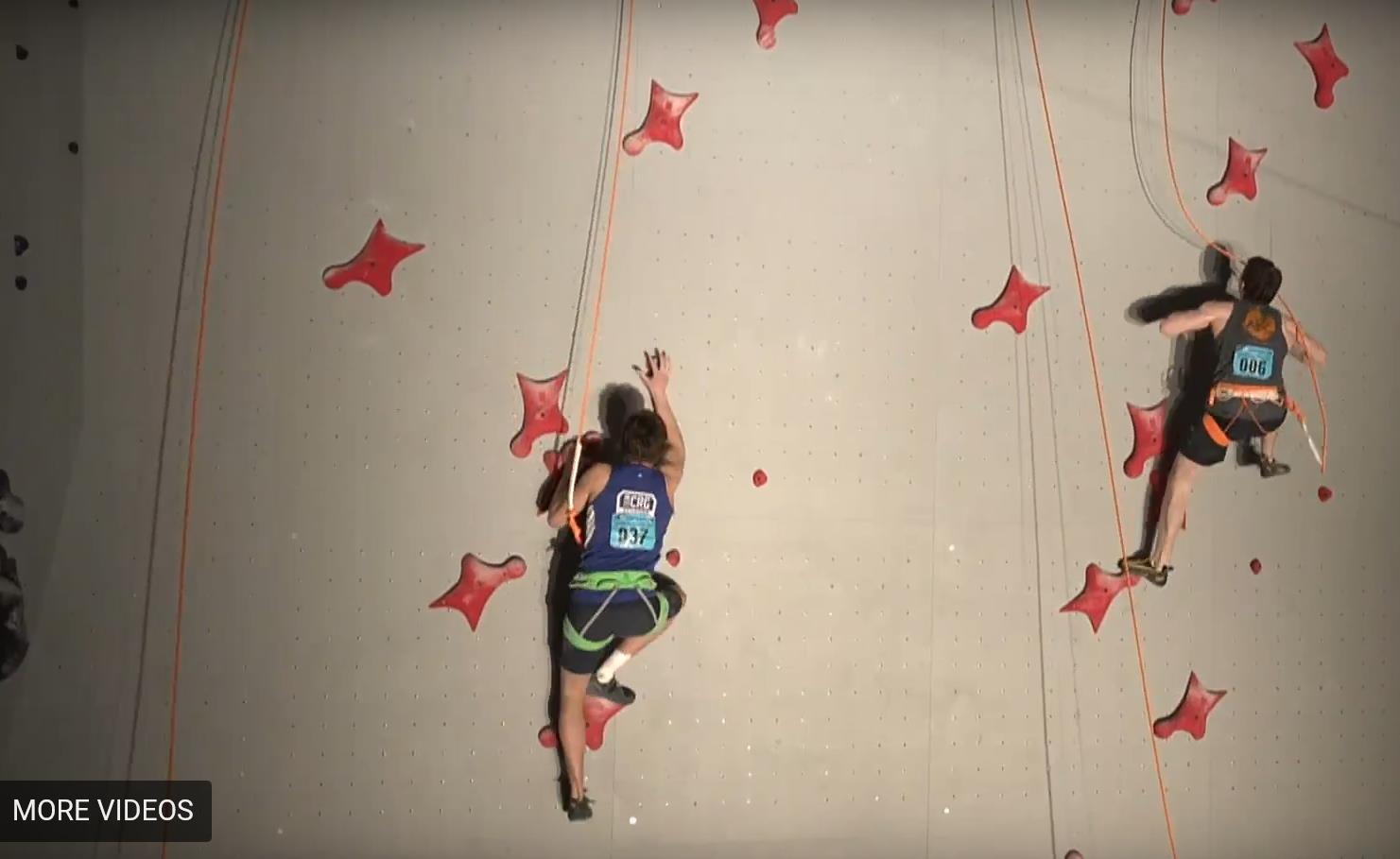 Finally then, the Speed comp saw the usual mixture of thrills and spills. John Bosler recorded a blistering fast 6.42 secs in the first round and then promptly went even faster with a 6:05 sec second run to give him his fifth consecutive championship in a row and a new USA national record at the same time. Wining all three rounds in the 2018 comp, Bosler certainly seems to have the hang of the speed climb! Despite a hick-up in the first round, Claire Buhrfeind recorded a sub 9 sec run on her second run – the only competitor to do so – and hence she collected her third speed title plus the Double! 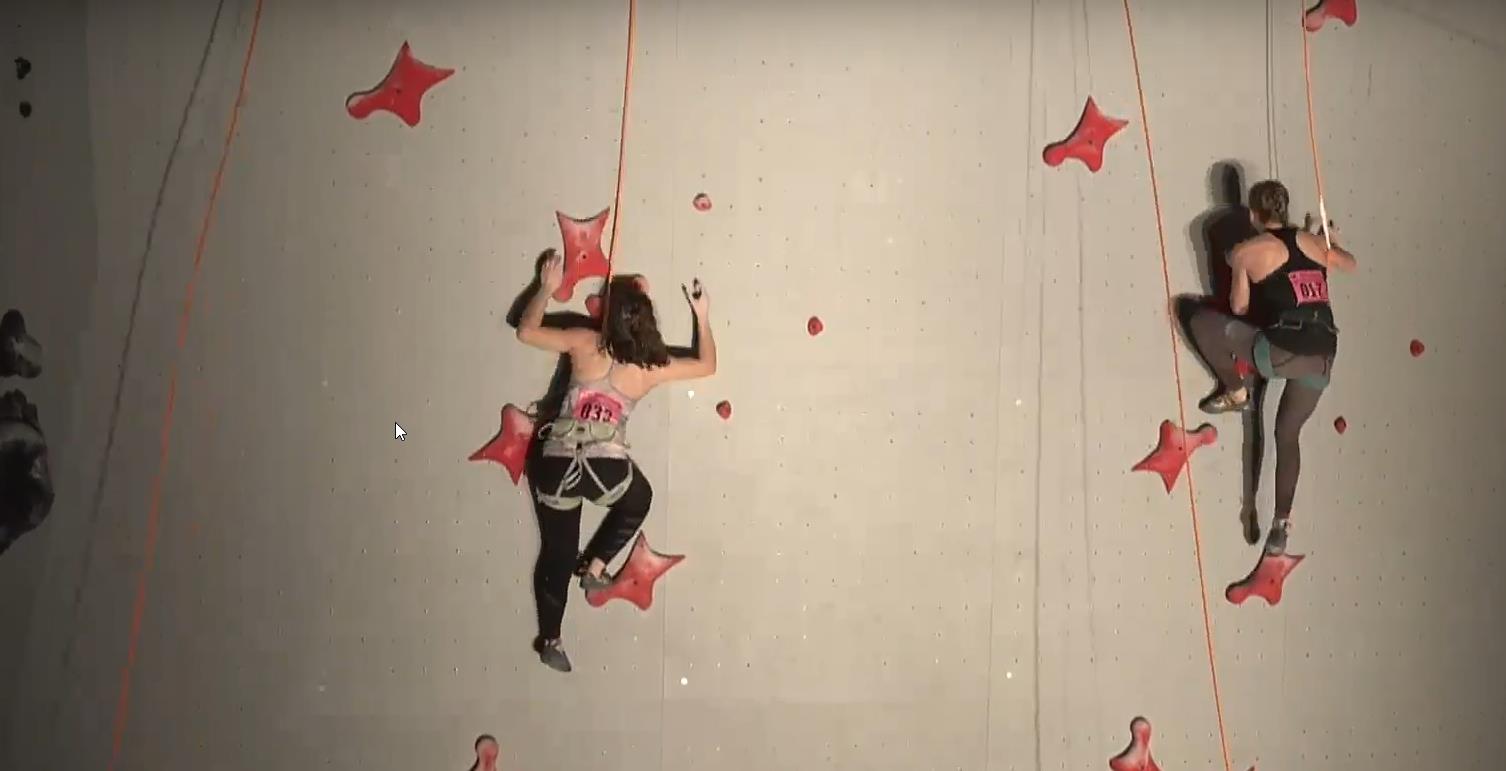 Whilst neither Alex Puccio nor Nathaniel Coleman were able to get the Boulder and Lead Double, Claire’s win in the Lead and Speed shows that getting doubles is possible. The question is, what signal does this send other athletes hoping to do well in the Olympics and does it suggest that they might need to re-assess their own training/climbing priorities going forward?

Watch the US Finals below…