New Life documents Caroline Ciavaldini and her husband James Pearson’s journey into and through the first 18 months of parenthood, as they aim to balance their careers as professional climbers with their newly found responsibilities. 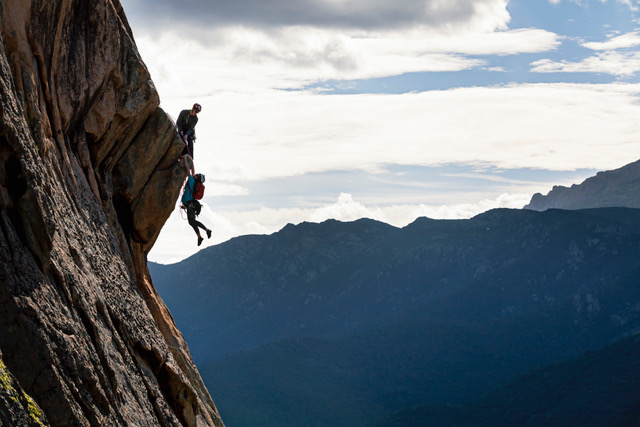 Incorporating archive footage from Caroline’s iconic First Female-Ascent of La Voie Petit and produced by Dark Sky Media, New Life follows the couple as they discover that Caroline is pregnant, whilst attempting a cutting-edge trad-climb in North Wales. The film captures Caroline and James – Climber Magazine columnists – as they navigate their way through pregnancy and the first year-and-a-half of family life, with both athletes re-evaluating their roles, ambitions and priorities along the way. The film shows Caroline as she fights her way back to peak athletic form, with her recent ascent of the multi-pitch route Une jolie fleur dans une peau de vache F8b (300m), in the Verdon Gorge, France. Caroline Comments: “Baby Arthur is now 1 and-a-half years old, and I just finished my summer project: Une jolie fleur dans une peau de vache, F6c-8b-7b-8a-5c-8a-6b in Verdon. James just sent his second and third F9a sport routes. I also climbed my very first Font 8A boulder last winter, whilst James did his first Font 8B+.”

Caroline adds; “On paper, at least, parenting seems to have made us better climbers. 1 year and 3 months ago, we were both drowning. Almost literally drowning under a lack of sleep, dirty nappies and our exhausted, crying infant. At the time, we would have bet our lives on the idea that simply becoming pro-climbers again would be a stretch too far. If a little fairy could have assured me there and then of the place we would be right now…it would have helped so much. The few words “300m multi-pitch with F8b max” are very far from summarising our summer. Of course, I had the satisfaction of 'ticking' this route, but the reality is that our tiny baby and all his belly aches, teething and tantrums taught us something that we had never managed to learn by ourselves up until now: the importance of living in the moment, to enjoy every blade of grass, every bite, and then every hold and every second, high up above the Verdon. It didn’t come easily. I definitely had the temptation to allow myself to “disappear” behind my new role as a Mother. I focused primarily on the baby, and James – who was initially forced to become a hands-on Dad by my feminist side – soon became a “papa poule” as we say in French, a super involved dad. We learned to make our climbing sessions more efficient, Arthur learned to be an outdoorsy baby, and we soon found ourselves loving our time at the crag. In rediscovering our world, through a child’s marvelling eyes – climbing suddenly has this new silver lining. I really hope you enjoy following our journey in this film, we really put our hearts into it.”

The full story of Caroline’s ascent of Une jolie fleur can be read on the Wild Country blog here.

You can also read about it in their column in the upcoming Jan/Feb 2021 issue of Climber out on 10th December.

New Life will be released this December and is supported by The North Face & Wild Country.

Watch a trailer for the film below: