Since arriving in early July Seb Bouin has been on fire in Hanshallaren making 2nd ascents/early repeats of three F9a+/b’s before doing the first ascent of Nordic Marathon (F9b/+). 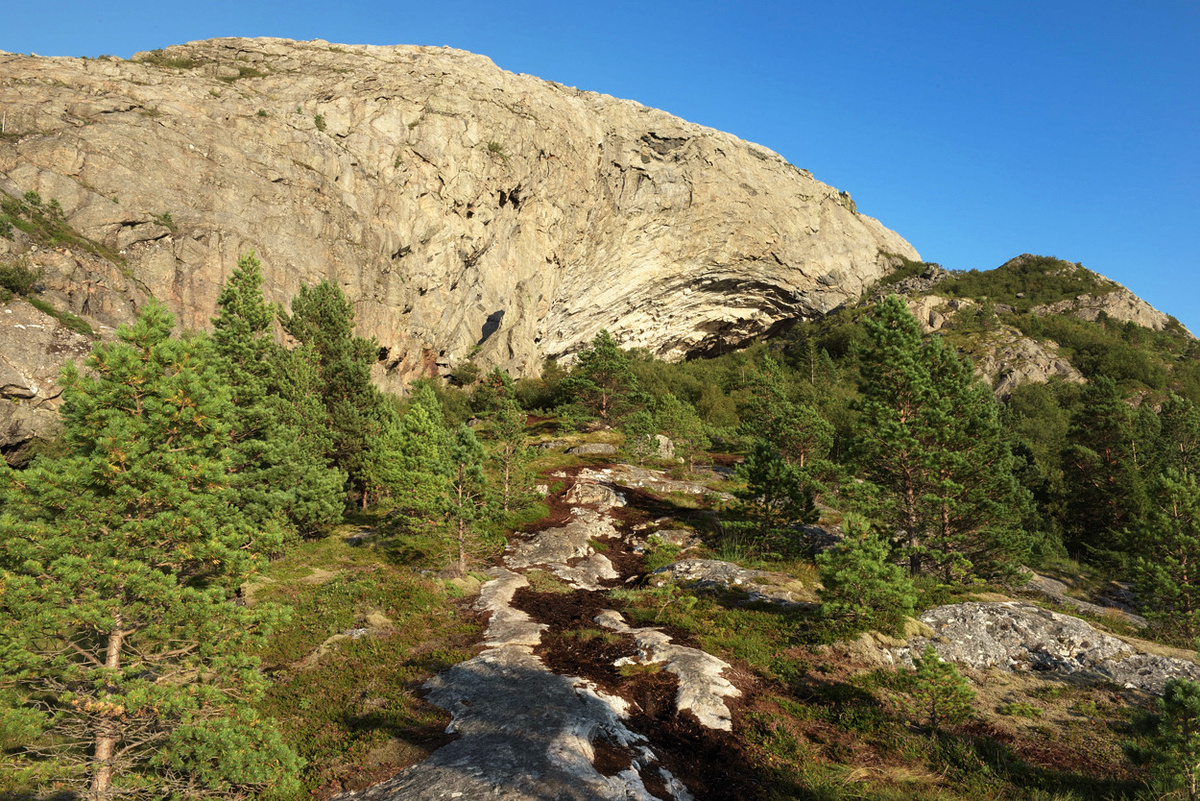 Seb’s history with the famous Flatanger cave goes back to 2013 when he arranged to meet up and climb with Adam Ondra: “I sent an email to Adam asking him if he will go to Flatanger during that summer. I was searching for a partner to climb with. I wasn't expecting any answer, we didn't know each other yet. The following day, I had an answer, proposing a date to pick me up from the airport of Trondheim. I booked my tickets, and joined him and Erick Grandelius for a whole month in this beautiful area. It was so exciting, a new beautiful place, a new crag, and the strongest climber of the world showing you the gems in the cave.”

Ironically, the route that Adam was trying when Seb arrived was Iron Curtain (F9b). As it turned out Seb belayed Adam on the first ascent. Seb explained the impact this experience had on him as a climber:

“The line looked so hard and beautiful. It was the first route he crushed during this trip. I had the chance to belay him during the FA, and it was impressive. He was doing a crazy gaston move for the crux. This was savage. Making this trip with these guys was so inspiring. It was a turning point in my climbing life. They opened my eyes regarding high-level climbing. I learned so much seeing them moving on the rock. It was different. I was too slow, not enough focus.”

Since then Seb has been to Flatanger a number of times climbing many of the hard routes such as Move which he did in 2019. 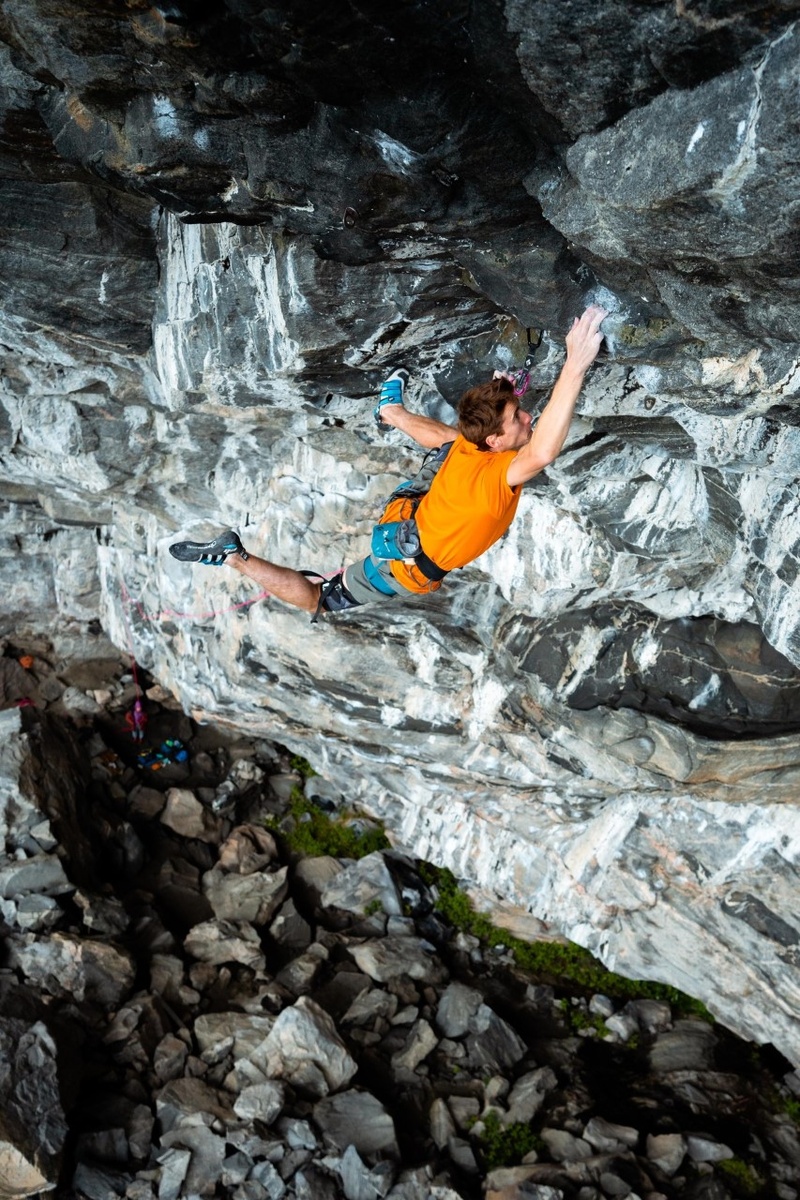 Arriving in Flatanger Seb got down to business trying Iron Curtain. Success wasn’t long in coming for Seb; on July 11th he posted confirming he had made the second ascent of Adam’s route. “So I started with Iron Curtain. The rock is so perfect, and the line is so cool. It took me 14 tries to do it, and 5 climbing days. I used kneepads to send it. I think the line is easier with kneepads. You can do the crux a bit differently. It's still quite hard, but less demanding on the shoulders, and more of a conventional boulder problem."

Seb continued: "Adam proposed a F9b grade without kneepads. And I am quite sure of this grade if you are not using kneepads. Regarding the time and investment it took me, it could be more F9a+ using kneepads. This line is exceptional.” 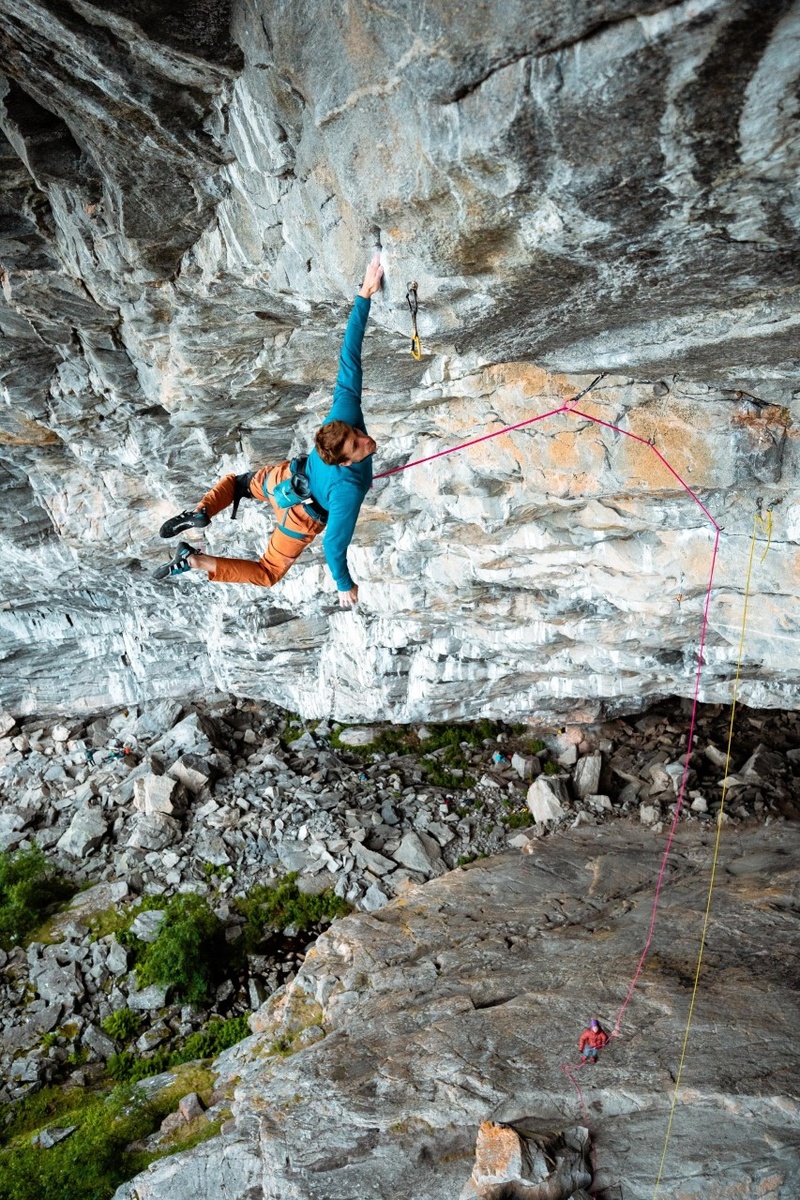 As part of his post on July 15th, Seb mooted the idea of a super route which crossed the entirety of the cave. Seb explained: “The idea of Adam Ondra is to cross the cave from the bottom to the top on the most overhanging part (it's basically a roof), and finishing via this pitch. This is truly something which excites me!"

Breaking the options down he said: "This mega route has the possibility of 3 different starts – I wonder which one will go! From the original route Thor's Hammer: this could be F9a followed by this cruxy F9a+ From Move: F9b/+ followed by a cruxy F9a+ From the F8c Nordic Plumber: F8c followed by F9a+ The hard part of this project (whatever is the starting route), is the endurance necessary, and how to keep enough power in reserve for the final pitch. We will have to climb around 50 meters, just to get on to the last pitch.”

Seb speculated on the grade of what this super-linkup might be: “It's hard to imagine what the overall grade that this project might be, but one thing is sure, this last pitch makes it really hard due to the style and the combination of the cruxes. This route will be around 80m of hard climbing with the redpoint crux on the last meters. Above the lip of the cave, there are still 50 meters of vertical wall to be bolted to top out on the very summit. The total line could be around 130m to be climbed in one pitch, switching ropes as we climb.”

At that stage the last “easy part” climbing to the summit of the cave hadn’t yet been bolted. Posting about his “dream project” and his intended game plan Seb wrote: “My dream project would be to do it from Move. Adam and I think this route could be F9c. I will surely try it first via Nordic Plumber or Thor's Hammer to train during this trip (possibly F9b+). My goal would be to try this "Move integral" (potential F9c) during my next trip / next season.” 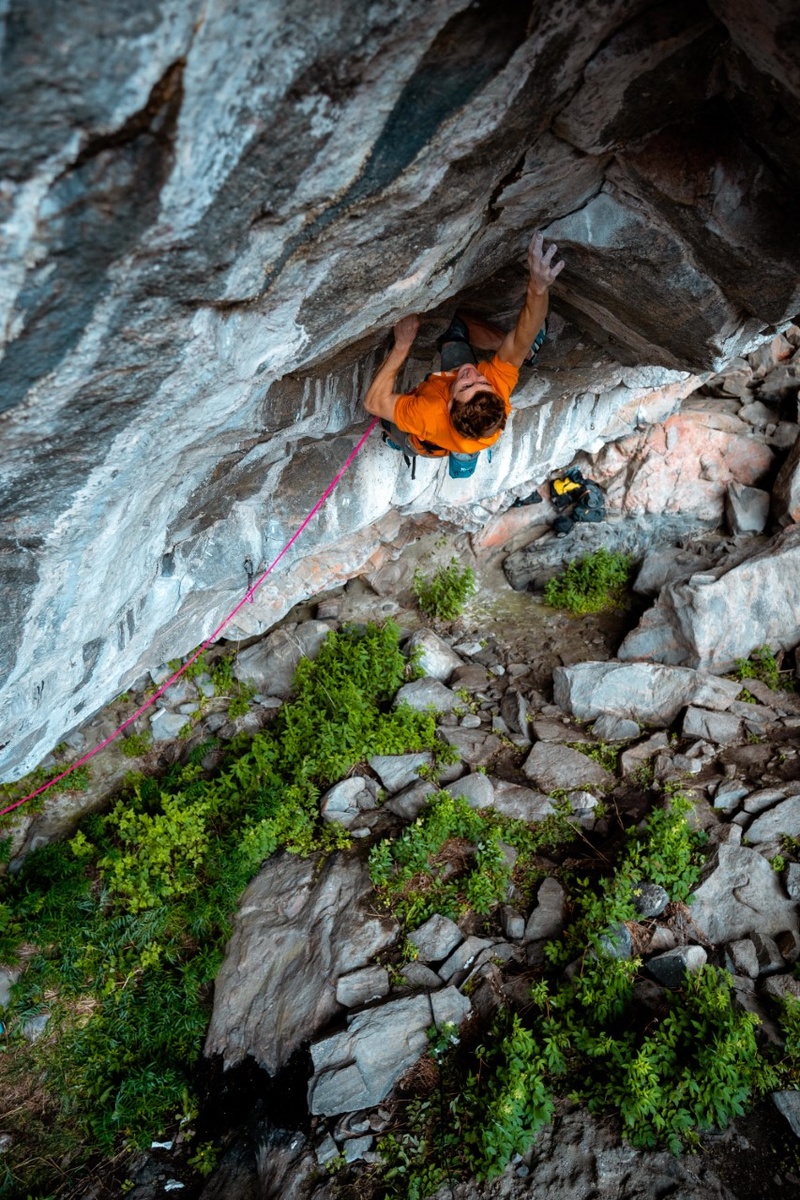 On July 19th Seb posted again, this time he’d repeated the first pitch of Change: “Change always scared me. Seeing Adam screaming and twisting his back and shoulders in the first pitch was impressive. I always thought this route will not be for me, too boulder at the start and too weird. I knew that the second pitch would be more my climbing style - big compression moves and endurance. But I was wrong.”

It seems as though Seb had watched another climber, Alex Rohr, working the first pitch of Change and was inspired to try his beta. Seb explains how his attempt went: “I was quite surprised to almost flash the different sequences (using kneepads). I was confident for my second go. But I needed a few more goes to adjust my own personal beta a little. I passed the crux on my fourth go, but it was literally impossible to clip the next draw (I was already skipping a bolt). I hadn’t checked out the clip in my working sessions. I tried for 30 manic seconds to clip the draw, right hand, no, left hand, no,...

I had two options, soloing two moves (not the hardest ones, but any mistake would be a ground fall), or stop myself. I stopped myself, thinking I have good chances to do it soon, after checking how to clip the draw. I finally understood that it was easier to clip the previous bolt and skip the actual draw I was hoping to clip. It took me four more goes to pass the crux and send the first pitch (8 goes in total). I continued in the second part to try the whole route (F9b+), but I was not clear in the second pitch. I need more working sessions to find the best beta for me.

At that stage Seb planned to continue to refine his beta on the second pitch of Change whilst working the big project across the roof.

Reaffirming that whilst his ultimate goal is to start up Move (F9b/+) and then link that into pitch 2 of Thor’s Hammer (F9a+) at a possible F9c, Seb started by linking Nordic Plumber (F8c), into pitch 2 of Thor’s Hammer before continuing to the summit of the cave to give Nordic Marathon (F9b/+). Seb described how his first ascent went: “It changed so much the end. Coming into the F9a+, with my arms already so pumped in the last crimpy crux after 80m of climbing was insane. I was falling there a few times. And then falling on the previous cruxes as well.

He further commented: "The sheer size of the route makes it hard mentally. You can have one go every two days. It's so much climbing, in one intense burst that you simply can't give two goes in a day. Then if you want to be as fresh as possible, you need a rest day in between. So it was quite hard psychologically to only give it one burn every two days. The pressure felt so high in this last crux. The rope drag was also insane. Even if I had already switched ropes once during the route - I had to untie my knot and free-solo the last 5/10 meters (really easy climbing).”

His first ascent of Nordic Marathon at F9b/+ has been the culmination of a remarkable month's climbing at Hanshallaren for Seb. It's clear that his psych is very high and that his fitness levels are quite remarkable. There's another two months or so of the climbing season left at Flatanger so Seb will have more time for more routes. It seems highly likely that we'll be reporting again about yet another success. Go Seb!