Bonington climbs the Old Man of Hoy again at 80

Sir Chris Bonington, the UK’s best known mountaineer, has successfully repeated one of his most famous climbs, just weeks after turning 80. With fellow climber Leo Houlding, Bonington completed a route on the Old Man of Hoy, 48 years after he made the first ascent of the well known sea stack in the Orkney Islands. Bonington made the climb to mark his 80th birthday and to raise awareness and funds for motor neurone disease (MND) charities in memory of his wife Wendy, who died of the condition last month. 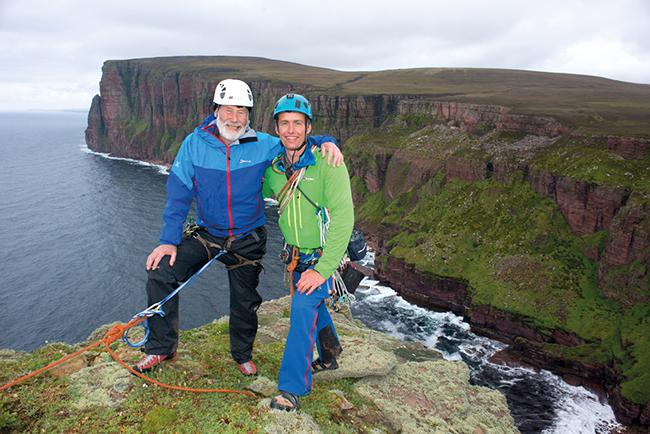 Chris and Leo on the top of the Old Man of Hoy. Photo: Berghaus

Along with Rusty Baillie and Tom Patey, Sir Chris Bonington made the first ascent of the 449ft Old Man of Hoy in 1966. Bonington and Patey returned the following year and were part of the famous three night long live TV outside broadcast, The Great Climb.  Leo Houlding started climbing before he was 10 years old and was just 11 when he first scaled the Old Man of Hoy – he remains the youngest person to have completed the feat. Bonington and Houlding have climbed together many times before and are fellow members of the Berghaus team of athletes.  Bonington is also non-executive chairman of Berghaus, the British outdoor company that he has been associated with for 30 years.

After waiting 24 hours for a weather window, Bonington and Houlding started their climb of the Old Man of Hoy early on Wednesday 20 August. Their route involved five pitches of climbing and included some very challenging sections. As the day wore on, the weather threatened to close in and the two climbers reached the top of the Old Man at around 5.00pm, in deteriorating conditions.

Chris commented: “I am exhausted, but very happy. Climbing with Leo is always a pleasure and his support certainly helped me get up the more difficult sections. I’m definitely not as lithe or flexible as I was in the 1960s!  It was a very emotional moment at the top. I was delighted to have completed the climb, but of course I was also thinking about Wendy, who was my rock during all of my previous trips, whether near or far. I hope that people who hear about this climb will take the time to find out a bit more about motor neurone disease and help us to raise some money to fund research into finding a cure.”

Leo Houlding added: “The old man was amazing on the Old Man. Chris was a hero of mine as I grew up and I’m now lucky enough to be able to call him a good friend. I’ve seen the footage of the 1967 outside broadcast – it was one of the iconic moments in British climbing and fired the imagination of the public, of people like me. It has been a great privilege to return to Hoy with Chris, who never fails to amaze me with his appetite for adventure. Oh, and he can certainly still climb very well. Is he really 80?”

Fundraising in memory of Wendy Bonington

In July, Sir Chris lost his wife Wendy to motor neurone disease (MND) and will use his 80th as an opportunity to improve awareness of the condition, for which there is no cure and about which very little is known.  He and his family are also raising funds online for three organisations, including the Motor Neurone Disease Association, which funds research into MND and provides support, along with Hospice at Home and Cumbria Crossroads, which both gave care and support to the family during Wendy’s illness.