In an on-line report published yesterday it appears that Michele Caminati has taken a ground-fall off Elder Statesman (E7 7b) at Curbar. 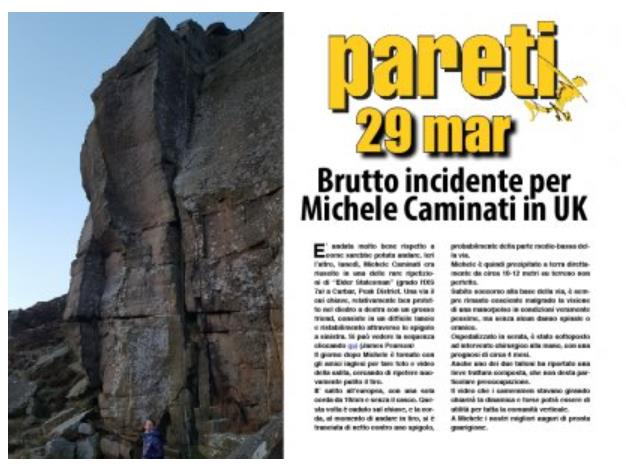 The report on Pareti.

Pareti, the Italian Climbing Magazine, seemingly reported that Caminati, an enthusiastic and accomplished gritstoner, made a rare repeat of Elder Statesman earlier this week. Caminati then returned to Curbar to replicate his success with a photo/film crew. During the second attempt to reclimb Elder Statesman, Caminati fell off whilst executing the crucial swing out onto the arête. The resulting fall sliced through his single rope and Caminati fell c.10m to take a ground fall. Miraculously, Caminati survived the fall albeit sustaining broken wrist and ankle.

Elder Statesman was originally climbed by Steve McClure in 2004. Steve utilised three lead ropes to protect his ascent and mitigate the hazard of damaging his lead ropes on the arete shoud he fall. Elder Statesman is believed to have been repeated on only two previous occasions during the intervening period firstly by Steve Dunning and more recently by James Pearson. Micheli Caminati's ascent is thought to be the fourth overall asent therefore. Prior to Steve's orginal ascent, John Dunne was understod to have climbed the arete on top rope.

Click thru here to see the report in Pareti.