Big Bang, the film of Emma Twyford’s quest to redpoint Big Bang - the jewel in the LPT crown - will premiere this coming Friday (April 17th) at 8pm. 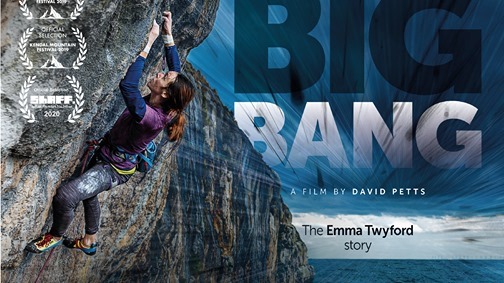 Emma is no stranger to hard climbing having dispatched numerous traditional and sport climbing testpieces at both home and abroad. Her CV lists no fewer than three E9’s as well as sport routes up to F8c. Emma first looked at Big Bang back a couple of years ago albeit it was obvious to her that it was going to be a battle as she told Climber at the time of her ascent last September: ‘I first had a look in 2017 but could barely do the crux moves, if I did a move it was maybe 1 in 10 goes. I wasn’t good enough so I walked away and started doing my homework and some base level training! The route has so much history as it used to be the first 9a in the UK. It mostly suited my style and on a practical level it was close to home. I was drawn to the line and the personal challenge of finding my limits.’

LPT is a tortuously difficult crag to have a project at, not least because it’s tidal and conditions are fickle. Remember that all three ascensionists, Neil Carson, James McHaffie and Emma, have all lived in North Wales whilst they were working on Big Bang. Emma outlined to Climber the lengths she went to in order to get the so-called good connies windows to try Big Bang: ‘I’ve had to be a geek and look at tide charts almost a year in advance so I could book route setting around the good tide times. Sometimes though I would be too tired after a hard week of setting, I’ve been pushing my poor body so hard between this project and route setting that at the beginning of this year it broke. I made the decision to take the financial hit and put the route first, just taking the bare minimum of work if I could.’

Emma and Dave Petts, the film-maker who shot and edited the film, will be doing a live Q&A via the BMC Facebook page after the showing so fire some questions their way after the premiere.

Finally, the film is free to watch but donations are welcomed to The Climate Project: a new BMC initiative to combat climate change on our moorlands. Click here for a link to that.

The BMC TV/Volo Digital wish to thanks the film sponsors DMM, Scarpa, Climbskin and FrictionLabs. They also would like to give a big thanks to Patagonia for their support in helping us create the tour, even though it ended up being cancelled due to the Coronavirus.