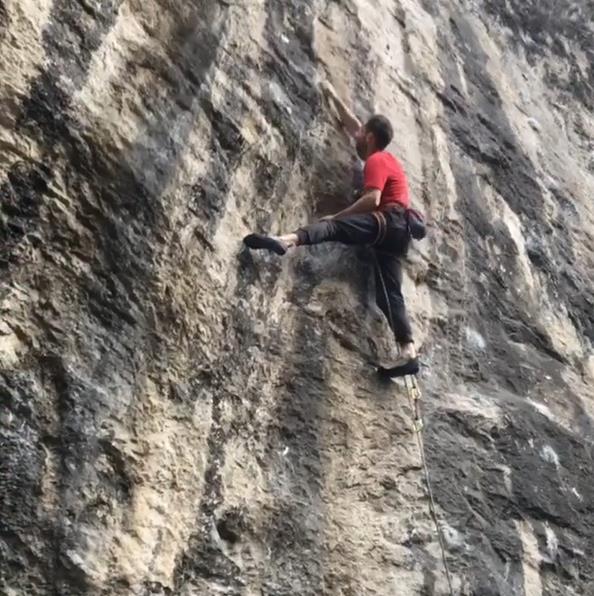 Whilst most of the Peak District is currently gopping wet from the high humidity air which is coming in from the north-east, Raven Tor has survived confounding those that haven’t bothered to venture out this week. Ben, along with a number of others, has been soldering-on intend on getting that end-of-season tick in. Yesterday’s temps, a steady 5 degs, necessitate careful pre-climb preparations; small beer given the returns that Ben now has!!

Ben’s name, as every keen climber knows, is synonymous with the development of Raven Tor in the Eighties/early Nineties.  Jerry Moffatt, Ben’s partner on many routes, was likewise instrumental in the development at the Tor; Evolution - climbed in 1995 – was his final contribution. Evo, as it is affectionately known as, saw repeats back in the day from Malc Smith, Steve McClure and from Nic Sellars who was at the height of his powers at the time. Shockingly, Nic down-graded Evo to F8c although not everyone agreed with that! In 1998 Steve McClure somewhat overshadowed Evo when, having repeated Evo, he added Mutation (F9a then but seriously thought of as F9a+ now). Recently however, Evo is back in vogue with ascents from Ryan Pasquill, Alex Megos and Will Bosi and current thinking is that Evo is worth it's original F8c+ grading. Fast forward to 2018 and Evo has seen ascents from Pete Dawson, Stu Littlefair and now Ben. All three of this year’s ascensionists have – coincidently – also done Rainshadow, Steve McClure’s Malham  testpiece.

Ben was clearly psyched to have completed the redpoint and closed off the 2018 season on such a high. “Super psyched to finally redpoint this really hard Jerry Moffatt test piece from the 90s at my local crag Raven Tor” he wrote on IG. He added; “It’s a great end to the year for me which has been one of the best of the past 35 years climbing.”

Since completing Rainshadow a couple of years ago, Ben has spent a fair bit of time on his former nemesis at Kilnsey; the line which Steve McClure climbed to give Northern Lights in 2000. This year alone, Ben has clocked up another 15 days on Northern Lights. Interestingly Ben also mused on the grades of these routes in his post on IG. Firstly Ben contrasted Evo and Rainshadow saying; “[Evo] Only gets 8c+ but I don’t think there is a grade difference between this route and Rainshadow 9a.” Then he goes on to compare them to Northern Lights; “Northern Lights is another level to routes like Evolution or Rainshadow and I’m sure one day will be recognised as 9a+.”

As we all love a good discussion about grades CLIMBER couldn’t resist getting in touch with Ben to ask him a bit more about Evo. “Grading is so hard and I’ve not done any F8c+’s since the 90’s so it’s hard to compare or say for sure. However, it’s [Evo] is definitely F8c+ and I would say a pretty hard one” was Ben’s comment. And having sunk 90+ days into Northern Lights Ben’s pretty confident in his grade assessment of F9a+ for that too; “Three ascents in 18 years - and look who by? – I’m sure that would be F9a+ anywhere else.”

CLIMBER also asked Ben whether he thought doing a lot of routes this year - for example, by such as a lot of the harder routes at the Chee Dale Cornice - had given him a focus and allowed him to keep his momentum going; “Doing other stuff hasn’t kept me motivated or focused because I felt that way anyway but getting on different routes and redpointing them regardless of grade has definitely made me a better climber.”

Going forward Ben’s thirst for hard climbing and Northern Lights in particular hasn’t diminished one iota; “I feel in great shape for my age and looking forward to renewing my battle with this route again next year.” What this space folks…