Ashima Shiraishi back in outside action with a vengeance

The young American rock star that is Ashima Shiraishi has returned to outside action with a vengeance in southern New York over the past weekend firing off a string of hard blocs including the second ascent of Nuclear War (V14/Font 8b+). 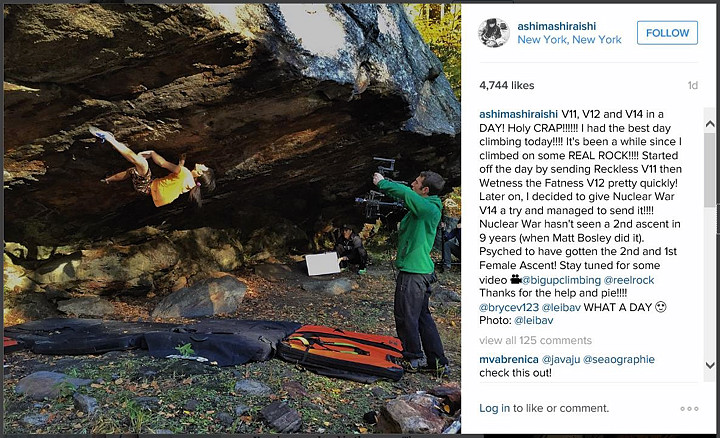 Her Instragram post said it all: “ashimashiraishiV11, V12 and V14 in a DAY! Holy CRAP!!!!!! I had the best day climbing today!!!! It's been a while since I climbed on some REAL ROCK!!!! Started off the day by sending Reckless V11 then Wetness the Fatness V12 pretty quickly! Later on, I decided to give Nuclear War V14 a try and managed to send it!!!! Nuclear War hasn't seen a 2nd ascent in 9 years (when Matt Bosley did it). Psyched to have gotten the 2nd and 1st Female Ascent!”

Shiraishi has risen to prominence in the elite female bouldering world over the last few years. Last year - whilst aged 13 - she repeated Golden Shadow (V14/Font 8b+) in Rocklands, South Africa becoming the second female to climb at that level. We reported earlier this year (Click through here for that report) on Shirarshi’s visit to Bishop where she repeated The Swarm V13/14 or Font 8b/8b+.