The annual Arco Rock Legends Award will take place in Arco, Italy on August 26th whilst the Rock Masters comp itself will be held between August 26th and September 4th.

Known as the sport climbing Oscars, the Rock Legends sees a number of men and women nominated for two renowned awards; The Wild Country Rock Award – for which Dani Andrada (Spain), Jacob Schubert (Austria) and Laura Rogora (Italy) have been nominated and the la Sportiva Competition Award – for which Janja Garnbret (Slovenia), Mina MarkoviÄ (Slovenia) and Adam Ondra (Czech Republic) have been nominated. In addition, the Dryarn Climbing Ambassador prize, will be awarded to the climber who has contributed significantly to promoting climbing worldwide, will be revealed during the awards ceremony. 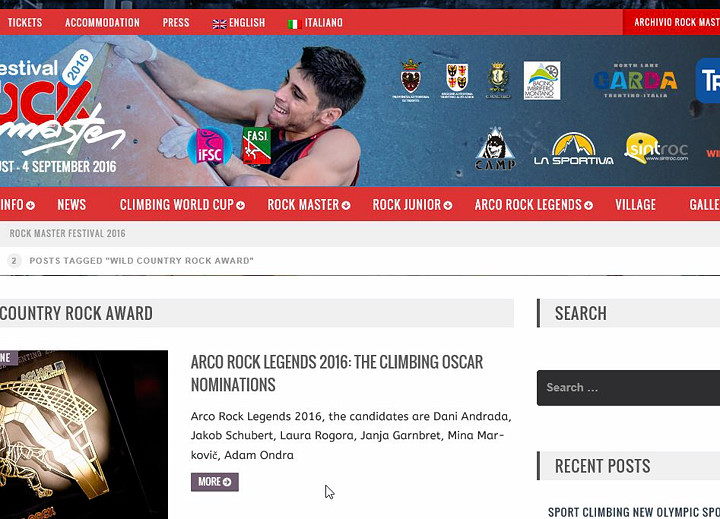 Here’s what the organisers say about the Wild Country Rock Award: “The Wild Country Rock Award is in itself one of the novelties of this edition. The historic British climbing brand replaces Salewa, the group to which it belongs since 2012, bringing with it a vision for the future that has distinguished the company ever since its outset. A sort of “compass” that guides towards tomorrow, deeply rooted in this year’s three candidates: expert Dani Andrada, mighty Austrian Jakob Schubert and young Italian Laura Rogora. Andrada is no newcomer to this award and some may recall that he had been nominated in the award’s first edition in 2006. More than a decade has passed since then, and while Andrada climbed his first 9b last year, perhaps more importantly he has relentlessly continued to establish new lines. He is one of the undisputed driving forces in sport climbing, not only in Spain, and his routes are a priceless heritage for the entire climbing world. Another force of nature is Jakob Schubert who, after three competition nominations, is now in the running for the Rock Award. This should come as no surprise, given that of late the world’s “climbing machine” has devoured a 9b, a few 9a+ and yet another 8c on-sight … Not bad for someone who hits the crags only a few times a year. A bit like14-year-old Laura Rogora, the competition champion who in February at the Arenauta cave in Sperlonga climbed her first 9a. The first, as it happens, Italian female 9a… this is a historic achievement, confirmed by two 8b on-sights that underline her undisputed capabilities. Rogora is already the new face of female climbing, Italian and worldwide, destined to achieve even greater things in the future.”

And for the La Sportiva Competition Award: “The three ace competition athletes nominated for the La Sportiva Competition Award are, in alphabetical order, Janja Garnbret, Mina MarkoviÄ and Adam Ondra. In other words: the undisputed rising star, the confirmed superstar and the competitor who seems to have come from another planet. In her senior debut young Garnbret from Slovenia left everyone speechless, while in her Youth category she was simply unbeatable and was crowned Lead and Bouldering World Champion at Arco. Last season her teammate MarkoviÄ managed to win the Lead World Cup for the third time, as well as the coveted European Lead Championship; seeing her nominated once again, after her win in 2013, is unsurprising therefore. And to tell the truth, it comes as no surprise that Ondra has been nominated yet again. Four Rock Awards and one Competition prize speak volumes about this Czech athlete who is now in the running thanks to his second Lead World Cup victory and a silver medal in the Bouldering World Cup, which, as it happens, enabled him to win the coveted Combined title. His impressive 2015 tally is completed with a further two silver medals, won in the European Lead and Boulder Championships.

An international jury, meeting on August 26th, will decide the winners of the two awards after which the decision of the jury will be announced. The winner of the Dryarn Climbing Ambassador will also be announced at that time.

For the record here are the past winners of these awards…

And finally, the international jury for 2016 are…