Word from Berghaus is that Mick Fowler, alongside his long term climbing partner Paul Ramsden, has just bagged another major Himalayan first ascent.

Fowler and Ramsden reached the summit of Gave Ding, a 6,400m peak in far west Nepal, on Thursday 22 October.  They climbed the mountain by a route on the north face in a six day push, and then descended to base camp over two days, via the west ridge and north flank. 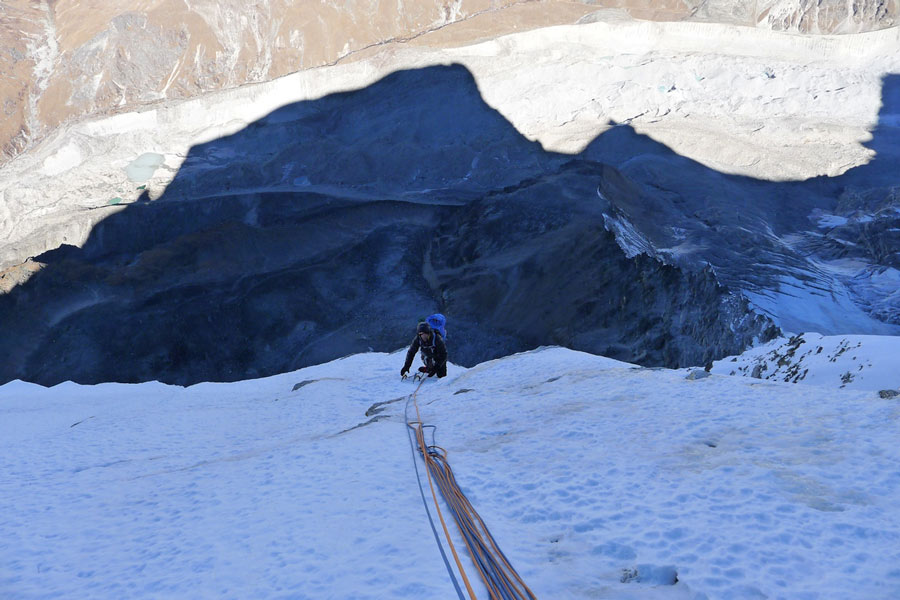 High on Mugu Chuli, West Nepal in 2011. “It’s shadows like the one below that are visible on Google Earth and lead us to think we have found something special for this year” said Fowler on his previous posts on the Berghaus website.

Gave Ding is located in one of the remotest regions of Nepal, in a valley that had never previously been visited by westerners.  Mick Fowler spotted the mountain during an earlier expedition in the area and started planning his 2015 trip.  Once they had secured the necessary permits, Fowler and Ramsden left the UK at the end of September.  They were supported during the climb by Steve Burns and Ian Cartwright.

After returning to regional administrative capital Simikot, Fowler stated that this was one of the best trips that they had ever experienced, adding: “My happiness bubble is close to bursting.”

Mick Fowler and his team are due to be back in the UK early next week, and more details will be available soon after.  A blog written by Mick Fowler in September, anticipating the trip ahead, can be found here.