Hot news from Spain is that Angela Eiter has become the first ever female to send F9b by redpointing La Planta de Shiva at Villanueve del Rosario, Spain. 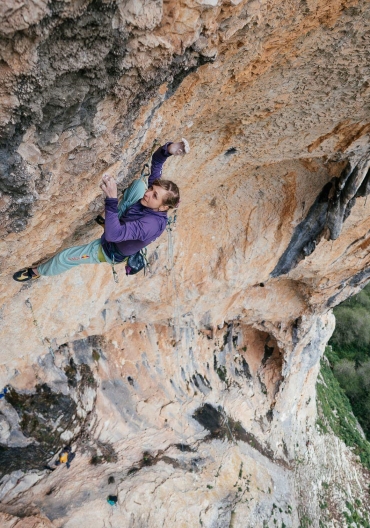 Following hot on the heels of Margo Hayes's redpoints on La Rambla (F9a+) and Biographie and Anak Verhoeven's first scent of Sweet Neuf (F9a+) – click here for that report – Angela Eiter’s ascent of La Planta de Shiva has exploded the standard for female redpointing bringing it within the proverbial stone’s throw of the men.

As reported by 8a.nu (here), the two previous climbers – Adam Ondra who did the first ascent and Jacob Schubert who did the second ascent - to send La Planta remarked that it was one the hardest routes of that grade that they had done at the time of their ascents. 8a.nu report that Eiter has worked La Planta over several trips over the last two years and has been training specifically for the route. Eiter dispatched the F8c first pitch quickly and was decided that the second pitch – mainly endurance climbing on crimps – was something that ‘suited her’.

Angela Eiter was, until she retired, an incredibly successful international competition climber having won no less than three overall lead World Cup victories (2004, 2005 & 2016) one combined World Cup (2006) as well as six Acro Rock Master titles and five combined World and European Championship gold medals. Her dominance came in 2005 when she won eight out of nine World Cups. After years of competing and battling with injuries as well as weight issues and motivational issues, Eiter retired from the comp scene in 2011.