Ally Smith has cashed-in on the current dry spell to redpoint his Kilnsey project to give The Pirate, a mega pitch through one of the UK’s biggest roofs at a probable F8c.

Ally Smith on the business end of The Pirate on the Mandella roof at Kilnsey. Video grab

Ally took the easiest way up the lower wall to get to the Bullet belay some 30m off the deck; “It's about F7b+ to link Sidekick (F7a+) into the top of Bullet (F8a+)” Ally told CLIMBER. He then describes the route from there: “Going right along the break is the new bit of climbing, across the top of Showtime (F8b), through the middle of Epic Adventures (F8b+/c) and eventually joining Neil Gresham's Freakshow. This section is brilliantly sustained, each move building in difficulty.” 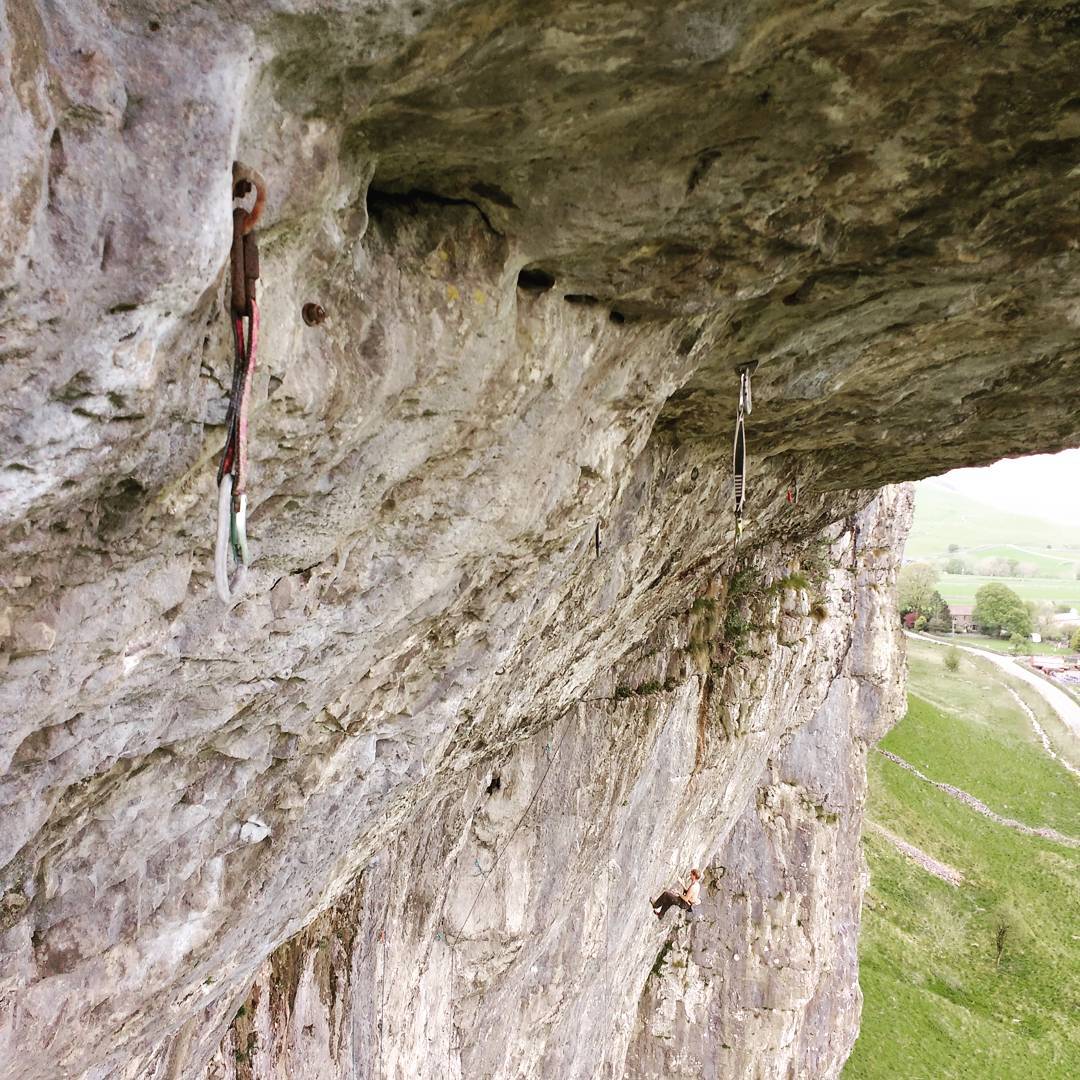 The View from the Office, May 2016. Photo Ally Smith

Ally first spotted the line three years ago. It took him a couple of days with an old drill to get the bolts in before he could even start trying it. Last year he spent some time working the project but the area around an annoying damp pocket towards the end of the route caused Ally considerable grief; “I decided to skip 2 clips here to try and get through the moves before my arms faded, and took some big swinging falls last autumn before it got permanently wet for the winter.”

Fast forward to this year’s campaign Ally finally got through that section for the first time and immediately got a high point on the final easioer section into Mandela. Ally explained his progress since then; “Since then I've been chipping away at it, with my high point moving a few moves upwards each session. However, 10 days ago I completely sabotaged myself when I clipped one of the draws on Mandela and created nightmare rope drag and couldn't move from the lip, just half a dozen moves from the sanctuary of vertical ground.”

After sorting that out it still wasn’t plain sailing; “I even fell higher than that, with hands, but not feet, over the lip the time before completing the route. You can imagine the relief when I got back up there with enough in the tank to finish it off.”

Ally on the middle of the roof of The Pirate. Video grab

Not surprisingly there’s some kneebar action up there which is crucial as Ally explained; “The route was made possible for me by using a knee pad - there's a good resting point on Freakshow next to where Neil had a bat hang rest on the FA of that route. I was pretty strong on kneebars after a winter climbing in Parisella's Cave and could shake out for a minute or so before my calf and core tired out. Maybe a kneebar guru like Alex Barrows could milk it for longer and knock a grade off?”

Understandable Ally is totally chuffed to get closure. We asked him about the grade; “I've gone for F8c - based on comparison with other routes in the roof. It's harder than Guns in the Sky (F8b+), and has longer sustained difficulties than Freakshow (F8c) but without such an acute crux as that route.”

Ally’s planning on capitalising on his fitness and hoping to get more of the routes through the roof ticked off whilst they’re super dry.