A little over a month after being crowned Mr BIFF 2017, Aidan Roberts has made what is believed to be the second ascent of Traci Lords Sit (Font 8b+) at Lad Stone, Coniston. 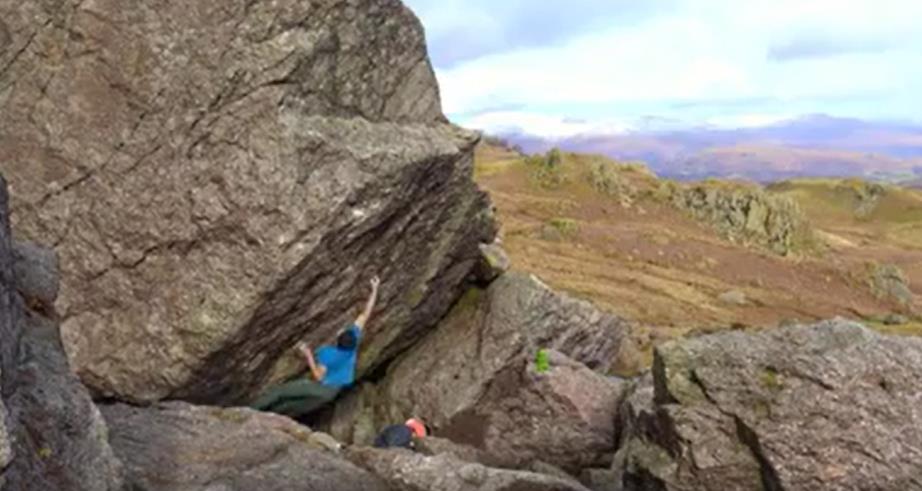 Lad Stone, Coniston isn’t exactly on the beaten track when it comes to bouldering – indeed many not have heard of it – but for the uninitiated it’s in a superb mountain setting which comes with a half an hour’s walk-in.

Traci Lords (Font 7c+), originally done by Lakes Blocmiester Greg Chapman, came into being in 2003. Located on The Bothy, Traci Lords has long held the reputation as being one of the best hard problems in the Lakes. The sit start was added later by John Gaskins at a suggested grade of Font 8b although it was considered that Font 8b+ was probably more realistic. Latterly, a hold on the original Traci Lords has broken and subsequent repeats of the problem have used new beta which is said to be easier.

Having repeated Traci Lords last year Aidan has been back on a handful of occasions since to try the Gaskins sitter. CLIMBER have been in touch with Aidan for the low-down…

Firstly, congrats on doing Traci Lords Sit. A new level for you – your training has obviously been going well and that must be very satisfying?

Thanks. Yea I haven’t made large changes to my training but progress is slow and conditions rarely allow me to climb outside so best make the most of it while I can!

You repeated Traci Lords with Billy Ridal last year whilst recovering from an injury. How did that go at the time and did you decide straight away to have a look at the sitter?

Yea, that’s right. It was a completely different problem without a right foot but it suited me well at the time. I didn’t try the sit for at least 6 months after as I knew a right foot was required at this level. I had a couple of short sessions on it prior to the day I sent it which I spent trying an entirely different method before opting for a more basic one when I did it.

Traci Lords recently lost a hold - can you describe the impact of that please?

So the left hand hold of the stand start is now become a reasonable horizontal edge whereas it was a shoulder (gaston) before. It has undoubtedly made the problem easier but before it broke I struggle to see how it was done. The rock now seems pretty solid and I wouldn’t anticipate future breaks.

Many of Gaskin’s problems are renowned for their small holds – can you talk us through Traci Lords Sitter please?

I’d say it’s no exception! The sit adds two low percentage moves revolving around a small right hand two finger crimp. Don’t want to give away the micro-beta and ruin peoples fun but it’s essentially for those with strong fingers and some good tension.

The day you did Traci Lords Sitter you also did a new hard start to Manpower at Font 8b as well as flashing Booze Cruise (Font 8a). Impressive day out by any measure! Did you have three Weetabix for breakfast that morning? And can you describe these problems for us as well please?

It felt a productive day for me! An early morning and a light breakfast got me up there to catch the good conditions before the rain set in. The new stand to Manpower feels a more logical one as it means that you no longer pull of stacked pads or a rock. It only really adds two hand moves and some hard foot moves but makes a tricky set up for an already hard very low percentage one move 8a. I feel that this problem could almost be harder to do than the Traci Lords Sit and suits my style well but 8b feels fair as its more down to making no mistakes. Booze Cruise is a great bloc on surprising comfy quartz crimps, very much suited my style and I was hoping for the flash and wasn’t disappointed.

Have you spotted anything else to have a go at up there or is it time to move on?

I’ve spent a few sessions on another project up there which feels like it could be a lot harder than most things around so with some time and work I’d be keen to get that finished off.

Thanks to Aidan for the beta. Click through here to watch a video of Aidan sending Traci Lords Sit - on Aidan's Facebook page…