Aidan Roberts has added Outliers (Font 8c) at Trowborrow to give one of the hardest problems climbed in the Lakes and the UK. 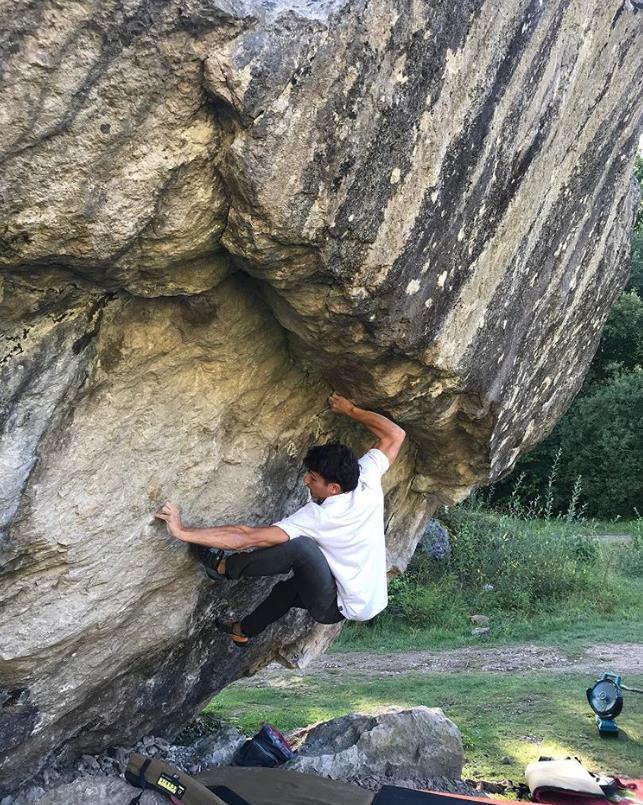 Jack Palmieri was with Aidan and watched him make the first ascent. Jack is confident that this is a significant ascent both for Aidan and British Bouldering and telling Climber, “Outliers is amazing, tremendously difficult and fits Aidan’s style brilliantly. His performance on the day was unreal to watch, doing Isla afterwards in the manor he did showed how far beneath his level Font 8b is. Not to mention Shallow Groove (Font 8b). The future of British bouldering...”

Aidan is no stranger to hard bouldering. Back in 2017, a month or so after being crowned Mr BIFF, Aidan made the second ascent of Traci Lords Sit (Font 8b+) at Lad Stone, Coniston - click here for that report. Traci Lords Sit had long held the reputation has being one of the best hard problems in the Lakes. The sit start was added by John Gaskins at a suggested grade of Font 8b but Font 8b+ was considered more realistic.

Since then Aidan has had a number of successful trips including visiting Colorada last year when he did countless hard problems as well as the first ascent of Railway which he felt was ‘probably Font 8c’. Having recovered from a variety of injuries, knee and finger problems, Aidan – like many - has spent a fair bit of time this year on steep boards and that time and effort is clearly paying off. Since June Aidan has been climbing outside – not least at Trowbarrow where he’s done a number of hard blocs including Shallow Groove (Font 8b) and the first ascent of Seat at The Table (Font 8b).

Climber has been in touch with Aidan for the run-down on Outliers and to get Aidan’s view especially on the Font 8c grade which he gave it. Grading hard new first ascents is never easy but it’s good to see that Aidan has had enough confidence to offer Font 8c for Outliers rather than to be conservative and perpetuate grade compression.

Great effort on sending Outliers. It sounds like you were struggling with bad connies to get it done? How much of a battle on the actual send?

Cheers. The day I actually sent it we had pretty good conditions. The boulder came into the evening shade and with the help of a fan it became cool enough to feel almost like autumn. However, I’d had two previous sessions on very hot days where the moves had felt a little beyond me, though I don’t fare too well under heat. The nature of the sequence I used is very physical and requires some trying hard so I never experienced the romanticised feeling of floating gracefully through the moves with relative ease. Regardless I definitely felt I had a bit more left in the tank which was encouraging, I’ve never really delved into the art of projecting long term so intrigued to see what can be achieved if I apply myself to specific climbs.

So it’s a sitter beneath the infamous Atrocity Exhibition after which you ‘escaped’ out left?

Correct! The Atrocity Exhibition rather aptly seems atrocious. There seems to be some confusion as to where the line actually goes but I didn’t delve into its intricacies, perhaps a future project if its mystery can be unlocked.

Can you describe the key moves, please?

The first three moves are by far the hardest with some foot moves in a tenuous, shouldery position. It requires a strong left hand, making the first two moves off a small edge good fun, the second being a fun ‘One-Inch-Punch’ from a gaston pinch to a backhand edge in the roof. From here build the feet up onto a very high left hand smear before matching into undercuts in the roof and following the break out left.

So how long have you been trying it?

I tried it first a couple of weeks back and once more a week or so before I sent it. Figuring out the moves yet not feeling close. My improvement was far from linear, it seemed to go from a little futuristic to achievable between my 2nd and 3rd session.

‘Throwing big numbers about is a scary business’ you said but it’s good to see that you gave Outliers Font 8c based on ‘comfortably’ repeating Isla De Encanta afterwards which is ‘solid at the grade’ and more than grade between the two blocs. Well done for pushing the top end grades rather than compressing everything! Does it feel like you’ve burst through a ceiling?

A good way of wording it! Was definitely a barrier for me. My hope is to grade my first ascents as a fair reflection of their difficulty. It’s a dilemma for me as I understand that, in different areas around the UK and the world, overgrading can be the main issue but I feel undergrading can be as equally damaging and the consistency in grades around the UK has maybe been affected by this. Perhaps an issue no individual can solve but within the Lake District itself, I feel the grading is relatively consistent so hope to do my best to maintain this and believe that Outliers is the fairest representation of its difficulty. Time will tell and worst that happens is pride takes a hit but my hope is to preserve the grading system I have an impact on.

How important do you think Outliers is for the development of the Lakes and you as one of the leading boulderers of the new generation?

It’s one of a handful of projects around this level which I’ve had the pleasure of scouting out this summer so perhaps Outliers is useful for raising my confidence in time for cooler conditions. I feel these will add a valuable set of top-end boulders which I hope to inspire the coming generations and open up the Lakes to many as a world-class destination for UK climbers (and maybe even the odd international wad). I’ve begun to realise that there’s such high-quality bouldering locally so hoping, with our current social and environmental situation, to open people’s eyes to the quality climbing the UK has to offer and inspire climbers to travel nationally as opposed to excessive globe-trotting.

You finished off the day with ‘a victory lap’ on Shallow Groove, itself graded Font 8b and recognised as ‘notoriously hard’. Clearly a brilliant day?

A very specific boulder but another factor which led to me grading Outliers at Font 8c. It felt comfortable so acted as another comparison for me, also it’s an incredibly unique sequence with a fun one arm swing so always a pleasure to do!