As we reported late last night, Tommy Caldwell and Kevin Jorgeson have topped-out to make the first continuous free ascent of Dawn Wall on El Cap. 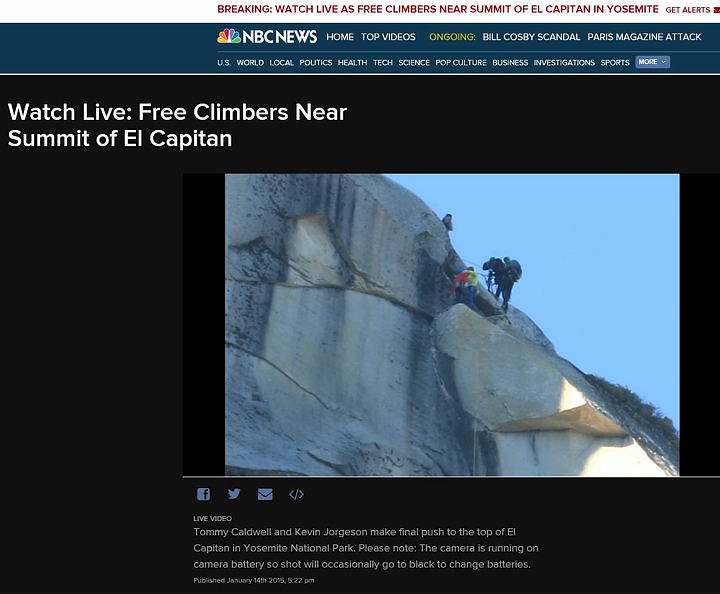 Here again (from the live feed from NBC) is the moment that Caldwell and Jorgeson stood atop the final pitch ending their 19 day historic continuous push.

In the full blaze of uber media coverage the two men stood side-by-side on top of El Cap at 15:22 local (23:22 UK time) on Wednesday January 14th, 2015. Standing there together they not only ended their six-year quest but they proved to both themselves and the world that Dawn Wall, thought by most to be impossible to free climb, was in free climbable with suitable skill and strength, tenacity, support and perhaps a bit of luck in the form of an un-seasonably good weather window. 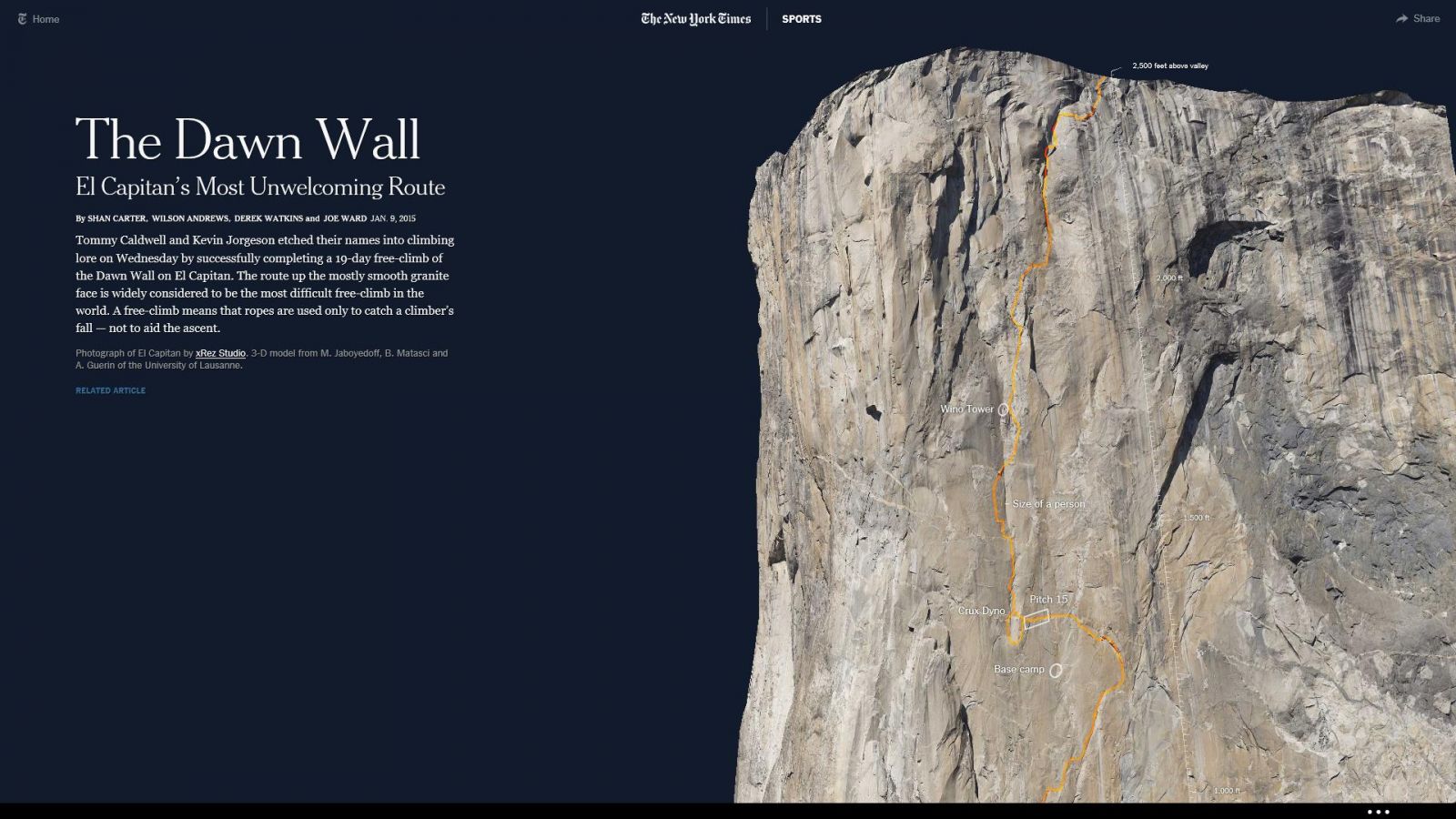 A stunning interactive graphic has been uploaded to the New York Times website with all the main features laid-out on the 2,500 foot wall. Click through here to see that in full… Plus the topo and line of the route below: 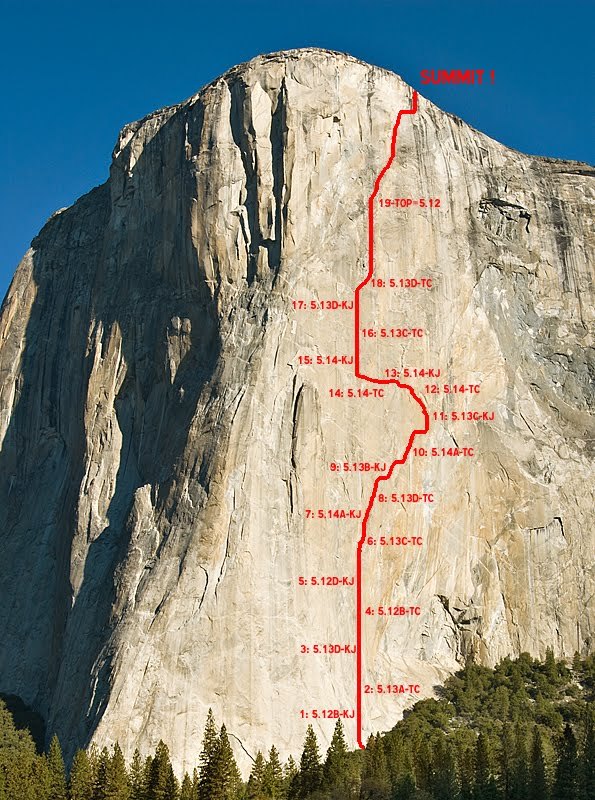 As long ago as 1988 Todd Skinner and Paul Piana first free-climbed a major route on El Cap when they freed Salathe Wall. Since then, numerous other free ascents have been done of various difficulty. Prior to Dawn Wall, one of the hardest routes ever completed was done in 2010 by Brit’s Leo Holding and Jason Pickles when they did the first free ascent of The Prophet. Their siege spanned no less than nine years in total! El Cap history is littered with impressive climbing feats and Caldwell and Jorgeson had just added their names alongside some of the great Yosemite climbers.

Caldwell was already a frequent entrant to that list of history-makers given his numerous free ascents of major hard routes in Yosemite Valley in the past. Jorgeson’s name will be added alongside Caldwell’s for the first time. Caldwell’s ascent of Dawn Wall went relatively smoothly; sadly for Jorgeson however, his ascent was hanging in the balance by pitch 15. Only after 11 attempts over seven days did he finally succeed on pitch 15. It seemed that it would be his nemesis for a while but climbing with battered and bruised finger tips he fought very hard to replicate Caldwell’s redpoint and only with the upmost perseverance did he come through. (See here for our previous report up to that point). Following Jorgeson’s ascent of pitch 15 on Day 14 Jorgeson raced up pitches 18 to 20 to pull back level with Caldwell at Wino Tower.

Once re-united at Wino Tower, the pair have taken just two days to dispatch the final 11 pitches. Day 18 (January 13th) saw them climb seven pitches (21 to 27) up to a bivi on The Ship’s Bow. Yesterday, Day 19 of the continuous push, they had a mere four pitches (28 to 31) to climb to complete the first free ascent of Dawn Wall, a route that is now considered one of, if not the hardest, multi-pitch route in the world today. 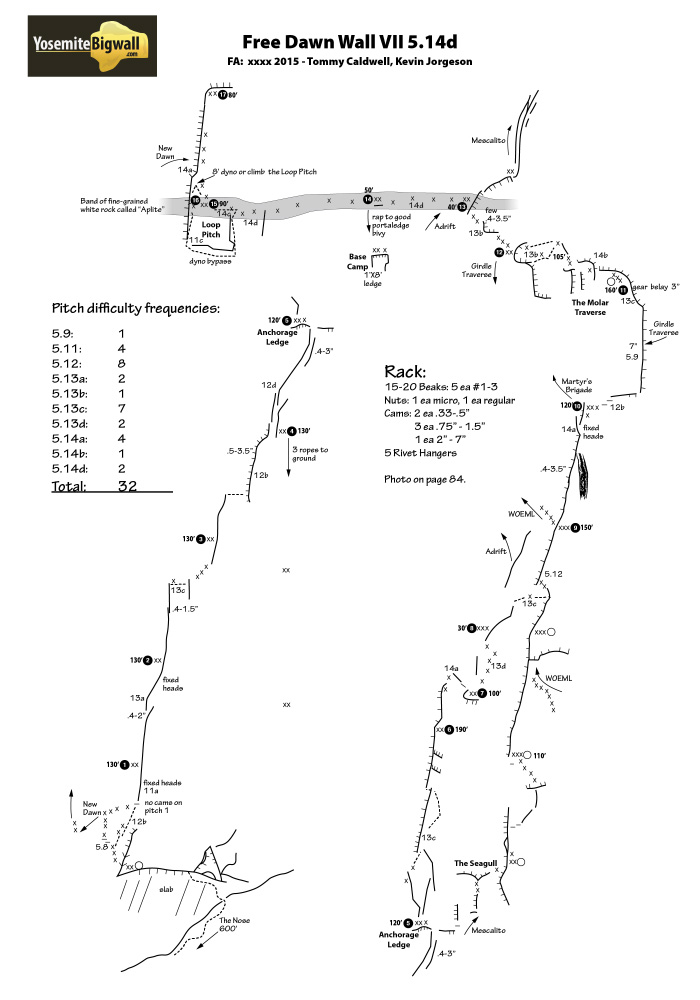 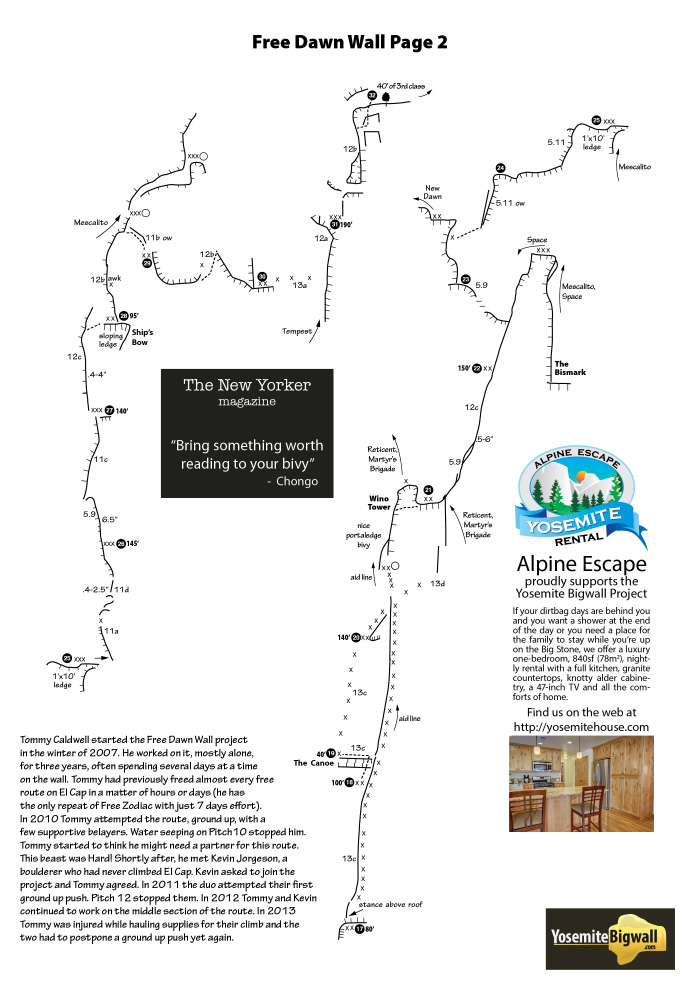 Click through here to go to YoemiteBigWall.com for a fully-fledged topo of the Caldwell and Jorgeson line.

A full report and analysis of Caldwell and Jorgeson’s ascent will appear in the next edition of CLIMBER magazine.