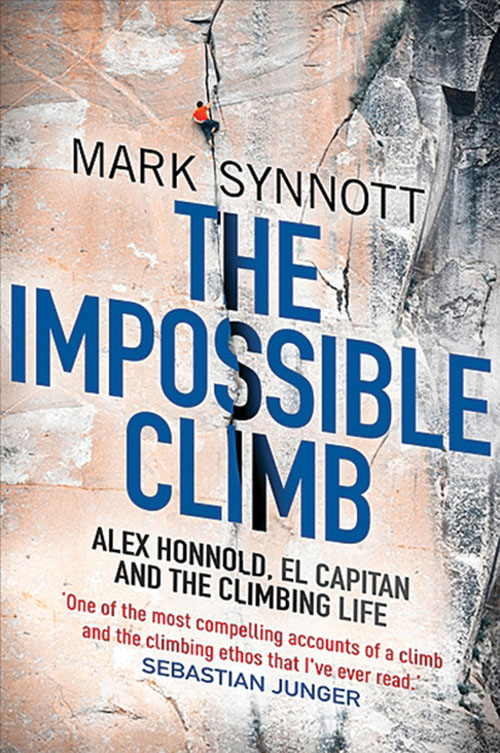 A little over two years ago, and after a decade or so of preparation, Alex Honnold free soloed Freerider on El Capitan. It was a preposterous solo by an incredible climber not only at the very top of his game but living on the very edge. Despite the hair-raising solos by Peter Croft, Dean Potter and others, absolutely nothing like a free solo of Freerider had ever been achieved before.

Of all the comparisons with other epic achievements that have been made perhaps ‘like Neil Armstrong walking on the moon’ hits the scale of Honnold’s achievement. It doesn’t, however, get close to the personal risks involved. More graphic – and arguably closer to the mark – is the analogy which has been made of Honnold’s solo effort to someone competing for an Olympic gold medal only to die if they fail. Perfection or death. Yes, we’ve all seen the Oscar-winning film Free Solo so we know – or think we know – what was entailed in Honnold’s amazing free solo. The Impossible Climb by Mark Synnott is, however, the full back story to Honnold’s epic climb which he completed on June 3rd 2017.

Synnott starts his book with a conversation with Jimmy Chin in which Chin describes Honnold’s intention to attempt to free solo Freerider and Chin’s intention to film the attempt. You can almost see the incredulity on ’s face as Chin shares with him Honnold’s intention. What is even more remarkable is that Synnott was already aware that it was Honnold’s dream to free solo El Capitan; it was just that he’d dismissed it. He writes, ‘I knew it was Alex’s dream to be the first to free solo El Capitan – I just never thought it would actually happen’. Then explains exactly how he already knew, ‘When I took him [Honnold] on his first expedition to Borneo in 2009, he confided to me that he was thinking about it’.

It’s still only page three of the book and already the reader is introduced to the back, back story of the book. Synnott isn’t just any random journo that is writing about Honnold’s amazing climb – there’s clearly some history involved. Flicking to the dust cover and the About the Author text we start to uncover the extent of Synnott’s involvement in the whole story. Yes, Synnott has scribed for some mighty publications – National Geographic would ultimately send him to Yosemite to cover Honnold’s free solo of Freerider but Synnott is also a long-standing member of The North Face Global Athlete Team and one heck of a well-connected and well-climbed dude in his own right. It is then that the penny will start to drop for the reader, Synnott wears not one but two hats in this, the incredible story of Honnold’s free solo, as he is both the writer/recorder of the story as well as a protagonist.

And so Synnott begins the story, delving deep into his own development as a climber as well as that of the Stonemasters, Dean Potter, numerous other contemporary climbers, as well as Alex Honnold himself. Synnott paints a truly fascinating account of the scene including the interplay between sponsored athletes and their sponsors in addition to the pressures of climbing whilst facing sponsorship issues. Roughly speaking, the initial third of The Impossible Climb sets the scene for the reader, all the while Synnott, with the skill of a master craftsman, weaves into this text stories about Alex’s climbing. It may seem a little strange at first that all this back story should be included but Synnott is building the story and it is fascinating reading.

Chapter Six, The Secret Weapon, Mr Safety, and Xiao Pung, is where Synnott recounts an expedition to Borneo with Alex Honnold, Jimmy Chin, Conrad Anker and others. British readers will doubtless recall the ill-fated British Army expedition to Borneo’s Low’s Gully. It’s Synnott’s first encounter with Honnold and it’s highly informative. It’s just six months after Honnold’s free solo of Half Dome and it is a pivotal moment in the book, not least because at the end of their first meeting in a hotel room in Kora Kinabalu (KK), Synnott fires the crucial question into Honnold: “So what about El Cap?” He explains to the reader, ‘It was an obvious question to ask, though somewhat impertinent’.

Synnott is in KK as the expedition leader on a climb out of Low’s Gully but it establishes him as a climber-cum-investigative writer which is ultimately his role in this context. In itself, the chapter is an interesting read and, as perhaps the real scene-setter to the whole book, it’s an instrumental chapter. Although Honnold was by that stage the best free soloist in the world, he clearly was learning lots of stuff about expeditions from Synnott, Chin and Anker – the 'Silverbacks' on the team. Whilst Synnott, Chin and Anker were clearly impressed by Honnold’s climbing on that expedition, Honnold was reluctant to admit that he’d learned stuff from them, and it nearly caused a fatal rift between the team. All turned out well though when, on reflection, Honnold accepted the wisdom of the older climbers.

From Chapter Six onwards Synnott develops Honnold not only as a climber and the amazing free soloist that he is but also as a person and as a founder of the Honnold Foundation. Synnott drives the story forward talking about the first ascent of The Dawn Wall, the MRI scans looking into Honnold’s amygdala, his free solo in the Taghia Gorge, his developing relationship with Sanni his new girlfriend and then ultimately – his preparation for his amazing solo of Freerider.

The Impossible Climb is without a doubt an insightful book, more wide-reaching than perhaps you’d think, but Synnott uses his experience both as a climber and as a writer to paint an incredible canvas. The Impossible Climb is not to be missed. Very definitely, it’s another unmissable chapter in the story of climbing and the most audacious solo ever achieved by anyone.