The Burgess Book of Lies

by Adrian and Alan Burgess 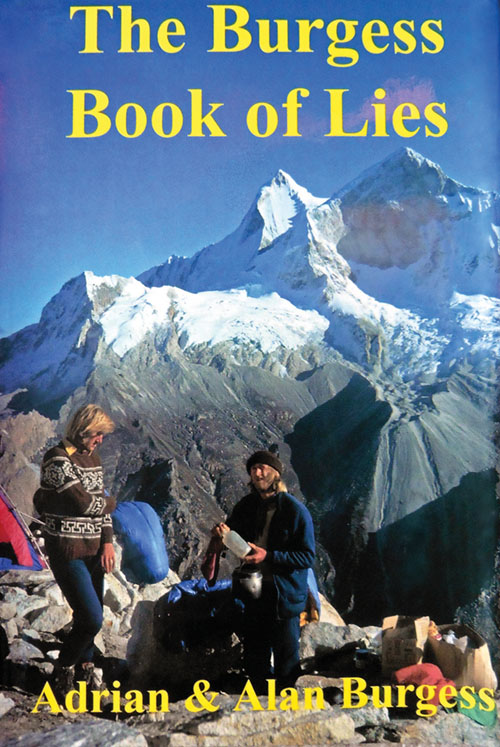 Adventure was always the objective. There was great fun to be had and important friendships made it all even more worthwhile. They were young, a little wild, crazily ambitious and they felt invincible.

Adrian and Alan Burgess were born in Holmfirth, West Yorkshire. In The Burgess Book of Lies, the twins lead us through their incredible lives in the mountains. As youngsters, Adrian and Alan joined the Phoenix Mountaineering Club and climbed with John Stanger in Britain and the Alps. As early as 1966 they experimented with climbing simultaneously rather than alternating belays. It was dangerous, at the time certainly broke with tradition but proved successful.

The writing of the numerous chapters is shared by Adrian and Alan who both write passionately about their early epics, about learning how to acquire food and drink when money was scarce and how to survive the occasional brawls in pubs and bars that seemed a part of some climbers’ lives at that time.

The twins travelled to Canada climbing with Bugs McKeith who introduced them to using aid slings attached to Terrordactyls to climb frozen waterfalls. They ascended the Cassin Spur on Denali with Tut Braithwaite and Paul Moores. This story concludes with the climbers finding 500 cans of beer in a local hotel and ending up in court.

Adrian and Alan ventured to the Himalaya at a time when trekking and climbing in the area was still relatively new. Communications were poor and there was little if any chance of rescue. Adrian recounts in fascinating detail the attempt made on the West Ridge of Everest by a British team during the winter of 1980-81. The team was made up of some of the finest British climbers of their generation. They were fun-loving young men and thoughts of climbing filled so many of their daytime and sleeping hours. They battled through normal life to pay for the opportunity to make possible what had not been achieved before. Everest was brutal that winter and a mighty battle was endured.

The book also recounts tragic events on the mountains. Adrian writes poignantly of terrible times on K2 in 1986 and Alan describes, in quite harrowing detail, the loss of a Sherpa friend on Cheo Himal in 1990. Adrian concludes that when you climb in the Alps or Himalaya you always need to be aware that ‘… dangers lurk everywhere’.

The Burgess Book of Lies is an enormous book at 463 pages. Certainly, its greatest strength is in its honest and empathetic telling by the identical twins of their truly remarkable relationship. There is a pleasing freedom in the writing of both Adrian and Alan as they have surely enjoyed in their lives and in their climbing. The twins tell it as they saw it, warts and all. The text is light and simply told but it is always informative, describing significant ascents, examining the motivations to climb, loss of friends in the mountains and treasured friendships with the Sherpas of Nepal.

The book captures so many climbing and social changes during a period of over 30 years. It remembers the achievements of not just Adrian and Alan but of mighty young climbers like Brian Hall, Paul Moores, John Porter, Alan Rouse, Doug Scott, Joe Tasker and many more. It is, in some ways, a fine tribute to an extraordinary period in British climbing. Life, work, holidays, friendships, relationships all revolved around climbing. Adrian and Alan have written of great men during significant times and of a passion they shared which carried them around the world. Life was at their feet and every day offered captivating adventures into the challenging unknown.