Vicky Moody has used it for a while and gives her thoughts on it. 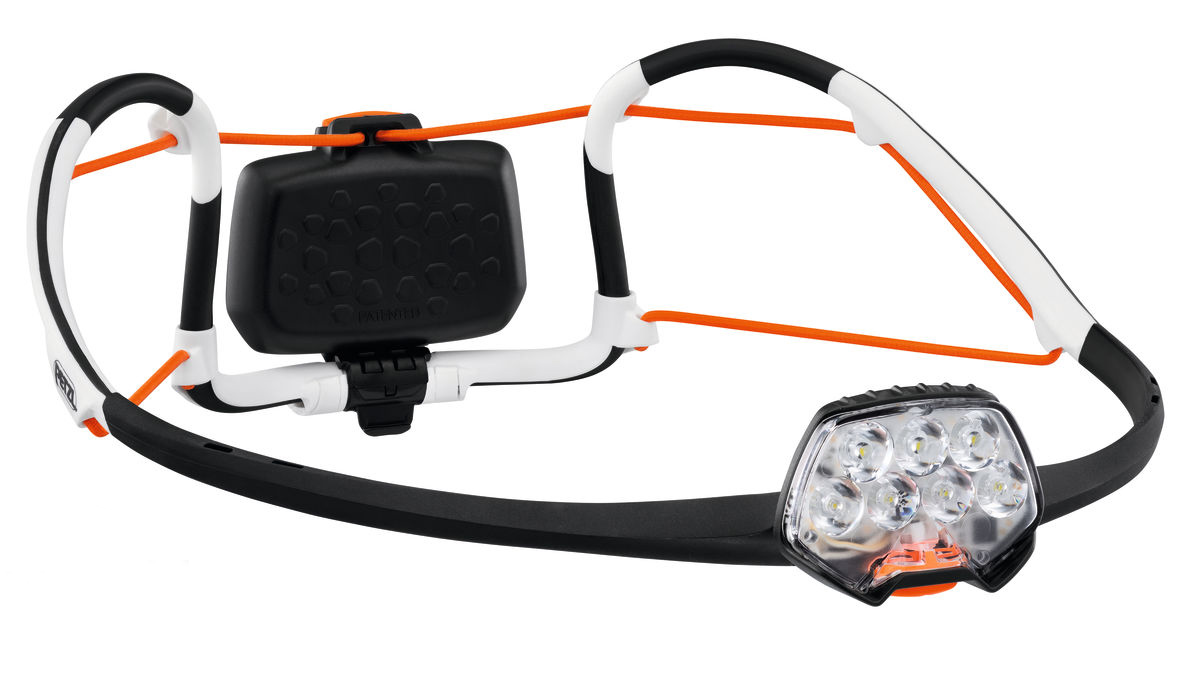 Petzl’s IKO Core has a lot to offer for the all-round outdoor/climbing enthusiast despite being aimed at the trail running market. The IKO Core (the core part of its name coming from its rechargeable battery core unit) sits in Petzl’s performance range of headlamps.

It stands out from its competitor's thanks to its innovative Airfit headband. At first glance, it might look a little like a child’s gemstone set tiara but this torch is really about the beam, not the bling. Unlike the traditional wide elastic web bands of most torches, the IKO Core features a lightweight bendy-plastic band instead. The benefits of this mean that you don’t suffer chafing from sweaty or soggy elastic (a definite bonus for trail running or walking out when you’ve been rained off a climb) but it is also far more rigid and thus less prone to the annoying bouncing beam caused by a jiggling headtorch when moving at a pace. The lamp unit itself is surprisingly small given the punch it packs. This, teamed with its super light (79g) weight and rear-mounted battery pack, leads to a very stable light.

Thin elastic is used at the rear to pull in the torch to fit which gives a much greater sense of control than the traditional resizing method. The only downside is that the thin elastic could dig in and prove uncomfortable for those without hair to pad it out. Whilst it is very easy to tighten the band (even with gloves on) it’s slightly more difficult to slacken off. This, however, is unlikely to be a requirement during use.

The IKO Core doesn’t claim to be helmet compatible but we found it will fit on smaller helmets. It happily sits my Mammut El Cap (52-57cm) but wouldn’t fit around the Black Diamond Vector which is designed for a comparable head size of 53-56cm. This might rule it out for those who are likely to be using the headtorch whilst climbing.

However, the flexibility of the IKO Core means that it can be also worn like a necklace: thus, in my opinion, helps preserve your depth perception by having the light below eye level. Unlike most torches which sag down and tend to illuminate your body and feet rather than the ground in front of you when worn around the neck, the innovative rigid structure of the IKO Core means that it’s easy to make sure the light shines straight ahead rather than straight down.

With a standard burn time of 9 hours, this torch should see you through the walk off the mountain (its 45m range means you’ll have no difficulty finding your way) and back to camp with plenty of juice left to light your dinner. Using the torch on max power gives an impressive 500-lumen strength and a range of 100m but it limits the usage time down to 2.5 hours so it’s best used in short bursts when really needed. 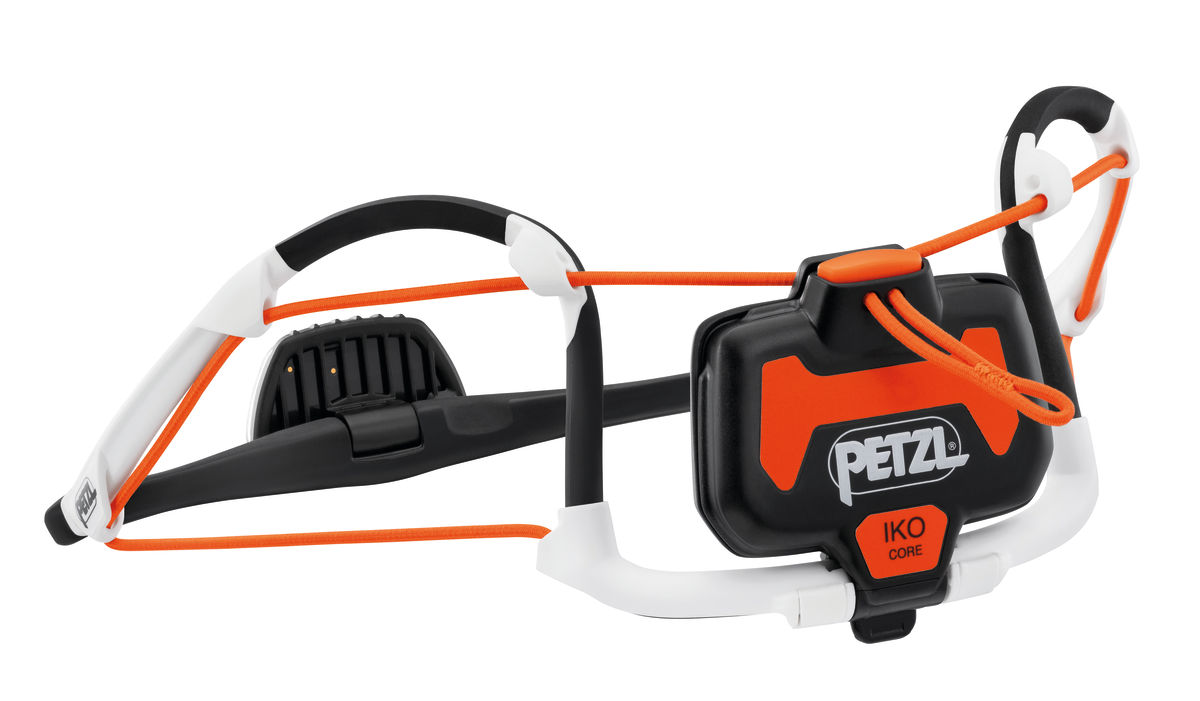 Both IKO (not reviewed here) and IKO CORE are hybrid; the CORE comes with a rechargeable battery which is a handy advantage over the regular IKO. This hybrid power source means that it can be powered by either its 1250mAH rechargeable core battery or 3 x AAA batteries – although using the standard batteries does reduce its maximum power outage to 350 lumens.

The rechargeable battery takes around 3 hours to fully charge and it is rather fiddly to extract from the headset but it does mean that you don’t have to carry lots of regular batteries with you. However, you should never be caught short of charge as each time you turn off the torch it flashes a coloured light at you to let you know its power status: green for good and red means it’s ready for a recharge – whilst charging, a display built into the battery also helps to let you know when it’s completed charging.

The battery is charged by a standard USB to mini USB cable (which comes with it although you’ll need your own wall plug adaptor) so it’s easy to charge in the hut or via a power bank. If you don’t have charging facilities with you, then you’ve always got the old school option of using the trio of AAA batteries.

The reflective back to the battery pack provides an added safety element when running on roads – or walking back to the campsite from the pub. 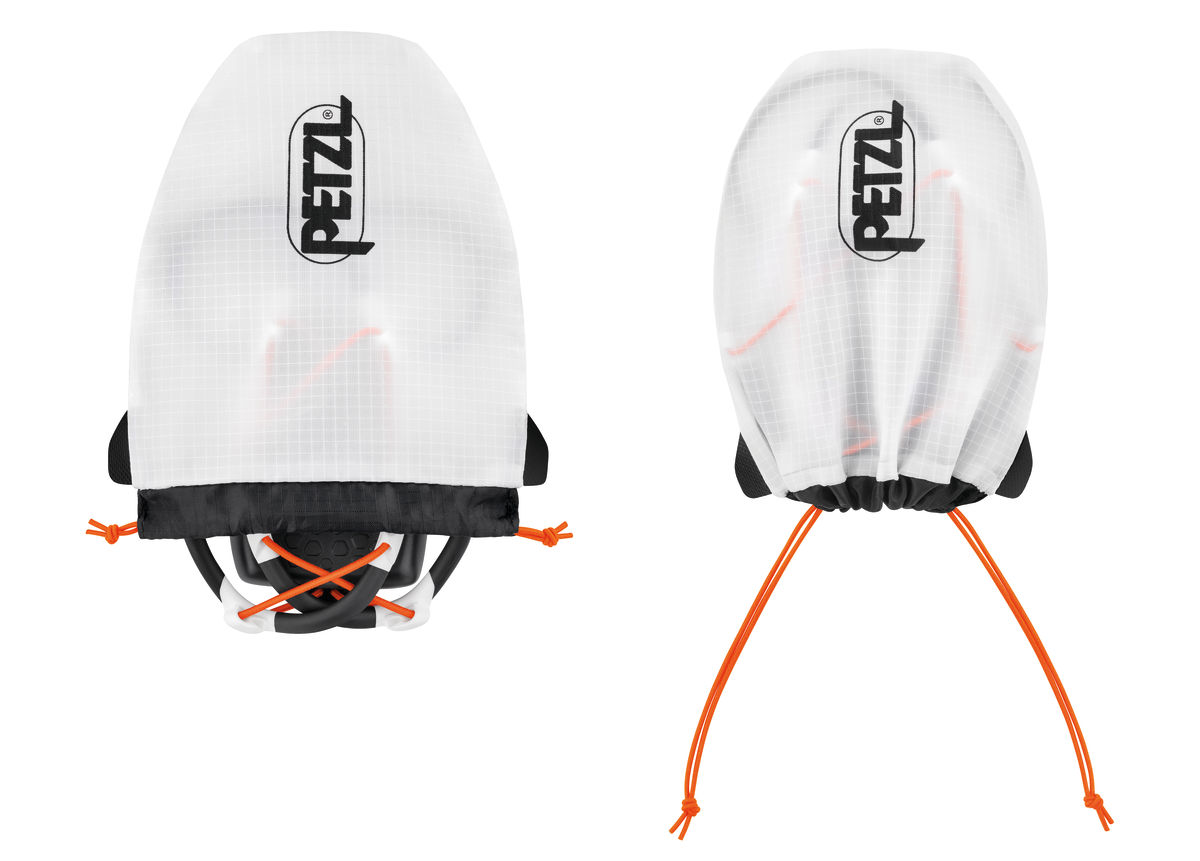 Particularly handy is the special storage pouch which allows you to convert the headtorch into a lantern by simply popping it inside. The pouch works to soften and diffuse the light and the elasticated drawstring makes it easy to hang up in a tent.

When you are finished using the torch, it snaps together to compress into its storage pouch for transport. The lock feature on the torch (simply hold the button down for 4 seconds) means there is no chance of it turning on and draining its battery in your pack – which is where you’ll want it as, despite its small size, the way in which it compresses means it’s more awkward to stuff into a pocket due to its rigidity.

All in all the IKO Core is a great upgrade or addition to your fast and light collection providing flexibility of power source, stability of fit and strength of beam.