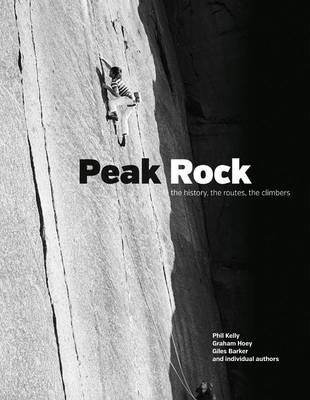 Successful climbing history books are very rare. Most of climbing history is documented in magazines, club journals and guidebooks with increasing amounts on the Internet. This does, however, mean that those without a garage full of old magazines and guidebooks (guilty) tend to miss out on many of the fantastic photographs and tales that are included in them. So it is appropriate that this book draws heavily on the legacy of this material in its development with many of the original protagonists contributing words or photographs.

To compile this book the authors conducted an extensive range of tape-recorded interviews with first ascensionists and onlookers. In the text the authors have often chosen to let the participants speak with their own voices. This often reveals the striking changes of attitudes and ethics and also widely differing recollections of events. This adds appreciably to the interest of the book and, of course, many of the stories are good.

But it is the photos make this large-format book something special. It is hard to imagine a better set of photographs to illustrate the history of Peak climbing. Here the authors really demonstrate their wide knowledge of published material and their equally wide range of contacts in the Peak District climbing community.

They have managed to retrieve many outstanding photographs which were initially published in guidebooks and magazines. Anyone who has been involved in climbing publishing will know the difficulties of tracking down that classic image from the hundreds of slides climbing photographers have accumulated or have mislaid on its return from first publication. Often where a satisfactory first ascent photo has been unavailable a photo of a modern ascent has been successfully used to illustrate the narrative. Many of the older photos highlight the changes in protection, footwear and attitudes to route preparation over the years. The photo of Downhill Racer after its disgraceful ‘cleaning’ is still shocking after all these years.

Although the bulk of the book deals with events occurring after the publication of the previous history of climbing, High Peak by Byne and Sutton published in 1966, the authors have contributed many interesting early climbing photos and portraits. I think some of them, particularly from the Biven collection, appear in print for the first time.

Peak District climbers have had a deserved reputation for insularity. The achievements of outsiders have often received a highly sceptical treatment. The book attempts to redress some of this directly. So characters who were controversial at the time such as Ed Drummond, Mick Fowler, the Woodward brothers and John Dunne are given a more sympathetic treatment. On the debit side, the text is a little uneven in places; it could probably have done with another final proof reading to get rid of the occasional typo; occasionally the reader has to work to determine exactly who it is who is being quoted. This is not intended to belittle the quality of the book and the vast amount of work that has gone into it. Its production is a fantastic achievement. Fifty years on after High Peak the history of rock-climbing in the Peak District has finally been documented again having surprisingly missed out on Geoff Milburn and Trevor Jones’s climbing histories.

At the currently rumoured rate of sales and by the time this review appears, the first print run will probably have nearly sold out. If you have any interest in Peak District climbing, or even UK climbing history in general, buy this book. You will not be disappointed but then again I guess that most people with an interest in Peak District rock climbing will already have theirs.