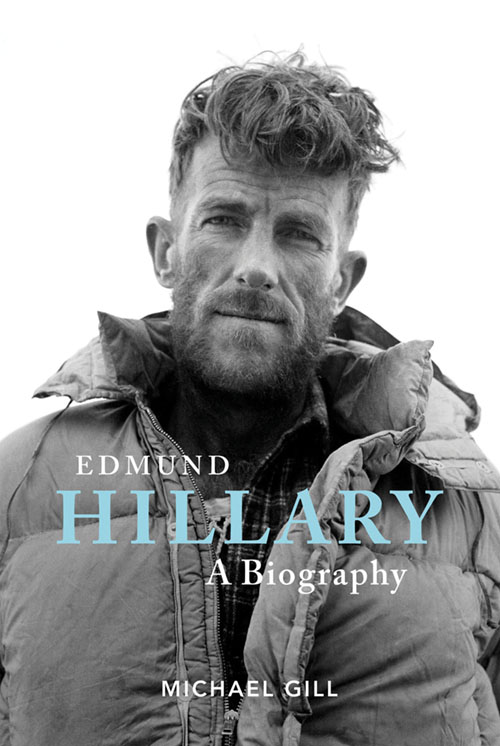 We remember ‘firsts.’ The first film I ever saw in colour was The Ascent of Everest in 1953. I was still at primary school and my dad took me to the local cinema for the first (and last) time. He told me that this was one of the greatest feats of the century. Edmund Hillary and Tenzing Norgay were on top of the world in more ways than one – this was as big a first as you could wish for – first to stand on top of the highest mountain on earth.

This is a fascinating biography of a remarkable man – from beekeeper to mountaineer, explorer and philanthropist, author and diplomat. If you like your biographies meaty, you won’t starve with this well-researched and comprehensive account of the lantern-jawed, rugged Antipodean on the cover. The author, fellow New Zealander Michael Gill, was a personal friend of the family for 50 years. You might wonder if a close friend can be a truly objective biographer, but Gill seems to have pulled this off, having had the advantage of access to family letters and sources. Hillary published eight books over his lifetime, and the 1953 Everest ascent has been recounted by many others. But Hillary’s life story did not simply lead up to the summit of Everest – what came afterwards makes for a full and action-packed life.

As a young man, like so many others, Hillary’s father went off enthusiastically to war in Gallipoli, fired up to do his duty, and came home a staunch pacifist. His diary extracts reproduced in the book are riveting. Hillary’s outdoor childhood appeared happy, although his journalist and beekeeper father was strict. His influence on Hillary and his brother was strong – both boys became conscientious objectors at the start of the next war, although Ed eventually signed up as a navigator with the NZ Air Force before the end of hostilities.

His climbing life began in the Southern Alps and he made the first ascent of the South Ridge of Mount Cook. A trip to Europe and the Alps, and meeting key people in the mountaineering world, notably George Lowe and Eric Shipton, put him on the invitation list for an Everest reconnaissance in 1951, and subsequently on the eventually successful 1953 expedition.

Gill digresses in his biographical account to describe the history of early Everest expeditions before using Hillary’s diary extracts to provide a cogent account of the final success. The technically difficult rock tower which proved to be the key to the summit is known to this day as the Hillary Step. What comes through this particular account is the issue of mountaineering politics within expedition teams – who is allocated which tasks, who will be on the first or subsequent summit bids?

It’s no spoiler to say how it ended. Everyone knows. Hillary’s life thereafter was a succession of plaudits, honours, lecture tours, books and celebrity. Soon after he received his knighthood, he married Louise Rose and had three children. He returned to the Himalaya and suffered injury and illness on an attempt on Makalu, and played a key and controversial role in Vivian Fuchs’s Trans-Antarctic Expedition (where Hillary added the South Pole to his credentials but fell out with Fuchs in the process). In this section, Gill subtly expands on the more competitive and combative aspects of Hillary’s personality. Further trips to the Himalaya prompted his enduring philanthropic work to help the education and healthcare of the Sherpa communities to whom he felt he owed his fame and fortune. Tragically, his wife and 16-year old daughter died in a plane crash on their way to meet him at their new home in Nepal, leading to an understandable period of depression and loss of direction.

Eventually, Hillary renewed his aid work through his Himalayan Trust, made a series of films and engaged in further expeditions, including a yeti hunt and a trip up the Ganges from mouth to source. He dabbled, initially unsuccessfully, in New Zealand politics but was appointed as High Commissioner for his country in Delhi in 1984. He married again, to a widow of a friend who died in a plane crash in Antarctica.

Hillary died in 2008 at the age of 88. He may well be best remembered for the first ascent of Everest with Tenzing Norgay, but he gave so much more to humanity in return for his success. The author has tied together the strands of Hillary’s full life with great skill.

This is an excellent, highly readable, well-researched and comprehensive biography of a remarkable man.