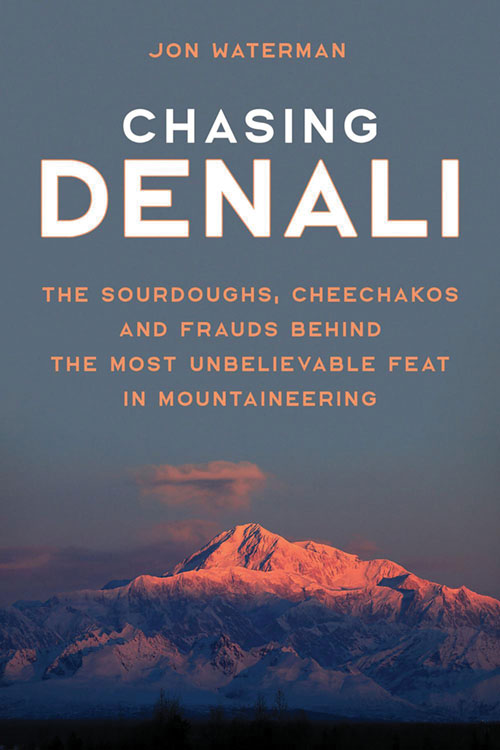 Jon Waterman returned home to Denali in 2016. It was a time of reflection, looking back over 40 years and reassessing dreams, ambitions and stories of this mighty mountain. He had been inspired by the flag-carrying Sourdoughs who had climbed the mountain in 1910 but now Jon wondered if their story could possibly be true. The Sourdoughs had completed a final push climbing over 8,000ft to the North Summit and returned in just 18 hours. Jon would celebrate his 60th birthday on Denali but, as he headed into the clouds, the Sourdough men, and some lingering questions about their remarkable ascent, filled his mind.

Chasing Denali follows Jon’s personal journey on Denali and his retelling and re-evaluation of an extraordinary time in the history of the mountain that has played such a huge role in his life. We read of Frederick Cook and his claim to have reached the South Summit in 1906, the Sourdoughs led by Thomas Lloyd who climbed to the North Summit in 1910, an expedition led by Belmore Browne and Hershel Parker towards the South Summit in 1912 and the Hudson Stuck team in 1913 that, finally, reached the highest point on Denali and brought back conclusive evidence of their achievement.

Evidence is largely what this book is all about. It seems to the reader that telling great tales of these adventures often clouded what actually happened in reality. These men were pioneers rather than mountaineers and they were happy to bring back stories of success that were not always what they seemed to be. The beckoning of fame obscured good judgment and storytelling was surely embellished to make the glory appear even more glorious. A good story was often more captivating than a true one. It is interesting to read that even more than 100 years ago, the pressure to succeed, fill newspaper pages and create great bar room drinking stories was enormous.

These intriguing tales of early 20th Century exploration have been written about and debated many times and the stories are generally well-known. In this book Jon undertakes a determined search for any undiscovered information that may help to verify the account of the four men who he had grown to respect and admire. Jon was initially frustrated by his research. Was there anything else to find? How did the Sourdoughs climb so fast and why was their flagpole only seen once? Jon perseveres and delves and searches until eventually he discovers some very interesting pieces of new evidence to support the amazing achievements of his heroes, the men who, at times, had pushed him to success and survival on the mountain.

Chasing Denali is a meticulously researched book. It describes the many wonderful years of one man’s wanderings and wonderings in the mountains. At times, the reader feels that Jon would have happily been a part of this fine age of the pioneers and their early exploration of Denali. They were simple times when brave men with little technical knowledge of mountaineering reached where no one had reached before. Jon stood on the top of Denali in 2016. He felt at one with the men he had travelled with, but he also thought of the explorers who had challenged what they could have barely understood and who achieved ascents, in some ways, decades ahead of what should have been possible. The early adventurers told almost unbelievable stories but those are often the type of stories that mountaineering offers. Denali remains a mountain that holds more extraordinary tales than most. Jon had climbed Denali again and he had stood with his heroes. Denali was a fine mountain and Jon was pleased to share it with the remarkable men who had led the way.